John Albert - The Secret is Out 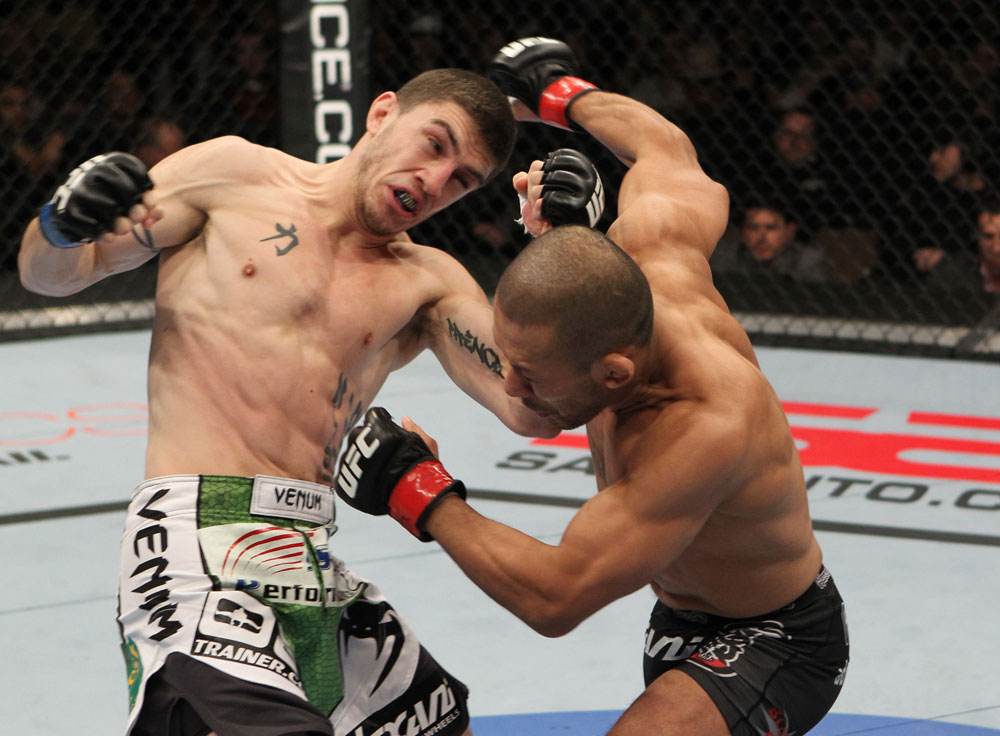 As far as John Albert was concerned, being a part-time fighter was just fine with him. He was working a full-time gig as an electrician, training on the side with UFC vet Dennis Hallman, and getting fights when he could simply because it was something he loved doing.

There were no thoughts of fame, fortune, action figures or trading cards. Fighting at the local casino in Washington was enough fame, and he was content with that.

“I actually never thought about making it this far,” he said. “I’ve had people tell me that I’ll make it, but I came into the sport just trying to have fun and stay in shape. I graduated high school and was just lifting weights and was like ‘man, this is boring.’ Then a buddy brought me into it, and I met Dennis, who I feel he’s the best coach in the Northwest by far, and he’s helped my game. So I just had fun with it and I loved doing it and I was thinking I’m gonna be that local pro forever, just putting on these shows, working full-time and going down and fighting in the Emerald Queen (Casino).”

But if you’re reading this right now, you’ll already know that his story took a turn, one that will see him fighting in the UFC’s Octagon for the third time this Friday against Erik Perez. There are no more electrical jobs for the 25-year old, only hours and hours of training to prepare himself for fights that will pad his bank account and build his reputation. Eventually, if he keeps on the right path, he will get a shot at achieving a new goal, one that goes far beyond being a big name on the local circuit.

“I set a realistic goal as soon as I got that call to be in the UFC that in four years I’d like to actually win that belt,” said Albert. “It obviously can come sooner than that, but as of right now I just want to focus on winning fights, making some extra money, and progressing that way.”

Funny what six weeks on a reality television show can do for you, but while the TUF14 experience opened the door for the Puyallup, Washington product, it was his performances in his subsequent two fights that opened eyes around the MMA world.

First up was his 69 second blitz of castmate Dustin Pague on the TUF14 finale card last December, an impressive showing no matter how you look at it. But the real revelation was Albert’s February bout against veteran Ivan Menjivar. Leading into the fight, many wondered whether Albert, just 7-1 as a pro, had what it took to just hang with Menjivar, let alone beat him. But once the bell rang, “Prince” Albert showed that he belonged on the world stage, and even though he didn’t beat his opponent, it wasn’t from a lack of trying, as he almost had Menjivar beat on a couple occasions, only to have the Canadian roar back and eventually finish the fight via rear naked choke at 3:45 of the first round. It was a loss on Albert’s record, but nowhere else.

“I took so much away from it,” he explained. “Win or lose, it was gonna help my career fighting a top contender in the world, and I put on a great show and showed off my skill set.”

That he did. Owner of four wins by knockout and three by submission, Albert has no intention of going the distance when he signs for a fight, and usually, if he gets you hurt, he gets you out of there. So when he rocked Menjivar, he assumed the end was near, so he emptied his clip and his gas tank. And Menjivar didn’t go anywhere.

“That was the first time I’ve been in that situation where I haven’t actually put a guy away,” he said. “I’ve either knocked him out or submitted him real quick, and I’ve never had someone in that position where I’m continually beating on him, and it’s just not done. I completely blew my wad. I know I’m in great shape, I train extremely hard, and everyone’s like ‘oh, you gassed out,’ but there’s a difference between being tired and completely giving everything you have to finish a guy, depleting your tank, and then you have nothing left, and that’s kind of what happened. I rewatched the tape, and I punched him literally 30 times with 10 knees, and then I counted that last flurry where I posted on his shoulder and just hit him with uppercuts: 10 unaccounted punches.

“Then my arms just gave out, and I did the one thing that I tell everybody from my gym not to do, and that’s jump guillotine. Because unless you’ve got super strong arms, it’s a lot of body dynamics. Some people are good at them and some aren’t. So I tell people don’t jump for guillotines; that’s the worst thing you can do because you’re giving up position. And I was so spent, that’s what I did. All thought went out of my head, there was no rhyme or reason going on, it was just a desperation move because I had nothing left. I couldn’t punch him anymore, so I figured maybe I could choke him out, and it was the worst decision I made in the entire fight.”

It was a painful lesson for Albert to learn, but the important part of it is that he did put that fight in his back pocket for future reference if he’s in that situation again.

“I’ve learned how to control myself a little better,” he said. “If I get into that position where I’ve completely hurt a guy, I’ll pick my shots, slow down, and I can control myself. There’s no reason to completely explode; it will eventually happen.”

Of course that’s easier said than done, especially when you smell the blood in the water and know that you’re one punch away from doubling your paycheck and possibly picking up a post-fight bonus as well. That’s a lot to be thinking about in the heat of battle, so taking a deep breath and calming down is probably not high on the priority list. Plus, there’s no way to replicate that situation in the gym, so Albert will just have to hope for the best if placed in the same predicament.

“You can’t ask your teammates, ‘hey, I’m gonna bomb on you as hard as I can, then pretend that you’re out, and then I’m gonna try to control myself and pick my shots,’” he laughs. “You push yourself to the limit every single practice to get yourself better, but I feel you can never push your body to 110% exertion and then try to put somebody away. But that’s just how I fight – I want to put the guy away and I want to put on a show, so I don’t really know if things are gonna change, but I know I’m gonna try to and fight as often as I can.”

That last wish has been granted, as Albert will be stepping into the Octagon for the third time in six months against Perez, a late replacement for the injured Byron Bloodworth. It’s an interesting spot for Albert to be in, because Bloodworth already had a little UFC name recognition from his debut fight last October against Mike Easton, while Albuquerque’s Perez is a relative unknown whose deceiving 10-4 record includes five straight wins.

“I thought about that for a second and it went through my mind, but I look at it as this is a better fight for me than the Bloodworth fight,” said Albert. “Bloodworth’s a tough guy, but he’s only 6-2 and he lost his last UFC fight. This guy just won five in a row and he just beat Europe’s number one contender (Paul McVeigh). You see guys who start their career out with a bunch of losses, and then they just keep winning because they become better martial artists. So people who follow the sport and really understand it, will understand that this is actually a good fight, the kid’s really good, and the win is a good win. It’s not like a ‘throw me the bone fight’ for sure.”

As for the late switch in opponents, Albert was unmoved by the whole ordeal.

“There are a couple of mental issues that I had to persevere through because mentally I had trained for one opponent, but in retrospect, not a whole lot changes because I train all aspects of mixed martial arts and I train to be the best,” he said. “I don’t train to be better than one guy or train to fight specifically against one guy. There’s some gameplanning involved, but I can never look at someone’s past fights and expect them to fight the exact same because the way the sport evolves, they should be progressing and changing up their fighting style. I feel like Erik, from his last fight, is gonna be a better fighter, and I just gotta be ready for everything.”

That calm comes not just from Albert’s out of the ring personality, but from his time in front of the cameras during the TUF14 taping, his work in the gym with Hallman, and perhaps most importantly, a lengthy amateur career that has him a lot more experienced than most up and comers with nine pro fights.

“We’re really progressive in that and big believers,” said Albert of the extensive amateur scene in the Pacific Northwest. “We started a long time ago, and Chael Sonnen said he was one of the first in the Northwest to start it, and Randy (Couture), Dennis and those guys have been doing it for over 20 years. It seems like it’s been underground, but it’s been our mainstream fighting sport for a long time and we’re really into development. I’m only 7-2 in my pro record, but I’ve actually had 15 amateur fights, and it’s just how we progress, and I think that’s what makes us tougher fighters.”

It’s also made John Albert someone who isn’t going to sneak up on anyone in the bantamweight division anymore. The win over Pague and his performance against Menjivar sealed his fate forever. But just as he was content with being a local pro years ago, he’s just as happy to know that everyone he fights will be coming with their ‘A’ game in order to topple him.

“They’re gonna have to come at me with a real good gameplan because they see that I’m dangerous on my feet and I’m dangerous on the ground,” said Albert. “So they’ve got to either weather the storm or have a bigger gas tank because I’m a pretty dangerous fighter.”