"At the end of the day, I’m going to be me no matter what, and I only know one way how to fight." - Joey Beltran 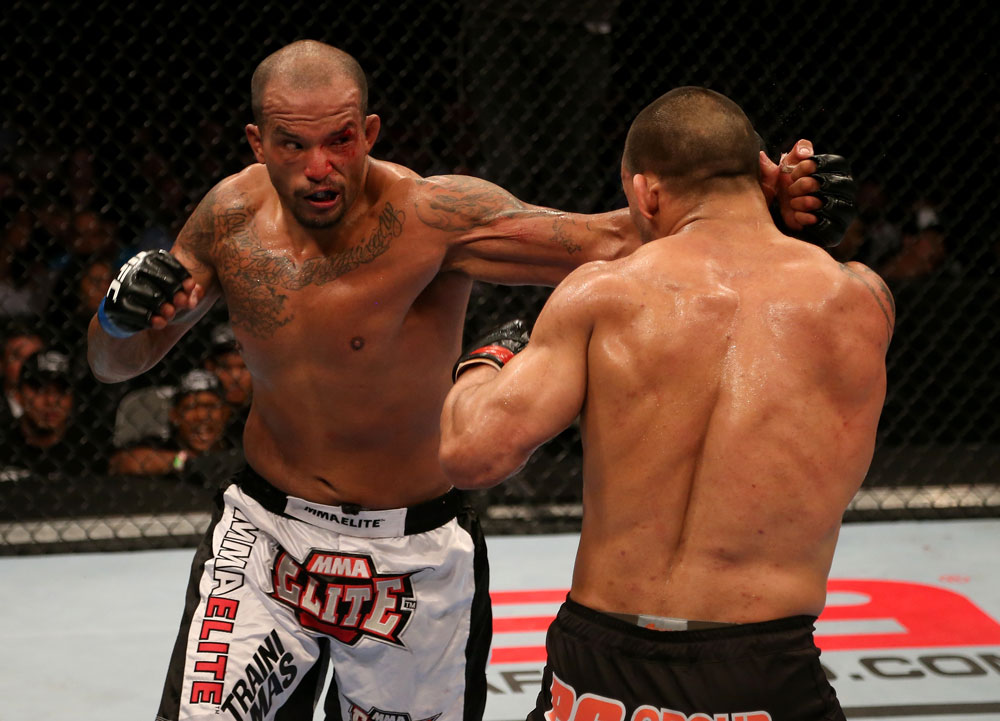 Fans know that when Joey Beltran’s name is on the fight card, they’re going to get at least one knock down, drag out, back-and-forth battle. It shouldn’t be any different when he returns to the Octagon this Friday (Saturday in Australia) – a week after his 31st birthday – to take on Igor Pokrajac as part of the UFC on FX event from Gold Coast in Queensland, Australia.

Originally scheduled to face Aussie MMA pioneer Anthony Perosh on the event that will also serve as the finale for “The Smashes,” a change of plans occurred when Perosh was felled by something that sounded totally harmless, but turned out to be one of the most gnarly injuries of the year.

“I got the text message early in the day, and my first response was, ‘what the hell? You can’t deal with a toe injury?’” laughed Beltran, recalling his reaction to Perosh’s injury withdrawal. But this was no ordinary toe injury.

Perosh broke the big toe on his left foot, a photo of which quickly made its way around the Internet, showing the post-injury digit bent at a 45-degree angle, bone exposed. “Shortly thereafter the picture got leaked, and then it was, “That’s okay. You get a pass.” That was pretty brutal.”

Opponent changes can often produce a letdown, but in Beltran’s case, the shift from Perosh to Pokrajac has him even more excited about making the trip to Australia.

“It’s going to be real fun, and I couldn’t pick a better opponent,” said Beltran, who lost his UFC light heavyweight debut to surging New Zealander James Te Huna back in July. “When I found out that Anthony Perosh got hurt, I texted my manager and said, “Let’s get Igor!” I know that he’s a tough Croatian. It’s going to be a war, it’s something that the fans are going to like, and it’s also somebody that I can work with, and can have some success against.”

After beginning his UFC career with consecutive wins in the heavyweight division, success has eluded Beltran in all but one of his last six trips into the Octagon. Consecutive losses to heavy hitters Stipe Miocic and Lavar Johnson brought his first run with the promotion to an end last January. He contemplated retirement, but instead decided to drop to light heavyweight and continue pursuing his passion. When teammate Brandon Vera was selected to square off with Mauricio “Shogun” Rua, “The Truth” suggested the UFC called Beltran to fill his place opposite James Te Huna.

The duo threw down as the co-main event of July’s UFC on FUEL TV event headlined by Chris Weidman’s win over Mark Munoz, and while Beltran came out on the losing end of the decision yet again, the optimistic light heavyweight competitor sees far more positives than negatives in his performance.

“The thing about me is that I’m realistic and I know myself. I’m a little hard-headed – it takes me a while to learn, and I often have to learn stuff the hard way. In my profession, that can be a little painful, but I feel like I learned a lot from that Te Huna fight. I see that I had decent success in that fight, did some good things, but just made a lot of stupid decisions.

Though his return to the cage produced another entertaining performance, it also produced another loss, and as much as putting forth exciting efforts that fans walk away talking about is important, wins and losses are what ultimately determine how long you remain a part of the UFC roster.

Few people escape extended losing streaks, and there is even less wiggle room for a fighter embarking on their second tour of duty with the company. That leaves Beltran in a precarious position where his fighting style and future employment could potentially be in opposition of each other.

An admitted brawler with a desire to please the fans and send them home talking about his fight whether he wins or loses, Beltran has never once asked for a lesser opponent or turned down a tough fight. While his struggle to find the win column of late certainly turns up the pressure heading into his bout with Pokrajac, a leopard can’t change its spots.

“I’m not going to lie and say there isn’t a little bit of nervousness and a sense of pressure heading into this fight, especially coming off of a loss, but at the end of the day, I’m going to be me no matter what, and I only know one way how to fight.

“That being said, my team and I have been working on a lot of things where I can still produce those entertaining fights, but do it in a more intelligent way that produces more wins and saves my brain. I’m going to keep my same aggressive style, and push the pace, but be a little bit more intelligent about it. At least I hope so. You never know with me. As soon as we get in the cage, the game plan kind of goes out the window when we start scrapping.

“I’ve been really, really working hard on listening to my corner to the point that if they say, `Throw a right hand,’ it’s a right hand right away, so that I can develop a synergy going into the fight. They can be my eyes so that if they say, `Reset Joey, push for the takedown,’ whatever it is they see, then they can navigate me through my craziness. That’s all part of the mental part of the game, and I’m ready for that. I’m excited. This guy is coming for a war, and I’m ready for that. I know it’s going to hurt, but I know it’s going to be fun.”

While fans and critics may question Beltran for continuing to employ the same style that has left him battered, bruised, and bloodied coming out of each of his previous UFC appearances, the man known as “The Mexicutioner” believes his consistent approach in the cage and the resulting savagery that ensues are a big part of the reason the UFC was ready to bring him back in the first place.

“I think the reason why I’m here in this company and the reason why Joe Silva and Dana like me – I think Dana likes me; I don’t know though – is because they know we’re going to deliver,” offered Beltran, cackling at his uncertainty about the UFC President’s personal feelings for him.

“I guarantee now that it’s Igor Pokrajac and myself fighting, you have to think if not Fight of the Night, at the very least it’s going to be crazy and everybody is going to leave at the end of the night talking about it.

“Even the fights that I lose are pretty crazy,” continued Beltran. “Even me getting knocked out that one time was so gnarly because people were like, “Oh my god!” I’m not going to lie – it was bad for obvious reasons, but still, people left talking about that more than anything else that card.

“I look at it like it’s my job, it’s how I make money, how I support my family, and if I’m breathing while I’m in the Octagon, I’m swinging. And Joe Silva knows that about me, so it’s all good. I’ll fight whomever he asks me to fight because I believe in the vision that he has. I just feel that Joe Silva knows what I bring to the table, how I bring it, and he just matches me up with people where we’ll produce exciting fights.