"You’re either cocky or confident in this sport. There’s a fine line between the two, and you’ve got to figure out which one you’re gonna be.” 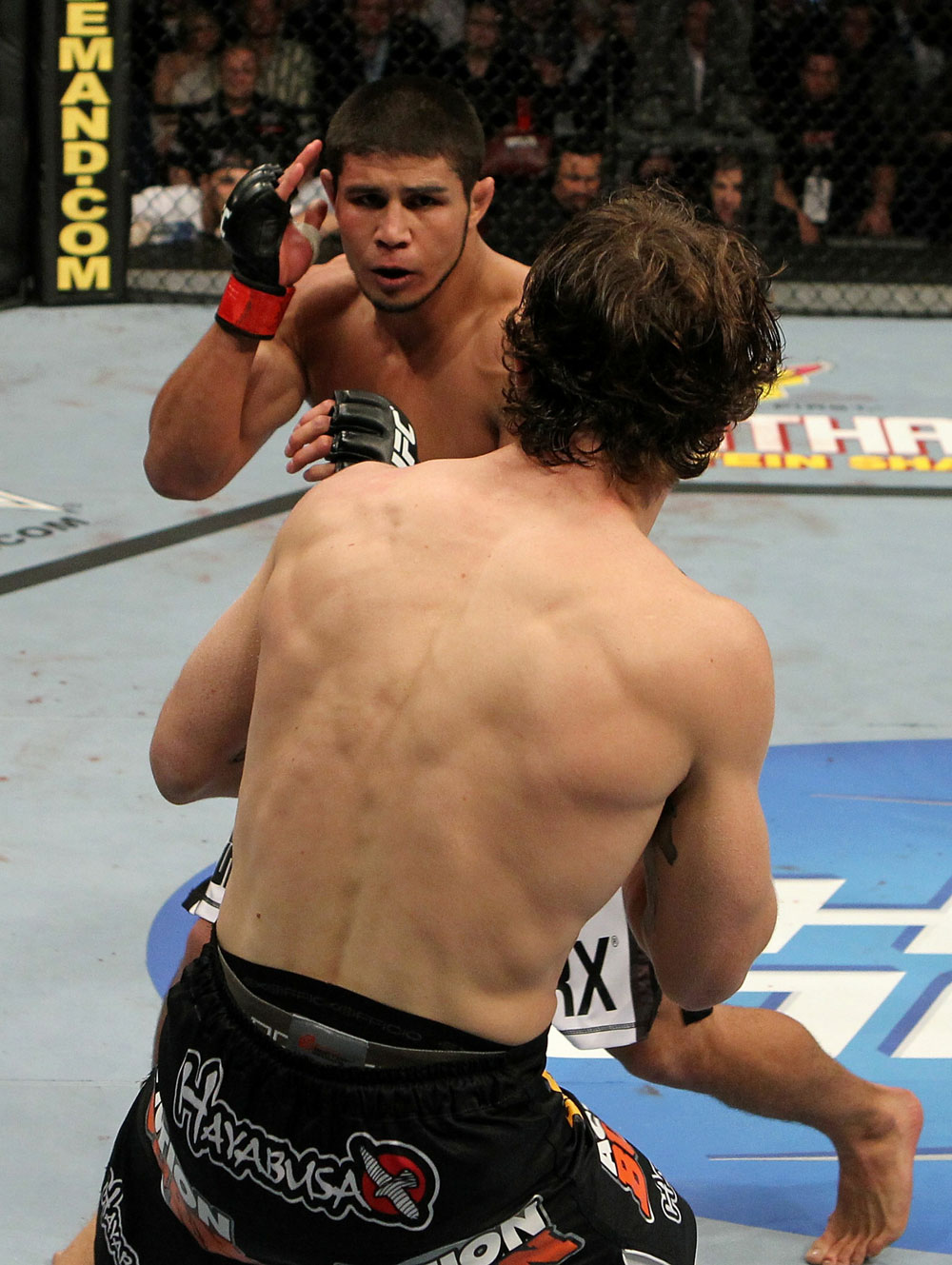 If you’re a parent, you didn’t envy Joe Stevenson in the aftermath of his knockout loss to Mac Danzig at UFC 124 last December. Sure, it’s easy to explain the ins and outs of the fight game to your children when things are going well, but what about when you have to let them know that despite being knocked out, you’re still okay?

“You have to be more of a man,” said Stevenson, father of four boys. “Anyone can win a fight or be a champion with a six fight winning streak. I think it takes ten times the person to stand up after a loss and say ‘all right, back to the drawing board.’ You have to be strong and you have to show that you’re okay, especially when you’re dealing with kids. That, to me, is more important than anything.”

“And let’s be honest,” he smiles. “I think the kids have seen a little worse when they saw me fight BJ (Penn).”

This is true. And whether it’s giving life lessons, explaining his day job, or just having an ear open, the lightweight standout embodies his nickname, “Joe Daddy”, like no other.

“There are parents that only enroll their kids in private schools or home school them and kinda keep them sheltered from everything,” he said. “Whereas we as a family, we don’t really shelter them from too much other than things that they shouldn’t see at all. We let them know what’s on our minds, and they’re always free to talk to us, no matter what. There are no bad questions, especially with your kids.”

That end of things covered, Stevenson still had to deal with the own questions in his mind after his second loss in a row, and his first knockout defeat since Jens Pulver did the deed in June of 1999, when the Californian was just 16 years old.

“It was more emotionally disturbing,” said Stevenson of the Danzig fight, which saw him taken out by a left hook at the 1:54 mark of the opening round. “I had never been knocked out before. I had fought Jens when I was 16 and he broke my orbital. I wasn’t knocked out – I was in a lot of pain. But it’s definitely the punch you don’t see coming and the one you least expect. I was not even thinking that he would swing on me. I was thinking ‘I rocked him, here it goes.’ And that’s what I get for being greedy and trying to get the finish early when I didn’t stick to my gameplan. You watch the tape and you can hear (trainer) Greg (Jackson) go ‘stick to the gameplan Joe.’ And I take full responsibility for that. But I got a lot of questions out of my head. I kinda wondered what it would feel like to get knocked out, and it doesn’t really feel like anything.”

Stevenson, in keeping with his personality, chooses to see the light instead of the dark. And that’s not surprising, considering that the physical aftermath of a clean knockout loss is in most cases less taxing than the days after a grueling three round war. Of course, the flip side of that is that it looks worse to have a KO defeat on your record than a decision loss. Stevenson is not on the fence when it comes to his preference though.

“I would rather be knocked out or finished in a submission than lose a unanimous decision,” he said. “With a unanimous decision, there’s something I could have done different. I feel at the top level, everyone can beat everyone, given the right day. Stylistically some matchups would be harder than others, but losing a decision, to me, unless it’s Fight of the Night, everyone loses out because there’s no definite answer.”

What is not open to debate is that with two consecutive losses and defeats in four of his last six, Stevenson has his back against the wall when he faces WEC import Danny Castillo this Thursday in Louisville.

“He’s a wild card and he’s dangerous,” said Stevenson of Castillo, who brings a two fight winning streak into the bout. “He wouldn’t have taken the fight if he didn’t think he could win. So I know that he’s not taking it lightly. He hits hard, he is a great wrestler, he’s got good top control, and his submission defense is very admirable. I think for him coming into the UFC, it might be a little more nerve-racking, but the more and more I think about it, there wasn’t much separating the two divisions other than a deeper talent pool than the WEC fighters. And the top WEC fighters were just as good and very dangerous.”

But even though Stevenson knows that he’s in for a tough fight, he may be the real wild card, as he’s calm and prepared for what may be the most pivotal bout of his career.

“I’m coming off two losses and I’m not going into this fight super nervous,” he said matter-of-factly. “I’ve been to the two loss point and back and I know how it feels and I know what to expect. I feel really comfortable, but yet I have a definite sense of urgency with this kid being as tough as he is. It’s gonna be awesome.”

This time around, the 28-year old Stevenson has even added some new wrinkles to his game, as he’s stayed at home in California for the majority of his camp. He still spent some time in Albuquerque with the Jackson’s MMA team and will have Greg Jackson in his corner this week, but also in the corner will be longtime friend and respected boxing trainer Henry Ramirez, who currently guides the careers of world-class heavyweight contender Chris Arreola and rising star Josesito Lopez.

“He (Ramirez) is a great friend of mine and a coach when I’m at home,” said Stevenson, who has been working in Riverside with Ramirez and also at home in Victorville. “He’s one of the smartest coaches that I’ve ever had the pleasure of working with.”

And conditioning wise, he still gets a taste of that Albuquerque altitude.

“I have a little bit of altitude where I live here in Victorville,” he said. “And then getting to train at a lower altitude, almost at sea level in Riverside, allows me to actually perform harder there, come back and recover at a higher altitude here. I really like that scenario.”

Yet for all the physical work and the sharpening of techniques, you get the feeling that at this point, after nearly 12 years in the pro game, Stevenson’s greatest weapon is his ability to dig deep and call on that experience to win a dog fight. Castillo, though talented, hasn’t been where Stevenson has in the MMA world, and when you discuss this with the former world title challenger, he reluctantly agrees, then qualifies his response.

“I think it puts me at a bit of an advantage,” he said. “But the guy that says ‘oh, he’s never been there,’ that’s like the golden word to say I’m gonna lose this fight. “I’ve fought people he’s never fought”, “I’ve done things he’s never done”, “he’s never fought anybody like me.” When I read that or see that, I’m like ‘uh oh, wait a minute,’ and that’s a dangerous avenue to take. You’re either cocky or confident in this sport. There’s a fine line between the two, and you’ve got to figure out which one you’re gonna be.”

That statement should tell you where Stevenson stands on that topic, and he doesn’t mince words when it comes to a 2010 campaign that he would probably like to forget.

“2010 was definitely a year that I needed to take a lot from as far as what I did, veering from gameplans, letting the crowd take control of me like in Australia and things like that, and learn from those experiences,” he said. “I’m gonna learn from my mistakes and not allow that to ever take place.”

So what does that mean for him in 2011? He’s going to take a page from the book of his buddy Arreola for that answer.