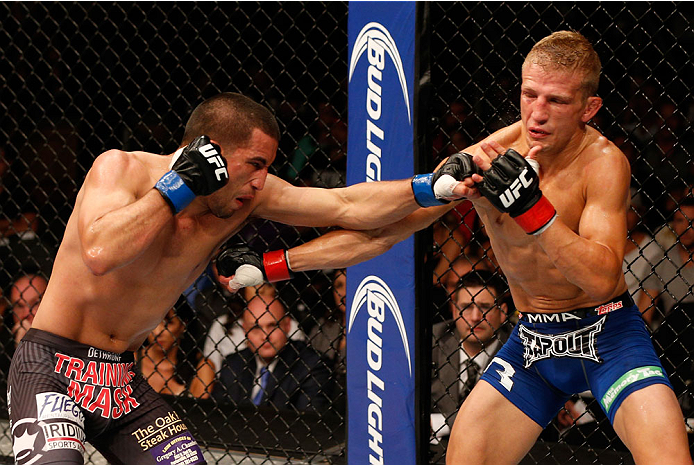 As far as UFC debuts go, Joe Soto might have the most unique story out there.

Fresh off an early August win on the regional circuit that pushed his winning streak to six, the 28-year-old California native inked a contract to share the cage with fellow newcomer Anthony Birchak at UFC 177 at the end of the month. After years of effort trying to make his way to the sport’s biggest stage, the three-week turnaround was an opportunity to finally step into the UFC Octagon and a chance to cross a long-term career goal off the old bucket list for Soto.

“I just didn’t want to die and have never made it to the UFC,” Soto, who compiled a 15-2 record prior to making his UFC debut last summer, admits. “I didn’t want to be a failure. I did all this stuff and I know I’m better than a lot of those guys in the UFC and to never make it there, I didn’t want to live my life with regret or have that sad story following me around.”

The day before he was supposed to square off with Birchak, the story of Soto’s inaugural UFC appearance took a sharp, unexpected turn.

Former bantamweight champion Renan Barao fell ill while trying to cut weight and was forced from his main event rematch with TJ Dillashaw. Just over 24 hours before the UFC 177 Pay-Per-View was set to begin, the main event was short one fighter and the organization turned to Soto to fill the void.

“That’s the craziest story of my life and I’ve had a lot of crazy s**t happen in my life,” Soto says of his fight with Dillashaw. “It was weird, but I was ready for it. I prepared myself for that moment – those worst-case scenario moments like, ‘Hey, you’re fighting the best guy in the world tomorrow in his own backyard.’

“I had trained with Dillashaw and the whole Alpha Male team before, so it’s not like I didn’t know I could compete with him. The biggest thing is, ‘Ah s**t, this is happening quick’ and not being able to prepare mentally for it. Usually you have two months to prepare for it if you’re going to fight the best in the world, but I had one night. That was tough, but being a good martial artist and dedicated to my craft, technically I was ready and didn’t feel inferior; it was more that I didn’t have time to get mentally ready for it, but it was a crazy experience.”

The following night, Soto was the penultimate fighter to make the walk to the Octagon inside the Sleep Train Arena in Sacramento and, given the circumstances, he acquitted himself quite well, going a hard-fought 20 minutes with the bantamweight champion before Dillashaw was finally able to finish him midway through the final round.

Even though he came away on the wrong side of the results, everything else about the fight was a positive for Soto, who showed far more in a losing effort against Dillashaw than fans otherwise would have gotten to see in a three-round preliminary card tussle with Birchak.

“Right when they said, ‘Do you want to fight the champ?’ I knew it was definitely going to be a win-win situation,” the 28-year-old bantamweight says. “Because I was able to do so well, even in defeat, I probably gained more recognition, more fans than if I were to go out and beat Anthony Birchak that night. I got more from that loss than if I had won my debut on the prelims, so I gained a lot.

“It’s the experience too because I’m pretty much ready for anything now, you know?” he adds. “Main event and fighting the champion in his own backyard is good experience. Fighting the best in the world, seeing the speed, seeing the technique and being able to deal with that for a few a rounds, I’m good for whatever now.”

Saturday night in New Orleans, Soto will step into the Octagon for the second time, once again matched up opposite Birchak, who dropped his promotional debut against Ian Entwistle back in December.

In the 10 months since his unexpected championship debut, Soto put in hours in the gym, working on the technical side that often falls by the wayside when competitors jump straight back into training camp after a fight. He also spent time with his family, caught up on sleep and allowed himself to finally relax after a couple years of working towards reaching the UFC, all of which he says will allow him to perform at his best this weekend.

“It was good to relax and sit back, take a breath,” Soto says of his break between fights. “I felt like I was grinding so hard for a few years to get into the UFC, real stressed not knowing whether you’re going to make it to the UFC or not. It was constantly on my mind – I couldn’t sleep, couldn’t rest until I got in.

“When you’re trying to get into the UFC, you’re stressed out in the cage and can’t perform freely because you don’t want to lose because then you might not make it, so you’re holding back sometimes,” he continues. “Then I finally got in, fought TJ and I was able to rest after that. I finally made it to the UFC and now I can breathe a little bit.

“Now that I’m here, it’s like whatever. Nobody in my neighborhood, nobody in my town ever did anything like this before. I’m already a winner, so let’s just go out, compete and have fun. My dream was to step foot in that cage and I did that, so now I can have fun.”

Having crossed a few career goals off his personal list in his debut, Soto is ready to start working towards accomplishing a few others beginning with what he promises will be an exciting performance against Birchak at this weekend’s UFC Fight Night event in New Orleans.

“Obviously to be No. 1 and kick Dillashaw’s ass – knock him out, tap him out, whatever; just prove I’m better than him (is still a big goal), but even before that it’s just go out and make money for my family, provide for them. Get a house. Get some financial security for my family; that’s the big thing. Yeah I want to win the belt, but I want to take care of us.

“As for this weekend, fans can expect the best me out there – healthy, in great shape. They can expect me to bring it. As long as I’m conscious, I’m going to be trying to finish the fight and bringing an exciting style.”