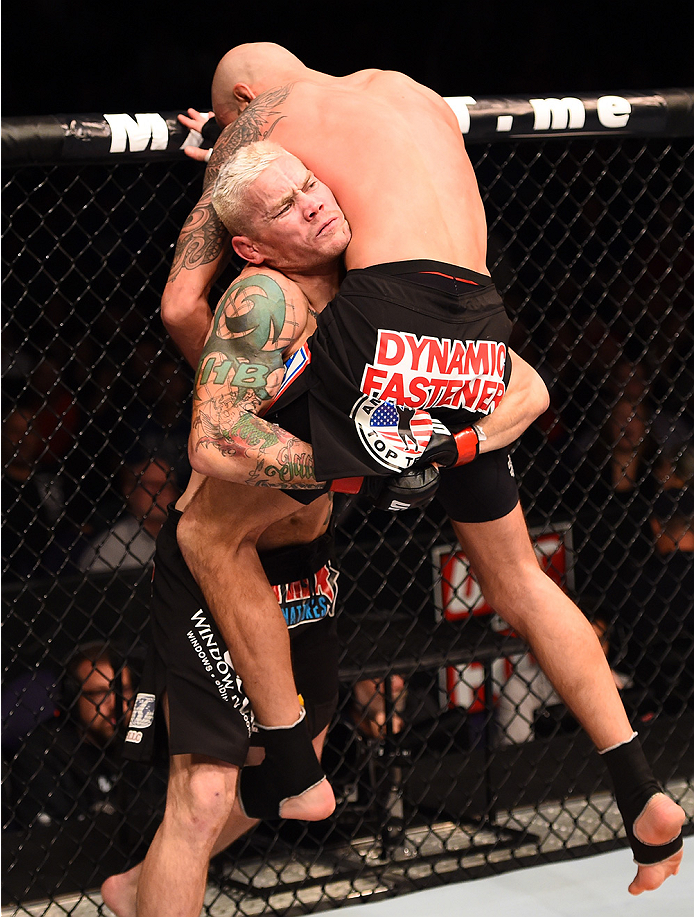 That night was celebrated as his return to the Octagon for the first time since 2006, but a freak neck injury ended his bout against Ben Saunders almost as soon as it started. It wasn’t exactly what “Diesel” expected; not even close.

“I don’t consider that last one actually a fight,” Riggs said. “I felt really good going into it and I felt like I was going to dominate the fight. Any fighter knows that you can pretty much feel how the fight’s going to go right when you first match up with a guy. I felt it was going to be my night, but for some reason things happen the way they do and it didn’t end the way I wanted it to.”

When you’ve been around the sport as Riggs has, wins are always the goal, but if you do lose, you want to at least know that you gave your best and went down swinging. He didn’t get that feeling against Saunders, but when he steps into the Octagon Saturday against Patrick Cote, he’s confident that things will be different.

“I look at this one and I don’t care how it ends, I just don’t want it to be anticlimactic,” he said. “I just want to have a great fight.”

Riggs has earned that. A pro since 2001, the Arizona native is as old school as they come, and during his eight-fight UFC stint from 2004 to 2006, he became a fan favorite for his free-swinging style and willingness to fight the likes of Matt Hughes, Mike Swick, Nick Diaz and Chris Lytle. But after his 2006 loss to Diego Sanchez, he felt like he needed a break from the Octagon.

“I actually asked (UFC matchmaker) Joe Silva for my release in 2006 and it was a stupid move (Laughs), but he granted me that wish,” Riggs said.

He didn’t stop fighting, winning some losing some, but always on the verge of a return to the big show if not for the pesky detail that he was usually under contract to other promotions.

“I won a belt when I was over in Strikeforce, and every time when Joe Silva would have me back, I was under contract,” he said, but after moving to the MMA Lab gym in Glendale, he put together a six-fight winning streak and was freed from his deal, setting the stage for his return.

“It was a perfect storm. I was one of the lucky ones to get my release from Bellator after I won Fight Master and Joe signed me. It feels really good because I’ve been working towards this for the last four years.”

Of course the neck injury against Saunders was bad enough, but before that there was the issue of Riggs accidentally shooting himself while clearing his gun, making it seem like his UFC return was ill-fated from the start. But Riggs is nothing if not a survivor, and he has battled his way back, like he has throughout his career and life.

“In this sport, the highs are so high and the lows are so low that it takes a certain kind of person to be able to go through the ups and downs and keep pushing forward,” he said. “I consider myself like a dung beetle; I just keep taking s**t and go forward. This line of work is not for the weak-minded people, so it feels great to weather a lot of the storms that I’ve had in life and in this career and be able to be here when I’m still able to compete at a high level in my prime and give my final push in this career until I’m done.”

He may very well be in his physical prime at 32, an amazing number considering how long he’s been fighting, but what may be the secret to his resurgence has nothing to do with anything physical.

“I was just raw talent,” Riggs said of his first UFC run. “I’m so much more of a better fighter than I was back then, especially mentally. I’m just on a different level. When I was younger I couldn’t really see myself going in a three-round war. Not that I was afraid to, I just had a lot of performance anxiety as a kid. Going through a lot of the adversity that I’ve been through has really prepared me to go through anything. If the worst thing that happens in your life is you lose a fight, that ain’t s**t. You get in there and you fight as hard as you can and let the cards fall where they may, and you can hold your head high. I know I’m good enough to beat anybody in the world on any given day, and if I go in there and fight to the best of my ability, nothing but good can happen.”