Joe Proctor - Not Paid for Overtime 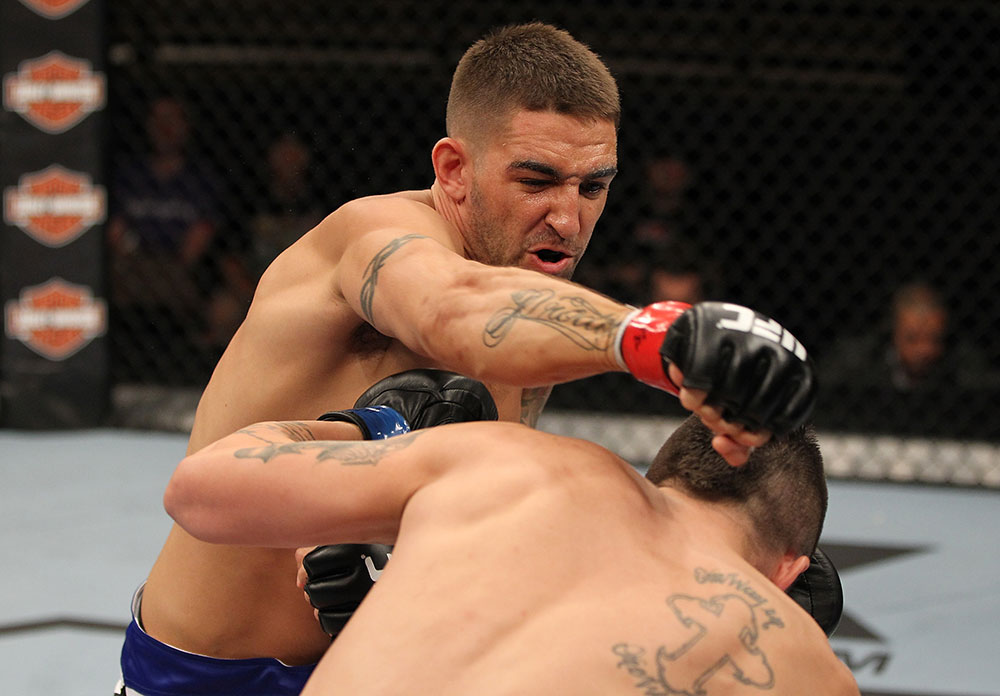 “Life moves pretty fast. If you don't stop and look around once in a while, you could miss it.” - Ferris Bueller

In the span of a year, a self-professed gym rat making ends meet as a carpenter in Pembroke, Massachusetts went from being a weekend warrior to a UFC fighter. One can add a reality star to boot. Following a 5-1 amateur record and a 7-1 pro record heavily featured on the New England circuit, lightweight Joe Proctor successfully tried out for The Ultimate Fighter Live after solidifying himself as a burgeoning prospect on UFC fan favorite Joe Lauzon’s Team Aggression. Time sped up from there as Proctor traveled from near obscurity to a highlight reel Octagon debut and, now, to the cusp of an anticipated second UFC fight.

“2012 has been fast paced,” discloses Proctor. “Honestly, the last thing I expected was to be in the UFC and be in the position that I am now. I had some good local fights and I always dreamed of being in the UFC, but I never thought it was this close to being in my grasp. It was so quick. I fought Matt Bessette for the Reality Fighting title at Mohegan Sun in Connecticut and the next thing I know I'm trying out for The Ultimate Fighter and the next thing I know is I'm fighting to get in the house. It was crazy. It was a whirlwind and it happened so fast.”

At 27 years old, Proctor was 1 of 32 fighters used to try out a new live format for TUF as the competition based-show moved to the FX network. Originally, a six week pre-taped and edited process would be changed to 13 weeks of live fights as well as an innovative one round only scrap to get into the house. It took Proctor only moments to latch-on a guillotine choke to secure his spot on the show. Inside the house, Proctor went 1-1 by tapping Chris Tickle with a rear naked choke and dropping a unanimous decision to James Vick. With his time left on the show, Proctor trained and looked forward to an eventual showdown at the finale.

“Being on the show, it was actually really easy to be focused,” says Proctor. “All there was was to focus on training and to be ready for that finale fight. Soon as I got out of the house, it was crazy being in reality again. I stayed focused and I got to see my coaches again for the first time in three months. Soon as I got with them, we started clicking again. I felt good. I felt like I had my team around me again. I just went out to that fight to have fun. I think it showed in the fight that I had fun and the outcome was great.”

After three months in isolation and a quick phone call to his girlfriend and little brother, Proctor was back in the good graces of his coaches - current lightweight contender Lauzon and boxing coach Steve Maze - and training for his UFC debut. At the TUF Live Finale on June 1st, Proctor was scheduled to take on heavy-handed housemate Jeremy Larsen. A quick trip and even quicker fight to get onto the show, a disorienting 13 weeks in the house, and only a week of actual preparation for one’s first UFC appearance could easily throw anyone off their game, but a few words of advice from Proctor’s trusted support staff kept him living in the moment before that triumphant victory.

“Even as it started, right before I walked out, I remember Joe Lauzon and Steve Maze saying this could be one of many walkouts out there or it could be your last, so have fun out there,” reveals Proctor. “And I immediately switched it. I was like let's go have fun out there like I always do. I went in there and Larsen came in strong like he wanted it. He was leaving his head wide open while going low to the body. After a couple of shots he was taking, I saw that opening and I threw that Thai clinch knee and caught him good.”

As expected, a scintillating, lightning quick finish at 1:49 of the first round resulted from the protégé of the king of Fight Night bonuses, Lauzon. No one needs to tell Proctor because he’ll be the first to tell someone how helpful “J-Lau” has been as a coach, a friend, a cornerman, and as a veteran of the TUF house on season 5. While the formats were different and the time in the house was more than double, Proctor had a good understanding of what he was getting into with the show, as well as outside of it, trying to maintain a roster spot in the UFC because of Lauzon. Comparing and contrasting their different experiences in the house, Proctor believes the 13 week endurance of TUF was more beneficial for the fighters than the wham, bam, thank you ma’am approach of the original.

“I think with the 13 weeks it was a lot easier to form a unit because we were going to be there for so long,” states Proctor. “We had to build a close-knit family. From Joe's experience, they were always just trying to not get hurt in the camp because they always had a fight coming up on a few days notice. We knew a week ahead of time, which was good because we could plan our camps accordingly and our weight cuts accordingly. I actually liked that format. I'm quite glad we got the 13 weeks that we did.”

On the heels of his first TKO win improving his record to 8-1, Proctor is ready to take to the cage on December 8th at UFC on FOX against another TUF alum, Ramsey Nijem. At 24 years old, the Californian who trains at the PIT Elevated in Orem, Utah is 2-1 inside the Octagon following his TUF finalist berth in June 2011. Nijem’s back-to-back wins over Danny Downes and, most recently, C.J. Keith have been a return to form for the decorated wrestler who finished all three of his opponents inside the house on TUF 13. It’s an East Coast vs. West Coast matchup of young, well-rounded TUFers looking to steal a piece of the 155-pound division for their own.

“The opponents get tougher as you win and I expect a great fight out of Ramsey,” asserts Proctor. “When I first got the call, I was excited. Ramsey has a good name for himself. He was an Ultimate Fighter finalist on season 13 and he's got a couple good wins so far. He has a great following, so a good win over him would skyrocket me in the lightweight division, I think. I would describe him as aggressive. He's not overly technical in any aspect, but he's a grinder. He never quits. He's hard to finish. He keeps coming. I like those types of fights. He's going to push me. I like when I know it's going to be a war. It could be either Fight of the Night or Submission or Knockout of the Night. I know my hand is going to get raised in the end.”

In the lead-up to this bout, Proctor has been breaking in some new digs in Easton, Mass as Lauzon MMA opened their new gym, which was previously in neighboring Bridgewater. Team Aggression had been working overtime getting middleweight Tom Lawlor ready for his UFC 154 fight, getting Proctor ready for Nijem, and, at the end of the month, team leader Lauzon will be taking on another top talent in Jim Miller at UFC 155. Obviously, the intensity is high in the gym with all these fights one right after another to add to Proctor’s training, as well as additional high level coaches who are brought in like grappling guru to the UFC stars, Ricky Lundell.

“A good thing about having Joe's fight only a few weeks after mine is that I kind of get to ride the tail end and get to have the great coaches that he has, like Steve Maze as his boxing coach and Ricky Lundell,” explains Proctor. “Ricky has some good stuff. I've been picking his brain about a lot of things and he's been helping out a lot for this fight. Between him and Joe this camp has been awesome. I've been training with Joe a lot for this fight. Just having Joe in my corner is a huge advantage. This camp has been phenomenal and my strength & conditioning has been skyrocketing. I've been sparring a lot and doing great.”

Each gym has a particular culture and style, and one could easily assume that a camp led by six-time Submission of the Night winner Lauzon would be ground oriented. One would not be wrong, but Lauzon carries a Knockout of the Night and four Fight of the Night honors as well, which means he pushes the fight everywhere, and with that, so do the fighters of Team Aggression. For Proctor, the TKO of Larsen was only a foreshadowing of what’s to come from the young lightweight in the striking department.

“I think I'm a very well rounded fighter,” affirms Proctor. “I train a lot of every aspect. A lot of boxing, a lot of kickboxing, a lot of jiu-jitsu, but for the most part I think on the show people didn't really get to see my hands. It's a shame too because my hands have gotten very good working with Steve Maze. He's an unbelievable boxing coach and I couldn't ask for anyone better to be in my corner. I'm hoping in this Ramsey fight I can definitely showcase my hands. That's how I plan on winning. But if it goes to the ground and I end up submitting him, then that's another thing. I showed my jiu-jitsu and I showed a little bit of Thai with that nice knee and I showed some nice takedowns and stuff, but for the most part my hands haven't been showcased yet, and I can't wait to show them.”

On December 8th, two young gun, TUF alums will collide when Proctor squares off against Nijem. “I'm going in there for the finish,” says Proctor, who has learned from one of the best fight finishers the UFC has ever seen and proved it by making short work of his opponent in his debut. “I'm not going in there to fight for all three rounds. Like the motto says, you don't get paid by the round. I'm going in there to take his head off and I know he's going in there to do the same.”

While these past months have rushed by in a blur, Proctor is making the hours count in the gym, so it only takes him minutes and seconds to win in the cage.