Joe Proctor: It's All About Experience 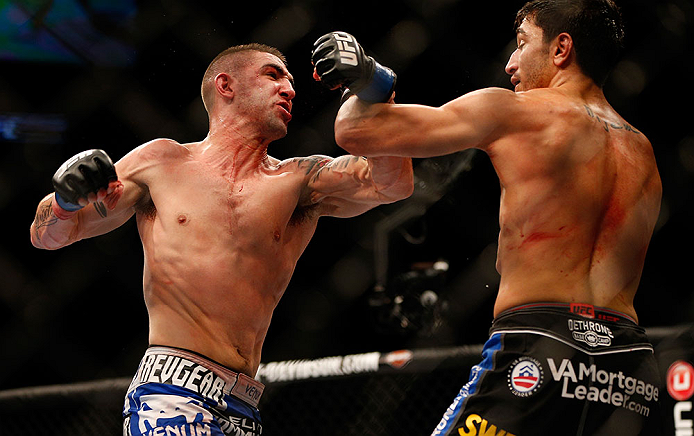 So much of a fighter’s life exists beyond the time spent inside the Octagon. While the rinse, wash and repeated rigors of training camp is an all-consuming process, there are added benefits beyond victory fought for and achieved when things go live on fight night. For Massachusetts native Joe Proctor, the most prevalent perks of his career path are the experiences that come with a life spent traveling to new places to test his will in the same way he always has.

The Ultimate Fighter 15 alum is entering his third year under the UFC banner, and his ability to sling leather at the highest level of the sport has already taken him far beyond the borders of the Commonwealth he grew up in. And while his progression as a mixed martial artist is always the primary objective, the 29-year-old Team Aggression representative has never allowed the grind of his profession to keep him from taking in the sights and scenery of each new place he finds himself in.

“I look at my career the same way I look at life in general,” Proctor explained. “You really have to take time to stop and smell the roses. You have to experience and accept everything for what it is. Yeah, you have to focus on the fight, but you also have to take the full opportunity to experience everything you can. I’m fighting for the biggest promotion in my sport, and it’s one of the fastest growing sports in the world. I get to fight in front of all these people and it’s amazing. But it really is the little things.

“I’ve never been to New Orleans but now the UFC is bringing me down there to fight, and afterwards I’ll get to experience something I never have before. I get to enjoy all of these things and that’s why I love what I do.”

The next stop on his journey will come this Saturday night when he faces Justin Edwards at UFC Fight Night: Henderson vs. Boetsch in New Orleans, Louisiana. And while the lead up to his tilt with “Fast Eddy” will require discipline that will keep him away from the world renowned cuisine and lively spirit of The French Quarter, he’s going to make sure his return to his home state will only come after he’s given the finer points of NOLA his full attention.

“I always try to stay out there a couple of days after my fight just to go out there and experience the places I go. There are a lot of things in New Orleans I want to see and a bunch of great food I’m really looking forward to trying.

“I’ve never been down there, but I have read so much about the food and culture. I also have a lot of friends who have been there and they all tell me how great the food is. I won’t be able to do much during fight week, but once my fight is over you better believe I’m trying some gumbo and crawfish. I’ve heard it’s unbelievable. I know it’s going to be tough from Tuesday to Saturday, but after that I’m going to indulge and be a happy camper.”

In addition to the added perks of his trip to “the bayou,” Proctor will also be looking to get things back on track inside the Octagon. The Joe Lauzon protégé was riding a two-fight winning streak coming into his most recent tilt until Yancy Meideros halted that progress via submission back in December. That said, after surviving one of the worst winters in the history of the East Coast, where he spent countless hours prepping to make good in his return, Proctor has emerged a different kind of animal.

He’s ready to put his improvements on display this Saturday night, and believes he’s going to stamp an impressive performance at Edwards’ expense.

“I always seem to come back really strong any time I have a loss,” Proctor said. “It’s unfortunate what happened last time out, but it put a little motivation under my butt. I went right back to the gym and started working on new things and sharpening the things I’m already strong in. I’ve been working very hard to make sure I’m prepared for this next fight.

“Oh man, the winter out in Boston was terrible,” he added. “It was crazy, but sometimes stuff like that makes you more motivated to get into the gym and train. You have to shovel yourself out of 30 inches of snow and make the drive, but that gets you into a different mindset when you get there. It’s the fight before the fight in a sense.”

When Proctor talks about making strides in his professional career, he’s talking all things big and small that go into his personal evolution as a fighter. He knows a versatile skill set is required to have longevity at the highest level of the sport, and he’s worked diligently to ensure he’s more than capable anywhere the battle inside the Octagon may take place.

He does this because simply passing the grade isn’t enough. Proctor wants to be a fighter fans love to watch, and he’s been on a mission to become that fighter ever since he entered the UFC fold back in 2012. Furthermore, Proctor is confident the work he’s invested is moving things in the right direction in that regard, and he’s excited to showcase those weapons on Saturday night in New Orleans.

“Honestly I think everything since coming off The Ultimate Fighter has been all progression,” Proctor said. “Being on Urijah Faber’s team on the show really opened my mind up to a different type of fighting. I came back home from that and have just been building on it ever since. I’ve been moving around a lot and working with Joe Lauzon and the rest of my coaches to really build up my skills. I’ve just been working and working on getting better and I think my evolution has shown. I was on a tear there for a little bit, and I’m going to start a new tear with this fight and put some wins together.

“Everybody in the UFC is a dangerous fighter, and Justin Edwards is certainly one of them. He fought a weight class up so he may be a little bit bigger and stronger, but my game has evolved so much, and I’m going to be ready for anything. I’m going to put everything together and get the win. I just feel he hasn’t fought anyone like me before. I’m going to put tons of combinations together, and my wrestling and jiu-jitsu are strong. My stand-up is great and I’m going to put it on him fast and quick.”