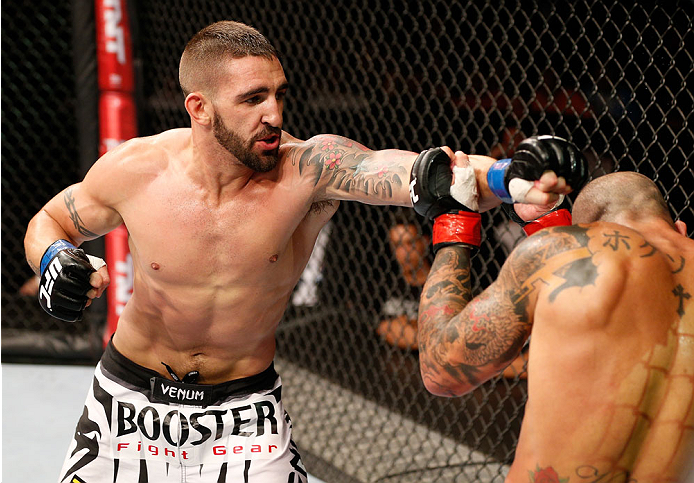 With a 3-1 record in the UFC that includes two knockouts and two consecutive wins, Joe Proctor has established himself as a prospect to watch in the crowded lightweight division. But it wasn’t that long ago that he was like the 15 fighters who will be competing for their future tonight after a stint on The Ultimate Fighter, and as he returns to The Palms in Las Vegas - the place where he made his debut - for his own bout against Yancy Medeiros, he has fond memories of June 1, 2012.

“It is a rollercoaster of emotions,” season 15’s Proctor said. “You're out there for the week and you're doing the press and all that stuff, and you're basically living the dream. But then you realize, all right, I have to fight, and if I don't win I'm going back to working or working my way back up.”

Winner of seven of his eight pro bouts at the time, Proctor won two of three fights on the only live season of TUF, defeating Jordan Rinaldi and Chris Tickle before getting eliminated in the quarterfinals by James Vick. On the season finale card, he was going to face castmate Jeremy Larsen, but before he walked out to the Octagon, his friend and coach Joe Lauzon, who had been in that position before as a member of the TUF season five cast, gave him some sage advice.

“This could be your first walkout of many or it could be your last,” Lauzon said. “So have fun with it and just go out there and do your thing and leave everything out there.”

Proctor listened to those words, which he calls “the best advice I ever had,” and stopped Larsen in less than two minutes. He would lose his second Octagon bout to Ramsey Nijem via decision, but after an injury-plagued 2013, he won both of his fights in 2014, decisioning Cristiano Marcello in February and halting Justin Salas in July.

The wins put him in good stead as he approaches tonight’s bout with Medeiros, but before looking at this 155-pound matchup, it’s important to revisit Proctor’s last bout with Salas, one made memorable by the huge lump raised on his head by the veteran in the first round. It was like Proctor was growing another head, and while the Quincy, Massachusetts native knew something was happening, he wasn’t aware that the next day his face would plastered on memes around the internet.

“I didn't know how big it was,” he laughs. “It basically felt like when you smash your head off a counter or something and you get that lump.”

It drew oohs and aahs from the crowd in attendance, and when the Octagonside physician came in after the round to check him out, Proctor had a feeling something had gone awry.

“I asked Joe (Lauzon) how everything was, because the doctors ran in there,” he recalled. “I thought that maybe I had a cut and I asked him, ‘is everything all right?’ He looked at me with a weird look and was like 'yeah, yeah, everything's good.' (Laughs) That doesn't sound very confident.”

Cleared by the doctor to continue, Proctor soon got a look at what he was dealing with.

“Coming into the second round, I looked up at the screen and I was like 'what the hell is that thing growing out of the side of my head?'”

It was then that Proctor decided that he needed to finish this fight sooner rather than later.

“I wasn't sure when they would stop it, but I knew that they were in there after the first round, so I felt that urgency,” he said. “But I also felt that I was losing the fight anyway. He was catching me with some good shots and I was catching him with some, but I still felt like the first round was either close or he won it. Any round that I see as close, I give it to the other guy as a thing in the back of my head that I've got to push a little bit harder. And that's what I did and I finished the fight.”

At 3:27 of the second stanza, Proctor had his third UFC victory and tenth overall. Two days later, the lump on his head went down, and it was business as usual. Now all he has to concern himself with is Hawaii’s Medeiros and ending the year with another victory.

“Yancy is definitely a tough competitor, but I think every fight in the UFC is tough,” Proctor said. “Just like Cristiano and Justin Salas, they were both tough guys and good at certain things, and that's why we train for the eight to ten weeks. We work on what his strengths are, we delete those, and we put our game plan into action. I think it's going to be a good fight, but as in all the fights, I think I'm gonna come out on top. I want to keep 2014 rolling with three wins this year. I said it when I fought Cristiano: 2014 is gonna be my breakout year, and I just want everyone to understand that. I'm not going anywhere. I might fly under the radar a lot of times because I don't talk trash, but I'll do all the talking when we get in the cage.”

That blue collar attitude is reflected in Proctor’s fighting and his life outside the Octagon, as he keeps a gig at a local correctional facility while he fights in order to keep his competitive career something to look forward to, and not just a job. And while some of his peers on TUF 15 like Myles Jury, Al Iaquinta, Michael Chiesa and Daron Cruickshank have gotten more press, the 29-year-old New Englander is content in knowing that his time is coming.

“If I keep winning, eventually people will have to notice me,” Proctor said. “Justin Salas was a good competitor, and he was supposed to go in there and pretty much handle me and win easily, but I switched up that game plan on him and I ended up TKOing him in the second. And if I keep putting good performances up, I feel like it's going to be my time and I'm gonna start fighting top ten guys like I want to.”