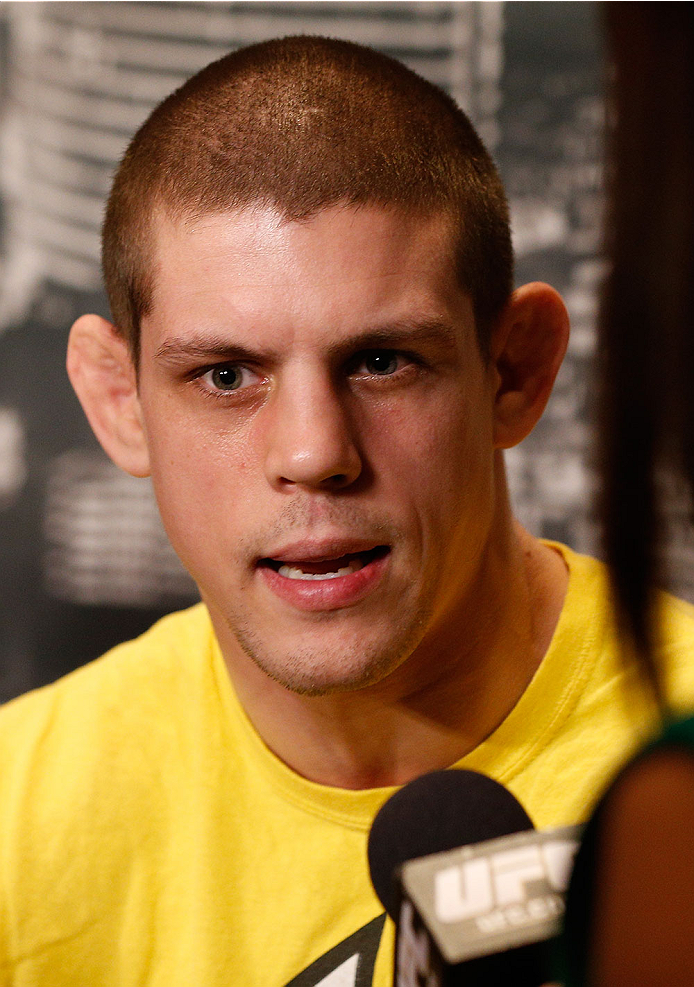 Joe Lauzon does not have a picture of Anthony Pettis on his mirror. There is no call for revenge against the UFC lightweight champion, no daily talks to himself about a quest for the title and a rematch with the man who defeated him nearly three years ago.

Joe Lauzon is concerned with today, and only today. The rest will figure itself out.

That attitude is a byproduct of a 2014 that the 30-year-old New Englander will describe with a chuckle as “Pretty s**tty.” That’s not a surprising assessment given all that he and his family went through, most notably a cancer scare with his newborn son Joey. All of a sudden, someone used to being in control and being a problem solver had to let someone else take control.

“I’m a go-getter,” Lauzon said. “If something needs to be fixed, I want to tackle it and I want to fix whatever needs fixing. With him, there was nothing I could do but sit back and let the doctors do their work.”

Thankfully, the youngest fighter in the Lauzon family won his lone fight in 2014, beating cancer by knockout. His dad didn’t do too bad either, defeating Michael Chiesa in September to earn his second consecutive win and the lone spot at the top of the UFC post-fight bonus list. He was so amped up about his son’s return to health and his own return to the Octagon that he agreed to step up on short notice to face Diego Sanchez at UFC 180 in November. The consensus on Lauzon-Sanchez? It was going to be Armageddon in Short Pants, and fans responded with videos, memes and graphics celebrating the fight.

“I love seeing the fan interaction stuff, like people making short videos and animations and posters; it was all super cool,” he said. “But I was a little worried for my safety and Diego’s safety going in there, because if you go just by the posters, we were going to have an assortment of axes to fight with and so many people were just expecting this crazy bloodbath. (Laughs) So I was glad that people wanted to see it, but I’m like ‘what do you think is going to happen? What kind of fight do you want to see us have?’”

Well, when you match up two of this era’s premier action heroes, a blood and guts throwdown is expected to ensue. Unfortunately, both fighters got injured in camp, leading to the cancellation of the bout. Lauzon was disappointed, but not to the point where it ruined the first Christmas he and his fiancée Katie were having with Joey.

“Everything with Joey was obviously super crazy,” Lauzon said. “It definitely changes things. Things that before would have seemed like a bigger deal are very, very minor now. Joey’s happy, Joey’s healthy, and that’s the only thing that matters to me.”

And with those horrible few months a distant memory, Lauzon moves on, with Saturday’s UFC 183 bout against rising star Al Iaquinta a good way to get 2015 off to a positive start. With a win, the Massachusetts native will have three straight wins under his belt and a likely spot in the 155-pound top 15. He’ll take the win and hopefully another bonus check, but when it comes to the rankings, that aspect of the sport has never been something he’s concerned about. Of course, with the UFC’s new Reebok deal and the reality that fighters will be paid based on their ranking, it does come into play for Lauzon, but not enough that he will let it affect what he does in or out of the Octagon.

“The rankings never really had any weight to me whatsoever,” he said. “Now it kind of matters a little bit, but I want to have good fights, I want to have exciting fights, and I don’t want to train for someone who’s going to be a wrestler and just try to shoot a single leg and just lay on me for 15 minutes. That’s like a waste of my time training. I want to go out there and have exciting fights and that’s the point where I’m at. If I put together a bunch of wins and I get a title shot, then that’s cool, but I’m definitely not waking up and looking in the mirror and going ‘title shot, title shot.’”

It may be why Lauzon is so popular among fans, media and his peers. He’s a straight shooter who doesn’t come into the Octagon with any tricks. He’s there to fight and finish, making him a must-see every time out. And though boxing’s ills are well-documented, one thing from the sweet science that could be a benefit in MMA is the idea of a champion making an optional title defense every now and then. A champion would have to keep a busier schedule to make this a reality, but who wouldn’t want to see an exciting fighter in the top 15 get a shot at the belt for no other reason than it would be a compelling bout? Lauzon has no problem with this reasoning, and he believes it could lift the excitement level across the board.

“I think that would be awesome,” he said. “And the thing is, I’m not even thinking for someone like me in particular, but I think it would be awesome for the fans. Right now, if guys aren’t ranked in the top couple spots, they fight like they’re on fire. They’re smashing people and they’re really exciting, and then as they get close to a title shot, they dial it down a little bit, they start playing it safer, and it eventually gets to the point where the number one contender is playing super safe and trying not to lose, and you don’t have those spectacular finishes like you do with the guys who are ranked five through ten or six through 14. If guys knew that the optional spot was around and they were going to pick someone exciting, I think a lot more people would have aggressive, exciting fights.”

Top contender or not, Joe Lauzon always delivers on those points, and with 2014 in the rearview mirror, it’s on.