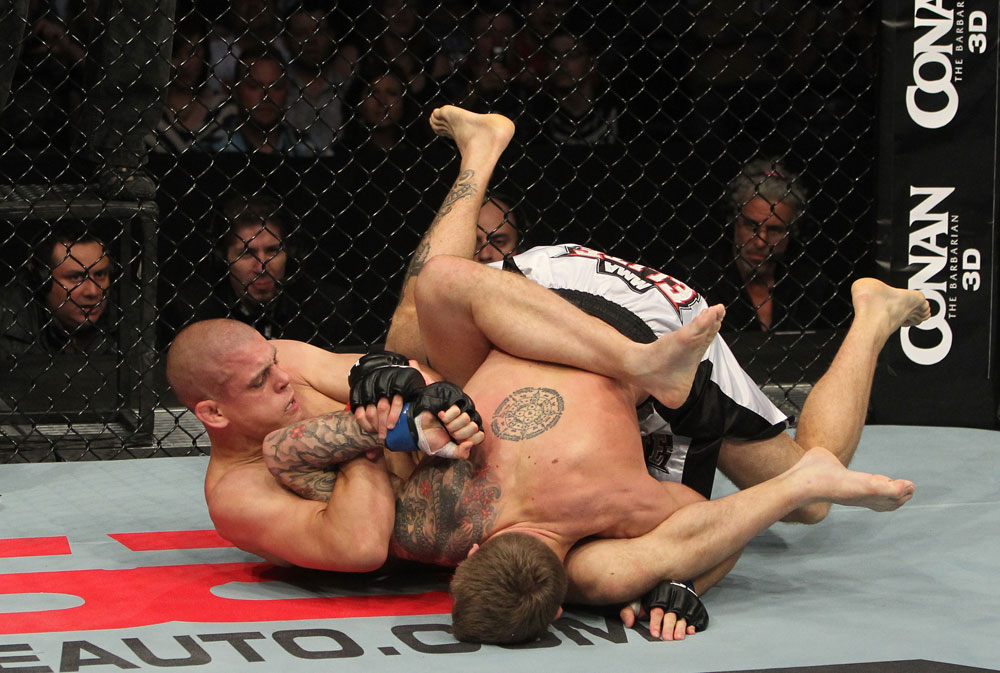 They called it a major upset. Why? That’s a mystery, considering that Joe Lauzon had gone 7-3 in his previous 10 UFC bouts, ending five of them via the ground game that was opponent Melvin Guillard’s Achilles heel in the Octagon.

But when October 8, 2011 rolled around in Houston, Texas, many fans and pundits feared for Lauzon’s health against the Louisiana knockout artist dubbed “The Young Assassin.”

“I knew that Melvin was most dangerous when people are scared, so I wasn’t gonna be scared,” said Lauzon. “I might have gotten knocked out because of it, and he might have beat me, but I wasn’t gonna make it easy. I was gonna come forward and fight hard, and if I lost, I lost. At least I didn’t make the mistake I knew beforehand, which was if I came out tentative, then he would eat me up.”

Lauzon did a complete 180 from tentative, dropping Guillard early and then finishing him off with a textbook rear naked choke. The whole fight took just 47 seconds. And while the fans screamed upset, Lauzon didn’t take the lack of pre-fight faith in his abilities personally.

“I think a lot of people were surprised by it, but I wasn’t surprised at all,” he said. “I didn’t think it was gonna end exactly like that, but I one hundred percent expected to beat Melvin. And I wasn’t insulted. What I may see as a clear cut advantage on my side, other people might think that I’m way outmatched, or vice versa. They might think I have a clear cut advantage on something, but it’s a lot closer than they think. So I don’t really get too upset on things like that. It was definitely an upset in a lot of people’s eyes, but I was really confident.”

More than four months later, Lauzon’s days of creeping up on unsuspecting opponents appear to be a thing of the past. On Saturday night, he faces dynamic rising star Anthony Pettis in a UFC 144 main card bout at Saitama Super Arena in Saitama, Japan, and the talk isn’t of Lauzon upsetting “Showtime,” but of him being in the lightweight title picture with a victory. That’s heady stuff for the 27-year old from Bridgewater, Massachusetts, one of many things on his proverbial table at the moment, including the fact that he’s fighting in one of most fighters’ bucket list destinations – Japan.

“I’ve always wanted to fight in Japan,” said the eight year pro. “Before MMA was real big here, Japan was always the place to go. It’s turned around now, but before, when the UFC was just getting going and gaining all that momentum, Japan was the place to fight, so it’s pretty cool to go back there and be part of such a big card. The quiet fans are going to be a trip. I always hear my corner very clear and I’m very accustomed to their voices, so I can pick them up, but listening to the other corner and all that kinda stuff is all gonna be pretty cool. I think we’ll hear (commentators) Joe (Rogan) and Goldie (Mike Goldberg), and I’m looking forward to all of that. I started training before I started watching the UFC, and honestly, I think I watched a little bit more PRIDE in the very beginning than I did the UFC. There were the entrances with the drums and there were so many people there and the whole entire thing is just a surreal experience.”

And in a place where the fighting culture celebrates not just the winners, but those who deliver compelling fights, Lauzon and Pettis are a perfect fit. Plus, Lauzon believes that though he has been painted as the groundfighter going up against a striker in Pettis, things may stray from that perceived script on fight night, not surprising considering that Lauzon’s standup has looked extremely sharp in his last three bouts against Guillard, Curt Warburton, and George Sotiropoulos, and that Pettis’ wrestling was solid in his recent win over Jeremy Stephens.

“I think Pettis is good everywhere,” said Lauzon. “Everyone knows him as the kid that jumped off the cage, and he’s obviously got good kickboxing, but he’s good on the ground too. I think people forget that part about him. Also, I don’t think he’s got a clear-cut advantage on the feet, like a lot of people are thinking. Everyone looks at me as ‘oh, he’s got so many submissions,’ and this and that, but I think people forget that I’ve been hurting people with my punches and that’s been setting up my submissions. The last couple fights, I smashed guys on the feet, and then I took a submission once it hit the ground. So I don’t see it as this clear-cut striker vs. grappler match that a lot of people are seeing. I favor the ground over standup and I think Pettis favors standup over ground, but I think we’re both pretty even in a lot of areas, and I’m expecting a tough fight and an exciting fight. Most likely, the fight’s gonna end somewhere absolutely crazy, so I’m excited.”

Yet despite Lauzon’s penchant for highlight reel finishes, the way he sees it, none of that is possible without having a firm grounding in the fundamentals – both standing and on the ground – that he works on with guys like boxing coach Steve Maze and grappling guru Ricky Lundell.

“The fundamentals are the most important thing,” he said. “I learned early on, doing jiu-jitsu and grappling and things like that, rather than being really, really good at a couple moves, I wanted to just know 50 moves and be able to impress people and do things like that. But as I got better, those 50 moves weren’t working on people. I had maybe a couple moves that would work on someone that was good. So instead of me trying to learn all those different moves, I just try to focus on the fundamental stuff. That’s all I really care about. You’ll never see me do anything super fancy in a fight, boxing or wrestling wise. I want to be really, really good at the fundamentals. Grappling, I could do a little bit more because I’ve been doing it for so long and I’m so confident and things like that. But if I’m in camp, I’m not trying to go ‘oh, this is a new, cool move;’ I’m trying to do all the things that I already know and tighten things up and get better. One of the things BJ (Penn) said to me on The Ultimate Fighter was that it’s just advanced basics. You have to know the basics inside and out. Whereas someone might know a couple details on it, you’ve got to know all the details on it. You have to know it better than the other guy, and that’s how you’re gonna win. You’ll shut down his basic movements, which are the building blocks for everything else they do.”

In other words, you have to know the rules before you can break them. And now that Lauzon has put in endless hours in the gym and has compiled close to 30 pro fights, he has earned the right to mix things up a bit and add his own particular flair to the basics.

“People think I do a lot of crazy stuff now,” he said. “I used to do so much crazier stuff before. I toned it down, but because I’ve got nine years of doing off the wall stuff, it works out for me. If you’ve got really good fundamentals, then it’s easy to figure out some of the crazier stuff and go outside the box a little bit. But if you don’t know those very basic building blocks, it’s really, really tough to start doing more advanced stuff.”

It’s around this time that it’s safe to start getting excited about this fight, not just because it’s a meeting of two of the top 155-pounders in the game, but two of the most exciting. Yet after nabbing post-fight bonuses in nine of 11 UFC fights, does Lauzon start expecting them?

“I don’t start counting the money, but it’s gonna be sad when I have a fight and I don’t get a bonus,” he laughs. “But I’m more focused on putting a good fight and winning than I am about saying ‘oh, I’m definitely gonna try and get a bonus.’ And the way I fight brings lots of bonuses my way, so I don’t think about it too much.”