"For a little bit it was becoming a grind and I wasn’t enjoying it so much, but it’s been nice to be so dialed in about everything and focused on something so much. I am kinda liking it again.”
By Thomas Gerbasi, on Twitter: @TGerbasi • Oct. 16, 2019

A little over 13 years ago, Lauzon was Pearce, the young up and comer looking to crash the UFC party and spoil the comeback of a beloved veteran.

Lauzon succeeded that night in 2006, knocking out former UFC champion Jens Pulver in 48 seconds. He isn’t about to let Pearce do the same thing in TD Garden on Friday.

“I’m not gonna be his Pulver,” said Lauzon, who will make the walk to the Octagon for the 27th time to face Tennessee’s Pearce. “I get it. I understand exactly where he’s coming from, I see exactly what he’s trying to do, what he wants. No one understands better than me.”

Lauzon is a hundred percent right. Back at UFC 63, the Massachusetts native had garnered positive notices on the regional scene, but he was expected to lose to Pulver, who was making his return to the UFC for the first time in nearly five years and about to square off as a coach against BJ Penn on season five of The Ultimate Fighter. Lauzon got in the way of those plans, went back to work to his IT job the following Monday, and soon, after getting a spot on TUF 5 (competing for Team Penn), his life as a full-time fighter began. Now it’s Contender Series graduate Pearce’s turn. But Lauzon won’t get caught napping.

“I think this is way closer than the Pulver fight was,” he said. “Pearce is tough. He’s tall, he’s long, he’s got good kickboxing and good cardio and the bigger thing is that he just started being a full-time fighter. He was doing well when it was a hobby, and now he’s got this opportunity where it can be a full-time thing, and I think that’s when guys make the biggest jump in their game. But I think we’re ready. I don’t think I’ve been more ready for a fight. I don’t think I’m gonna let him turn me into Pulver for him.”

More than a decade after his debut in the UFC, Lauzon is as ready as he’s ever been for a fight, both mentally and physically. But he’s also nearing the end of a stellar career, something he’s not shy about admitting. In fact, he thought it may have been over when he was stopped in two rounds by Chris Gruetzemacher in April 2018.

“Going into my last fight against Gruetzemacher, I felt like it was definitely a fight I should win,” Lauzon said. “I didn’t look past him, I don’t sleep on anybody; I was just so confident I was gonna win the fight. I felt like I was better everywhere. I didn’t think it was gonna be anything we couldn’t handle.”

Then fight night arrived, and after a solid start, things went south for the New Englander.

“He hit me with a good body shot and I didn’t endure as well as I would have liked,” he recalls. “My corner stopped the fight between the second and third round. I was so confident, and the fact that I didn’t win that fight was a big red flag to me. So we took time. We were so confident in the fight we were saying if we don’t win this fight we’re done. It was like if I can’t beat this guy, we should be done. Then I didn’t beat that guy. (Laughs) I was so unhappy about how it went.”

Lauzon stepped back, got to spend more time with his wife and two boys, and then it was off to the gym again; not only to his own facility, Lauzon MMA, but to Skill of Strength in Chelmsford, a nearly 90-minute drive each way. Why? Well, you know Lauzon was going to fight again. 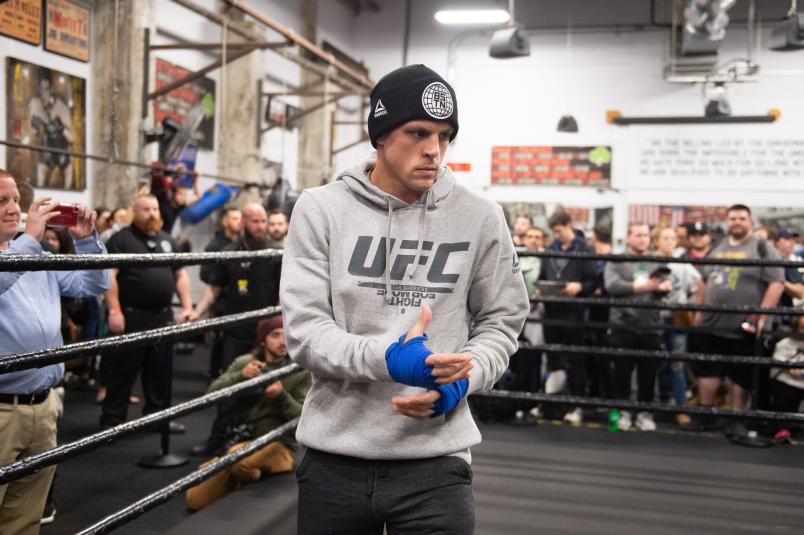 Lauzon chuckles, knowing that this is how a fighter’s life is. You can’t leave on a loss, but you won’t leave on a win, either. But these are all philosophical dilemmas for another day. For now, he’s going to get into a fistfight with Jonathan Pearce in his hometown of Boston on Friday night. Saturday morning? He’ll worry about that when it comes.

“I’m really in love with fight camp all over again,” said the 35-year-old. “My entire adult life I’ve been in some kind of fight camp and I’ve always had a fight coming up. For a little bit it was becoming a grind and I wasn’t enjoying it so much, but it’s been nice to be so dialed in about everything and focused on something so much. I am kinda liking it again.”