Lauzon Is Relieved To Finally Step In The Octagon And Fight UFC Legend Donald Cerrone At UFC Fight Night: Kattar vs Emmet
By Zac Pacleb, on Twitter @ZacPacleb • Jun. 16, 2022

Joe Lauzon’s fight day was going according to plan.

He went through his fight-day workout, ate some lunch and was in the middle of an afternoon nap when one of his coaches knocked on his door a few minutes before the alarm he set.

The rude awakening: Donald “Cowboy” Cerrone was sick, and their bout on UFC 274 subsequently scrapped and moved from Phoenix to June 18 in Austin, Texas.

What was a 20-week camp stretched to 26 weeks, and while a delay like that might not impact some fighters, life is a little more complicated for the 38-year-old Lauzon, whose last fight was in October 2019. Vacation plans, his wife’s work schedule and babysitting arrangements were all thrown into flux, so while he agreed to the rebooking, Lauzon wasn’t necessarily thrilled about it.

“I’ve never had to deal with a fight happening like that where it falls out last-minute,” Lauzon told UFC.com. “That part sucked. For me, it’s a serious thing. If you accept the fight, it’s a serious thing. There’s certain things you have to do with strength and conditioning, and dealing with injuries, and dealing with this, and dealing with that, and getting my wife to rearrange her entire work schedule so she can get to the fight, and having a crappy schedule before and a crappy schedule after so she can get that weekend off, and stuff with my kids and childcare and exhausting all of our babysitters for the fight because my wife comes out for the fight, so I need someone to watch the kids. There’s a lot that goes into it that people don’t necessarily understand.”

A consummate professional with 27 UFC bouts under his belt, Lauzon presumably stepped away from the sport when he knocked out Jonathan Pearce in Boston at UFC Fight Night: Reyes vs Weidman. However, a matchup against fellow veteran Cerrone was enough to get him back into a training camp for the first time in nearly three years.

Even though Lauzon carries frustrations from what went down in Phoenix, he also notes the circumstances were also out of Cerrone’s control.

“It sucks no matter what,” Lauzon said. “We did all this work to have this payoff on a certain date, and then it got another six weeks. You do a job for 20 weeks, and you’re in the home stretch. You’re ready to sign the dotted line, and then it’s like, ‘Oh, we got these other things we gotta get done.’ It’s frustrating. I understand where (Cerrone) is coming from. I don’t think he tried to be sick. I’m sure it would’ve made him happy just to be done with this too. It’s just the way it goes. It’s the fight game, I guess.” 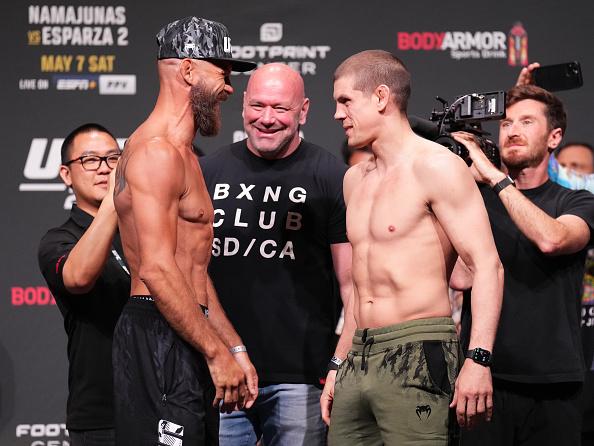 Opponents Donald 'Cowboy' Cerrone and Joe Lauzon face off during the UFC 274 ceremonial weigh-in at the Arizona Federal Theatre on May 06, 2022 in Phoenix, Arizona. (Photo by Chris Unger/Zuffa LLC)

Because camp already spanned nearly half a year in the first place, Lauzon was more worried about the additional wear-and-tear than he was thankful for more time to prepare for “Cowboy.” And when two fighters share the amount of Octagon time Lauzon and Cerrone do (64 combined fights worth, to be exact), there’s not a lot of tricks to be held up one’s sleeve come fight time.

Even so, Lauzon is feeling ultra-confident heading into UFC Fight Night: Kattar vs Emmett, and the extra icing on the cake is the prospect of fighting Cerrone himself.

“Cowboy is a big deal,” Lauzon said. “He’s a very, very big name. He’s had all kinds of great fights, won tons of bonuses, definitely a fan-favorite, arguably one of the most well-known UFC fighters from fighting and everything else. He’s a maniac. He’s got a great social media game between all his different sponsors and stuff like that. Just a fun guy to follow, so beating a guy like that is a big deal. I’m looking forward to the challenge.”

In terms of what comes after this for Lauzon, he basically said if the name, location and date all line up favorably, he’s open to another bout, especially if UFC returns to Boston. He tossed out Jim Miller’s name as one of interest. The two dueled twice before and picked up Fight of the Night both times, with Miller earning the judge’s nod in each contest, as well.

All in all, though, Lauzon is most excited to get to fight day, actually step into the Octagon and duke it out with a fellow vet. It’s a matchup he’s more interested in at this point of his career than fighting a prospect with less weight to their name, although he isn’t opposed to that kind of fight either. Regardless of what’s next, his present remains aimed at Cowboy, and he’s had about half a year to think about making the walk for the first time in more than 30 months.

“I feel as prepared as I could be,” he said. “You can never guarantee a victory, but I feel really good about where I’m at.”