"If I go out there and blast through people, people are gonna remember
and enjoy the fight. As a competitor, that’s how I’m picturing the fight." - Joe Lauzon 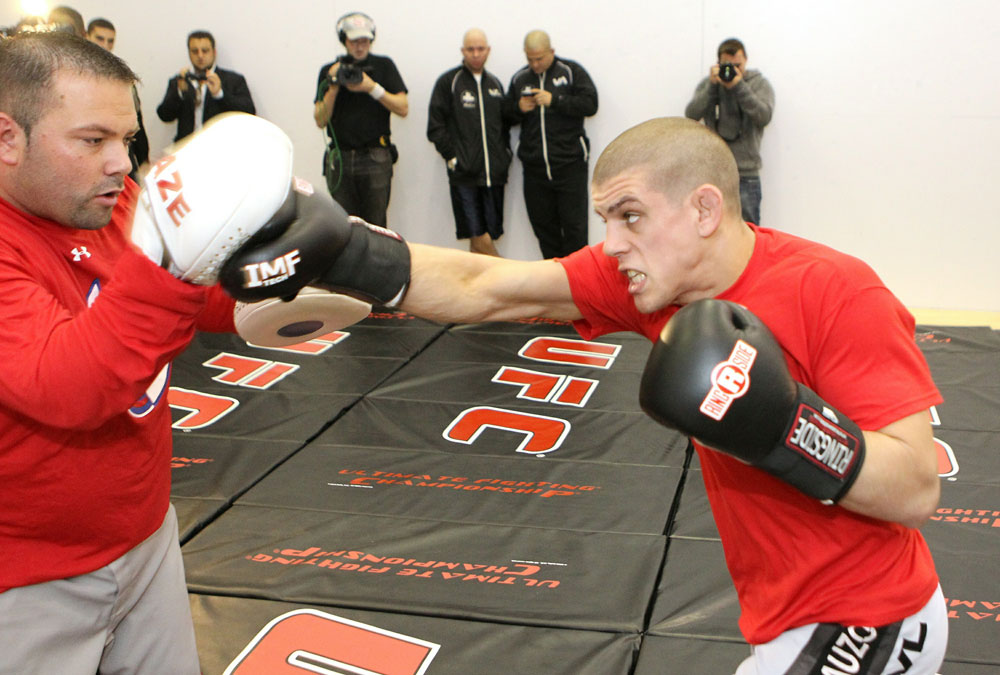 As the crowd at Boston’s TD Garden roared for their favorite son, Joe Lauzon, last August, the rising lightweight star almost knew that his first round victory over Gabe Ruediger was going to be a hard one to follow.

For 121 dominant seconds at UFC 118, Lauzon, simply put, did everything right. And if you want to go with the cliché that Ruediger never had a chance, you would probably be accurate, as “J-Lau” delivered the best performance of his UFC career, and he did it at home, no less.

How do you top that? Lauzon wondered the same thing.

“My whole career, I’ve been constantly looking for ways to get better, and how do I really improve on a fight like Ruediger,” he asks. “I go in there, I hit him a couple times, I threw him on the ground, I was all over him on the ground, I flung him around, I beat him up, and I got his arm. After the fight with Ruediger, where do you really go? Obviously everything always needs improvement, but there was no glaring weakness.”

Luckily for Lauzon, George Sotiropoulos got him back on track, and though the New Englander wound up with a second round submission loss on his record last November at UFC 123 thanks to the Aussie contender, now he knew where the holes were and he could move forward.

If it sounds like a crazy concept, it’s not. It makes perfect sense because no one goes back to the drawing board and picks themselves apart after a win. In this sport, it’s the losses that make you better, and if Lauzon one day holds a UFC championship, he will look back at Sotiropoulos, and not Ruediger, as the fight that was the turning point.

But back to Detroit, and a fight Lauzon looked like he was on his way to winning after the first five minutes.

“I thought that was my best fight boxing-wise,” he said. “I honestly felt like I couldn’t miss during the fight and I thought I showed some good improvement there. I paced myself pretty good in the first round as well, and I don’t think that the pace that I pushed was what really did me in,” said Lauzon. “I felt good at the end of the first round and in between rounds I felt okay.”

Then it was time for round two.

“I went to step off the stool and my legs felt like concrete. Then I knew I was in trouble. Everything we had been doing was working on the jab and beating him to the punch, and those things rely on me moving my feet and getting in and out and moving around the ring. So I knew I couldn’t keep that same gameplan and it was definitely not a good feeling at all, especially since I saw him at the end of the first and he was completely broken. He just looked like he was done.”

Sotiropoulos was far from done though, and at 2:43 of the second stanza, Lauzon tapped out to a kimura. It was a disappointing defeat, his second in three fights, but while the 27-year old probably picked apart his mistakes for days and weeks, just by getting off the stool for round two when he had nothing left, he showed what it means to be a fighter.

“You just gotta push on,” he said. “In training we do a lot of shark bait stuff, which is basically designed to make you feel like crap and to train you to keep pushing, even when you’re exhausted. You’re always a little bit slower, and you’re always not quite as strong. It’s kinda like blindly rushing in when you know things aren’t gonna go well. You’re completely exhausted and you really just don’t have anything to offer, but you’re still gonna try. It’s tough, but you have to do it. There’s no other choice. You’re there to fight and that’s what you do. There’s no time outs. And maybe I get knocked out, but I’m gonna go out there and try and get it done.”

Since then, Lauzon has been working his cardio “like crazy,” along with the other aspects of his game to get ready for Sunday’s bout against England’s Curt Warburton. But the work just doesn’t take place in the Lauzon MMA gym. For him, fighting is a 24/7 job, even when he’s not on the card.

“It’s pretty tough for me to be a fan,” he laughs. “I’m always looking for things and comparing what other people are doing with what I would do. So it’s pretty tough for me to sit back and enjoy a fight because I’m constantly analyzing stuff. And I’m always trying to get better too. I’m real good at picking up habits on the ground, and I’m really trying to pick up on things by watching standup stuff now. Boxing came really, really slow to me, and that’s one thing I’ve been really focusing on and trying to get better at, because for jiu-jitsu, I pay very close attention, and I’m very analytical. But for boxing, I was never like that, so I’m really working on getting better at.”

So don’t expect him to be screaming “elbow” from the cheap seats on fight night.

“I do enjoy analyzing and breaking things down, but I think a lot of people are sitting back and just waiting for someone to get hit in the chin and go down, and that’s definitely not me.”

In Warburton, Lauzon will be facing a fighter short on UFC experience, but long on talent and potential. “The War” is 1-1 in the Octagon, with a close decision loss to Spencer Fisher last October and a points win over Maciej Jewtuszko in February. Needless to say, Lauzon has a scouting report on him.

“I think he’s tough,” said Lauzon. “He seems like more of a kickboxer than anything, he’s very comfortable in the clinch and he looks like he’s got that wiry, tendon, wrestler-strength. I feel like he’s not necessarily gonna move me around, but slow me down, and that can be tough to deal with sometimes, even though with the exception of Manny Gamburyan, I haven’t felt that anyone I fought in the UFC has been stronger than me. And even though I don’t look that strong, I feel much stronger than I look, but I might not have that advantage this time around. So we’re working on trying to be quick, beating him to the punch, and all that kinda stuff.”

Just don’t expect Lauzon to be sniffing out a fourth Fight of the Night award this weekend.

“Back and forth fights are good, but the way that I impress the people the most is when I put on a fight like the Ruediger fight,” he said. “I show what I’m gonna do, and it doesn’t really matter who’s out there with me. If I go out there and blast through people, people are gonna remember and enjoy the fight. As a competitor, that’s how I’m picturing the fight – I go out there, dominate the fight, push through, and do what I want to do. I don’t want people to see that he’s good. I don’t want the fight to go his way whatsoever the entire time. The people who didn’t know him before, I don’t want them to know him after the fight either, because Fight of the Night may be nice, but that means it’s back and forth and it’s a super tough fight. I don’t want that. I want to control and dominate.”

And if he has to walk through fire, that’s fine too, because he’s expecting a war from Warburton. That doesn’t mean he can’t try to repeat the Ruediger fight. This time though, expect a better follow-up from a young man who doesn’t specialize in making the same mistake twice.