“I think in a way, what I do for a living has helped me survive.”  -  Joe Ellenberger 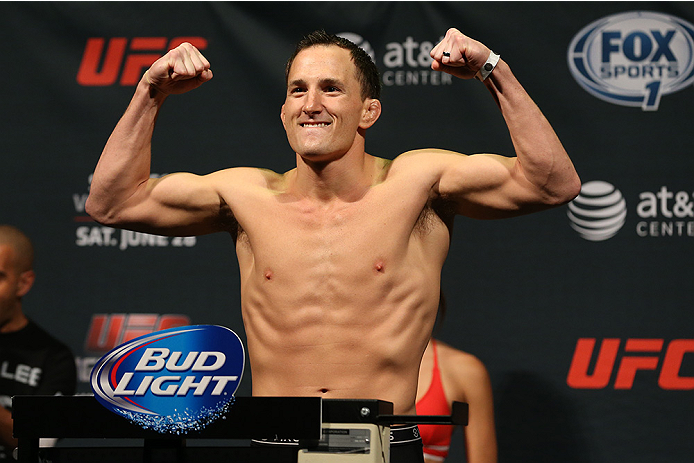 Just five years ago, at age 24, UFC lightweight Joe Ellenberger wasn’t sure he would live to see his 29th birthday, let alone see a second fight in the Octagon at Fight Night Phoenix in US Airways Center this Saturday night against MMA Lab product and UFC newcomer Bryan Barberena.

In 2009, Ellenberger was diagnosed with a rare blood disease called paroxysmal nocturnal hemoglobinuria, and was told he had about five years to live.

“I think I’ve gained a lot of perspective going through what I’ve gone through, but also I’ve gained a certain knowledge and appreciation of the people around me and who support me,” Ellenberger says as his second child, nine-month-old daughter Myla, coos in his arms. “If you look at where I am now as compared to five years ago, it’s been quite a journey.”

Not only have the doctors who are successfully treating Ellenberger’s condition given him a second chance at life, they also gave him a second chance to compete in the UFC. You see, his first offer to fight in the world’s premier organization, where his twin brother Jake had already been mega-successful, came just a few weeks after the diagnosis.

Nearly five years to the day of his diagnosis, Ellenberger made a successful UFC debut in June, besting James Moontasri at UFC Fight Night in San Antonio, Texas. He understands what his next opponent might be going through as he prepares to make his own UFC debut.

“He’s excited, nervous,” Ellenberger says. “He has ten or eleven fights, so he’s been around the game for a while but he’s making his debut at 155 so I’m sure his weight is on the top of his mind. He’s fighting in his backyard in Phoenix so I’m sure he’s excited about that, but coming into the UFC and facing a guy like me can’t be all that good. There are no easy fights in the UFC, especially at 155. The lightweight division is stacked with so many great fighters whether you’re a veteran or making your debut; it’s going to be a tough fight.”

Indeed, while Ellenberger is only making his second appearance in the Octagon, he has the benefit of training with and cornering his brother for most of his fights over the past several years, so being around the lights, the stage and the larger than life personalities that make up the UFC is old hat to him.

“Look at Sergio Pettis,” he said. “He’s got his brother Anthony in his corner, so he can attest to this as much as I. My brother has sacrificed a lot and has paid his dues in this sport. When someone like that is in your corner who believes in you even more than you do, it’s really inspiring and emotional. And another way I look at it is, if Jake Ellenberger can’t finish me in those ten rounds we spar every day, there’s no way Barberena is going to. It’s a big confidence booster and it’s great to have him in my corner.”

The fact that Jake fights at 170 pounds will also come in handy for Joe, as his opponent Baberena has fought up to 185 pounds in the past.

“I imagine he’s going to be a lot bigger than me,” Ellenberger says. “He’s tall and thick and he trains down at the MMA Lab with Rick Story and Ben Henderson, so he’s got a good bunch of hard-nosed, tough guys to work with. I’m not expecting this fight to be easy by any means. He hasn’t fought in quite a while like me in my last fight, but he’ll come ready to win in his debut and knock me off, but I’m looking to use him to help get to the next level.”

The next level he’s thinking about isn’t so much a slow and steady wins the race type of thing. He’s looking to make his mark on one of the most dynamic divisions in the sport, and fast.

“I’m not in the game to fight some guys, collect some checks and say I was in it,” he said. “I want to fight for the UFC gold. If that’s not your goal, then I don’t understand what you’re in the sport for. It isn’t about money and glory. When you’re in the gym putting the work in, and you’re getting better and better, anybody in the division can be less than five fights away from a title shot now, so my goal now is to build some steam, improve my game and climb the ranks as fast as possible. Look at Robbie Lawler. A few years ago he was in danger of being cut from Strikeforce, and now he’s the UFC welterweight champion. It’s about working hard and believing in something that is bigger than sport. It’s about believing in you.”

Coming from someone who just a few years ago was in danger of being cut from something much bigger than a fight organization, those are inspiring words that mean more than just filling quotes for some article. Those are heartfelt beliefs that have carried Joe through some dark days on his way to where his today.

“It’s funny,” he says. “When I first got diagnosed, my doctors thought I was a professional wrestler. They didn’t really understand what MMA was at the time. But now they know what it is and what it is I do for a living, and I think they have respect for not only the sport, but for what it takes to compete. I think they understand the kind of heart it takes to not only be in the UFC, but also to fight a disease like the one I have. I have to train smarter, not harder. I have to recover every day and make sure I stay healthy. My body has been through a lot just with my disease, so fighting is something that my doctors aren’t too thrilled with, but they understand and I think, in a way, what I do for a living has helped me survive.”