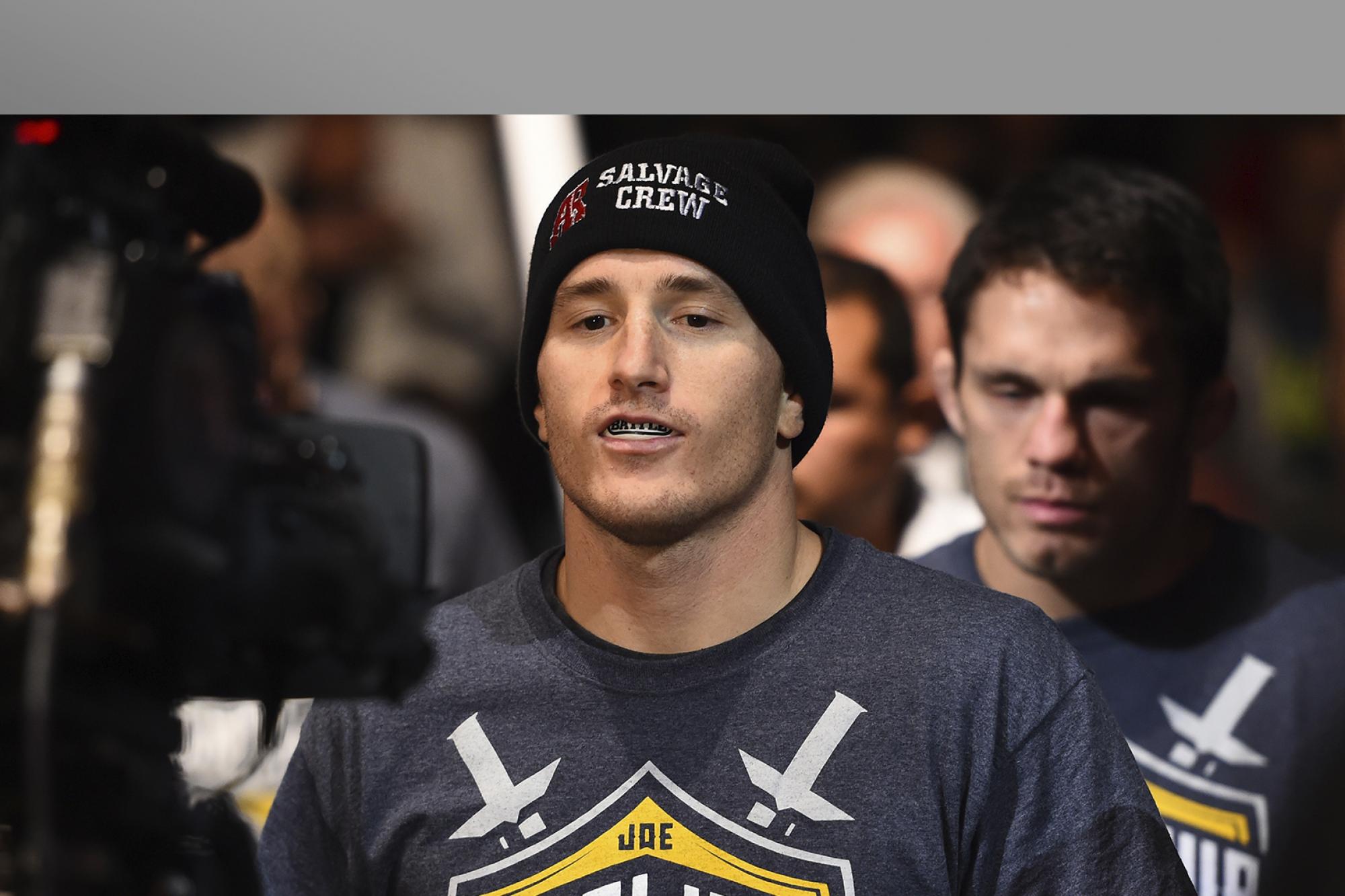 Despite being diagnosed with a rare blood disease and suffering a detached retina, Joe Ellenberger didn't let that stop him from becoming what he wanted to be.
By Thomas Gerbasi, on Twitter: @TGerbasi • Mar. 28, 2020

Joe Ellenberger coulda been a contender.

The Nebraska native had the potential to be even more than that in the UFC if the universe didn’t throw roadblock after roadblock in his way. But the 35-year-old doesn’t show a hint of bitterness when it comes to how his mixed martial arts career played out.

“I've never had that stance or outlook,” he said. “My brother (former welterweight contender Jake Ellenberger) has always asked me about that too. He would always say, 'There are guys out here that you would absolutely destroy if you were out here, doing well and making money. Doesn't that piss you off?' Well, a little bit (Laughs), but I can only control what I can control, and it's not really worth getting bent out of shape for something that's out of my control. I try to see a silver lining in everything, and I think where I'm at now, I'm not upset, I'm not bitter with where my life's gone. And I think being able to overcome a lot of that adversity through my life has definitely helped me as a man, as a father, as a husband.”

A married father of three, Ellenberger’s life these days consists of being a family man, doing HVAC work in his hometown of Omaha, and serving as an assistant wrestling coach at his old high school, Millard South. To a lot of those folks, he’s just Joe, Dad, or Coach. But there was a time when “Excalibur” was seen as one of the top prospects in the lightweight division, one destined to make some noise in the big show until an MMA career that started out at 10-0 came to a screeching halt when he was diagnosed with a rare blood disease called paroxysmal nocturnal hemoglobinuria (PNH) in October 2009. 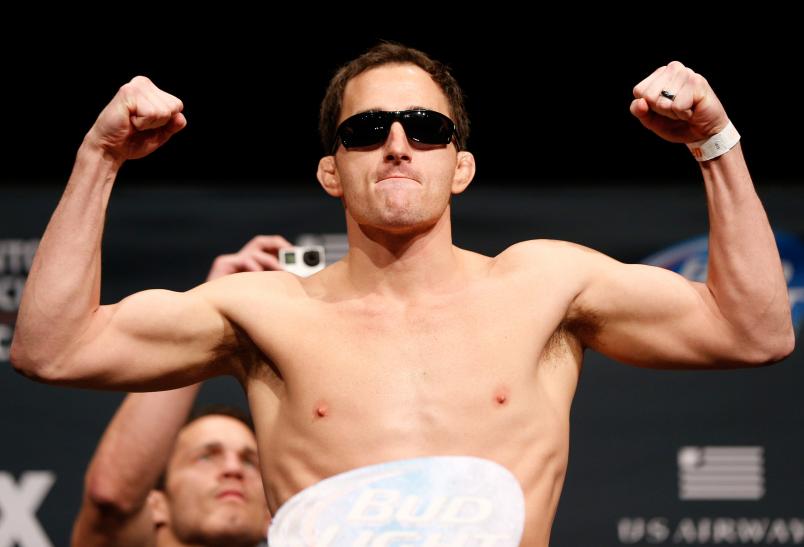 Joe Ellenberger weighs in during the UFC Fight Night weigh-in event at the Phoenix Convention Center on December 12, 2014 in Phoenix, Arizona. (Photo by Josh Hedges/Zuffa LLC via Getty Images)

At 24, Ellenberger was told he would be lucky to make it to 30, and fighting for a living, well, that was an idea that was off the table as well. But fighters fight. And Ellenberger wore out all options in search of something that would save his career, but more importantly, his life.

Luckily, insurance and help from the National Organization for Rare Disorders pitched in, and by 2011, Ellenberger had the disease under control and was cleared to fight. Upon his return, he went 4-1 with two finishes and got the call he had long been waiting for.

Joe Ellenberger was a UFC fighter.

That’s not to say the drama was over yet. In fact, it took two dates, two states and six opponents before James Moontasri finally entered the Octagon to face Ellenberger in San Antonio on June 28, 2014, and after three rounds, Ellenberger got the decision win and was on his way.

“At one point, I thought this wasn't meant to be. I don't know what's going on here, but it's not gonna happen. So I was relieved, really,” he said of his first fight in the UFC. “I was happy, I was excited. More than anything, it was to prove to myself and prove to other people that they can get an insurmountable of adversity thrown at them and battling through it and getting it done is not impossible.” 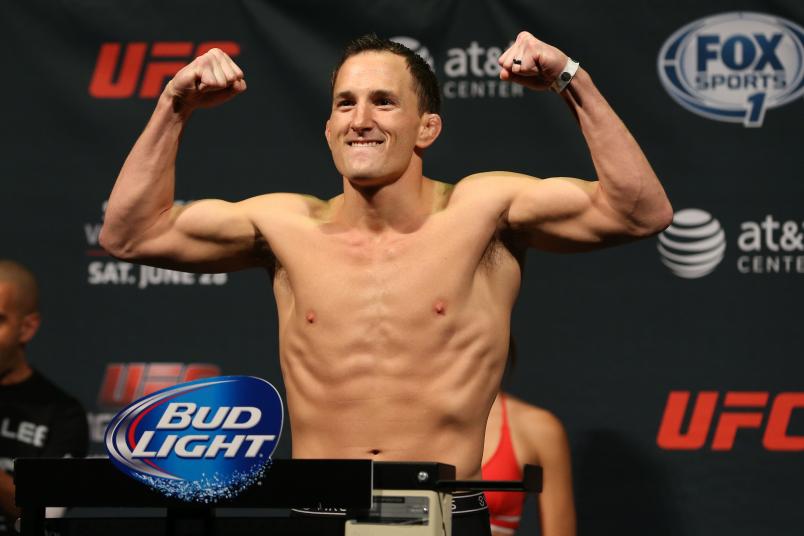 Six months later, Ellenberger’s second UFC fight didn’t go so well, as he was stopped in the third round by Bryan Barberena. It was a setback, but not a crippling one. Hey, people lose in the UFC and rebound. But Ellenberger never returned.

It turns out that in the Moontasri fight, Ellenberger detached the retina in his right eye, something that wasn’t diagnosed until after the fight with Barberena when he went to a routine appointment to get checked out for possible laser eye surgery.

“The lady looked at my right eye and left the room in a hurry,” he recalled. “When she came back, she said you need to see this retina specialist.”

A week later, Ellenberger was in surgery to repair the detached retina.

“That was a pretty rough surgery and that was about a ten-day recovery where I had to buy a massage bed and lay face down for 20 out of the 24 hours for ten days straight,” he said. “That was the absolutely worst ever.” 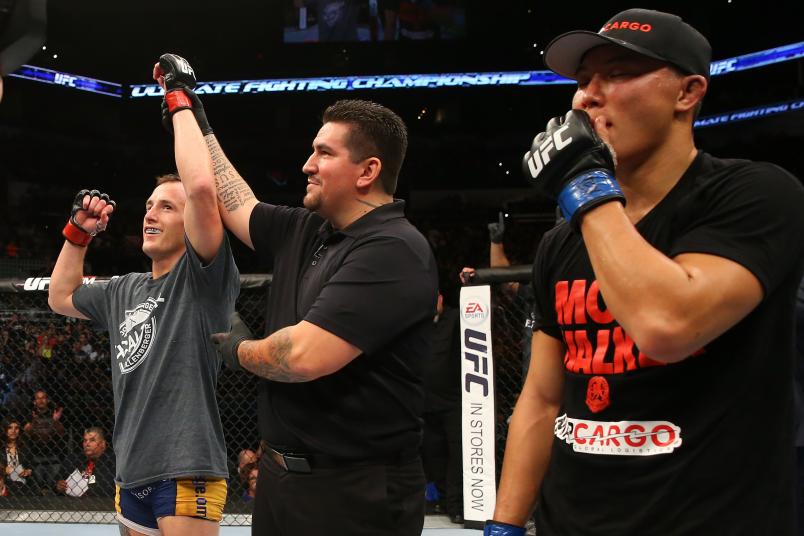 Joe Ellenberger (left) reacts to his victory over James Moontasri (right) in their lightweight bout at the AT&T Center on June 28, 2014 in San Antonio, Texas. (Photo by Ed Mulholland/Zuffa LLC via Getty Images)

That doesn’t mean brotherly love didn’t show up in the midst of all this as he celebrated one of his kids’ birthday with the family.

“We have pictures of the day and I had an eye patch on still,” Ellenberger laughs. “And of course my family all made a big joke of it; they were all wearing eye patches and we had a big party that night. Jake had one on and Adam had one on and they were all laughing. It was a good time, making a funny situation out of something that wasn't.”

Eventually, everything healed up, yet during a visit to a retina specialist in last 2018, early 2019, it was recommended that Ellenberger not fight again.

“He said, ‘It's back on there, but if it was me I wouldn't fight again just because of the risk.’ He was thinking more along the lines that you're gonna favor that right eye so much that if your left one gets banged up bad and you detach that one, you have to do all this all over again. I'd rather see good with both eyes for the next 20 years versus risking it and not. That's kind of where we're at.”

That doesn’t mean Ellenberger doesn’t get the itch. In fact, he’s still in the USADA testing pool, so should he decide to make a return, he’s got all his ducks in a row.

“I still get the UFC's anti-doping folks coming by and testing me every now and then,” Ellenberger laughs. “But right now it's just a busy time. My kids are 7, 5 and 3 years old, so having a real job and trying to train is a little bit tough. But I obviously haven't ruled out getting in there and giving it another go. Every now and then I feel like I'd like to get back in there but I guess time will tell. We'll see what happens.” 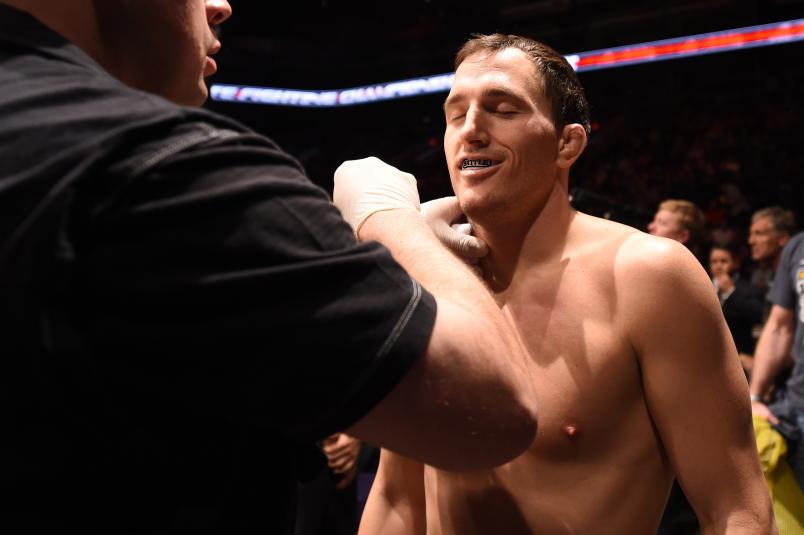 Joe Ellenberger prepares to enter the Octagon before facing Bryan Barberena in their lightweight fight during the UFC Fight Night event at the U.S. Airways Center on December 13, 2014 in Phoenix, Arizona. (Photo by Josh Hedges/Zuffa LLC via Getty Images)

Whatever happens, Ellenberger is going to have some story to tell those kids, as well as the ones he coaches. The main lesson: it’s not always about the destination.

“I hope it gives them perspective and gives them hope in something that maybe they think might be bigger than they are,” he said. “Or it gives them that perseverance and an attitude of gratitude that it may not go their way or end up how they want it to end up, but just embrace the journey. I'm still an assistant wrestling coach at my old high school, and I tell these kids a lot, it's not all about the destination. Obviously, everyone wants to be a State champ or a National champ or the World champ, but doing what we do every day and then at the end, falling short of your goal, it's process over result. What you go through during that year is still gonna make you a better person, whether you won it or not.”