BALTIMORE, April 26 – In his first bout since his title fight loss to Demetrious Johnson last December, flyweight contender Joseph Benavidez powered his way to a submission win over Timothy Elliott in UFC 172 prelim action Saturday at the Baltimore Arena.

Elliott was a whirlwind of motion from the second referee Mario Yamasaki called the fighters to battle, putting Benavidez on the defensive immediately. Elliott’s ground work was particularly impressive, but in the second half of the round, Benavidez made his move on the matt, sinking in a guillotine choke Benavidez later named the Joa Constrictor. Elliott fought it off as long as he could, eventually though, it was game over, with referee Mario Yamasaki calling the fight off at 4:08 of the opening frame.

Lightweights Takanori Gomi and Isaac Vallie-Flagg gave the Baltimore Arena fans a show in their slugfest, with Gomi, the former PRIDE great, eking out a close, but unanimous decision.

With a Vallie-Flagg fight, there is no question who will be leading the action, and the Albuquerque 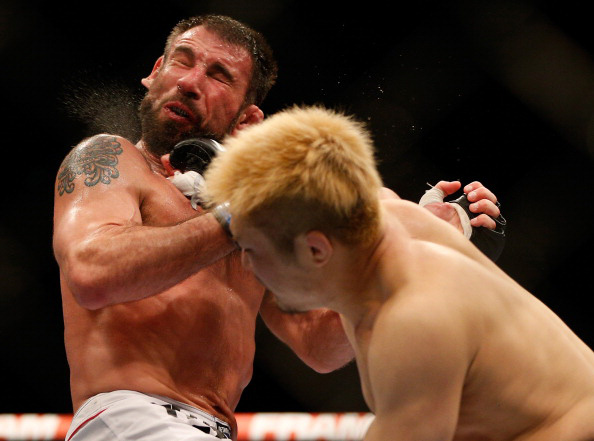 veteran didn’t disappoint as he fired off kicks and punches at Gomi. A slip to the canvas by Vallie-Flagg gave Gomi his best offensive chance of the round, as he landed several ground strikes and then took his opponent’s back. After a near-rear naked choke attempt by Gomi, both fighters rose, with Vallie-Flagg still staying busy to the bell.

Vallie-Flagg kept the pace high in the second, but Gomi began to find his range, first matching his foe blow for blow, and then surpassing him, cutting his opponent under the right eye.

The body attack of Vallie-Flagg started to get to Gomi in the third, yet “The Fireball Kid” wouldn’t yield, especially not with the fans chanting his name, and a ferocious rally by the Tokyo native had the crowd roaring with each shot. By this time, Vallie-Flagg’s face was covered in blood as the two grappled against the fence, and though the American landed a late takedown, it wasn’t enough to get him the nod on the scorecards.

Duke did a decent job of keeping Correia at bay with her jab in the first, utilizing her height and reach to full advantage. Correia got her shots in though, landing leg kicks and the occasional power shot to the face. And while it was expected that as the fight hit the deck in round two, Correia would begin to take control, it didn’t happen though, and as the two rose and the Brazilian tried to keep Duke locked up, a picture perfect judo throw from the Ultimate Fighter 18 competitor got a roar from the crowd. The Brazilian continued to press though, and her greater striking accuracy was giving Duke problems, especially as she pushed the pace in the third.

Lightweight standout Danny Castillo put the hurt on Charlie Brenneman in their bout, knocking out “The Spaniard” in the second round. 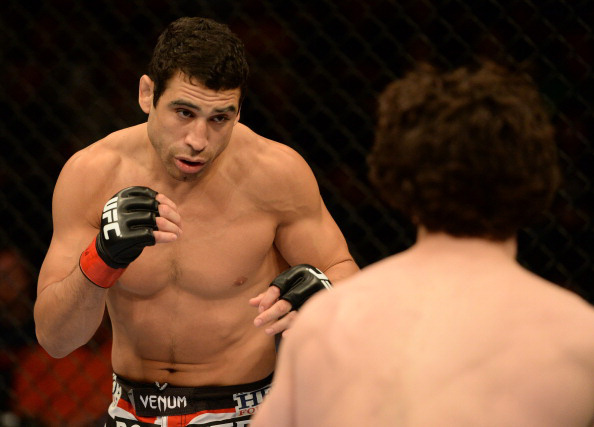 Brenneman (19-7) did some of his most impressive ground work of his UFC career in the opening round, yet despite two takedowns and a near-armbar, Castillo (17-6) was consistently able to keep himself out of trouble, allowing him the time to regroup and get on the board offensively.

Seconds into round two, the wait was worth it, as Castillo swung a right hand from the cheap seats that exploded on Brenneman’s jaw. A follow-up wasn’t necessary, as referee Dan Miragliotta intervened 21 seconds into the frame.

The Ultimate Fighter 18’s Chris Beal left quite an impression in his Octagon debut, knocking out fellow bantamweight newcomer Patrick Williams in the second round.

Both bantamweights got after it from the start, with Williams (7-4) holding an early edge, but Beal roared back to rock his foe a few times and put him on the run. In the second, Beal (9-0) lowered the boom in spectacular fashion with a picture perfect flying right knee that landed flush. Williams hit the deck hard, with referee Herb Dean calling an immediate stop to the fight at the 1:51 mark.