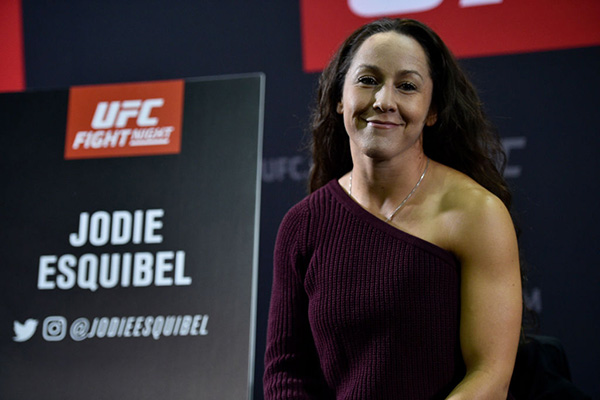 Jodie Esquibel interacts with media during the UFC Fight Night Media Day inside Ergo Arena on October 19, 2017 in Gdansk, Poland. (Photo by Jeff Bottari/Zuffa LLC)" align="center" />When Jodie Esquibel was announced as one of the strawweights competing for a spot in The Ultimate Fighter 23 competition in 2016, many pegged her as an early favorite to win the tournament.

Then she lost a controversial split decision to Ashley Yoder, and everything came crashing down.

“I win the show nine times out of 10,” Esquibel said. “That was the one time. I was so ready and so there, and I was like, ‘What am I doing with my life? What just happened?’”

Ready to pack her bags and head back to Albuquerque, Esquibel was consoled by her boyfriend Keith Jardine, someone who knew plenty about the ups and downs of a mixed martial artist’s life. He suggested one more day in Las Vegas to relax and take in the town before figuring out the next step.

Esquibel agreed and the two checked into their favorite hotel. When they got to their room, Esquibel opened the curtain and looked out the window.

“Our room was facing the UFC gym,” she recalled. “I can see the garage and I was like, ‘Oh my God, why? Are you kidding me?’”

Jardine offered to get their room changed, but Esquibel refused.

Looking back, Esquibel can laugh at that moment, but more importantly, as she prepares to make her UFC debut on Saturday against top five strawweight contender Karolina Kowalkiewicz in Gdansk, she can also realize that everything happens when it’s supposed to. 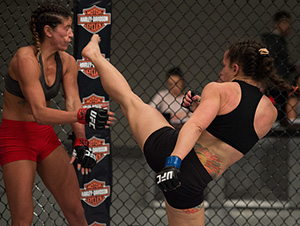 “It took me a couple weeks to want to get back in and actually train, but I wasn’t like, ‘What am I doing with my life?’” she said of the days after TUF 23. “It was more like, after seeing all the girls and being there and knowing that I won the fight, that was reconfirmation that I was on the right path. It just wasn’t the right time. And it wasn’t.

“Now, I feel so good about everything,” Esquibel continues. “It’s super cliché to say everything happens for a reason, but I’ve never taken an easy fight, I never shied away from a fight, I’ve always taken the harder path, and I felt like I just couldn’t get a break with my career in general. And I feel like I’m battle tested because of it. So all that stuff is fuel for the fire to know that this is where I’m supposed to be and what I’m supposed to be doing.”

Whether it was in MMA or pro boxing, Esquibel was destined to be fighting somewhere. A 15-fight veteran of the sweet science, the 31-year-old may have only mustered a .500 record, but that slate is deceiving, as she fought for world titles, took one of the sport’s best – Ava Knight – to a draw, and also faced another pound-for-pound list member in Carina Moreno.

And though the opportunities weren’t really there for female boxers at the time, she wasn’t about to jump across town to Greg Jackson’s MMA gym.

“In the beginning, Mike Winkeljohn was separate from Greg Jackson, and the MMA fighters would come up and cross train to work on their boxing and kickboxing,” Esquibel recalls. “And our guys who were crossing over would go down to Greg. There weren’t that many girls in the gym when we were boxing, so it was never a big deal.”

One of the Jackson crew, John Dodson, became a fast friend, and he would always invite Esquibel to train with the MMA gang.

“He was always like, ‘Come to wrestling class,’ and I was like, ‘Oh, that’s disgusting. You guys smell, it’s gross, I don’t want to roll around with you gross people.’ (Laughs) It was a real shady looking gym with a mat rolled out in a strip mall. Guys like Keith were out there ringing out their t-shirts and I said, ‘Absolutely not.’ But he would tell me every time he saw me to come to practice, let’s work on some stuff. And if I hadn’t been so hard-headed, I would be light years ahead of everybody.” 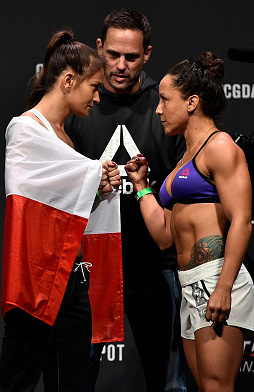 Eventually, Winkeljohn and Jackson would join forces in the same gym, and with boxing not providing what she needed, she decided to give MMA a shot.

“The difficulty of boxing was the ability to stay busy,” she said. “Yeah, I could fight overseas for very little money and have to fight the judges and the crowd and the person and probably not get a decision, and now I have a horrible record. I don’t have a good boxing record, but all those fights I fought overseas I didn’t lose.

“So when we merged into one gym, there was wrestling class right after kickboxing class and how do you say you don’t want to learn this from one of the greatest coaches of all-time?” Esquibel continues. “How do you turn that away? It was too intriguing, it was the best opportunity, and once I started opening my eyes to mixed martial arts, I immediately regretted the hard stand I took about staying with just boxing and kickboxing. And I fell in love with it.”

Esquibel turned pro in 2011, and she still boxed three more times, but it was MMA that had her full attention, and she quickly found out that it wasn’t as easy for a boxer to make the transition.

“I don’t think people don’t understand how different it is, and I didn’t at the beginning. I said, ‘I’ll just learn to defend the shot and get back to my feet.’ That worked really well until I got choked out, so there’s that.”

Her 5-1 MMA record got her the call to TUF, and after that, she split two Invicta FC fights, losing to Alexa Grasso and beating DeAnna Bennett. Now she’s in the UFC, and after this long, strange trip, she’s about to debut in Europe in a co-main event against one of the top 115-pounders in the game. That’s quite a ride, but she’s earned her place on the roster.

“For us being in a lifestyle that’s full of surprises and not being able to control everything, you try to play scenarios over in your head so you’re not completely taken back when it does happen,” she said of the moments before the Octagon door shuts tomorrow. “And I’ve thought about giving myself the opportunity to be there in that moment and feel everything and smell everything and see everybody. I’m giving myself that gift of not giving up and taking the hard road and knowing that hard work pays off. Because sometimes people don’t get that opportunity. Sometimes people stop short for whatever reason, and that sucks. I always just wanted to be able to give myself that opportunity and I know that I will.”