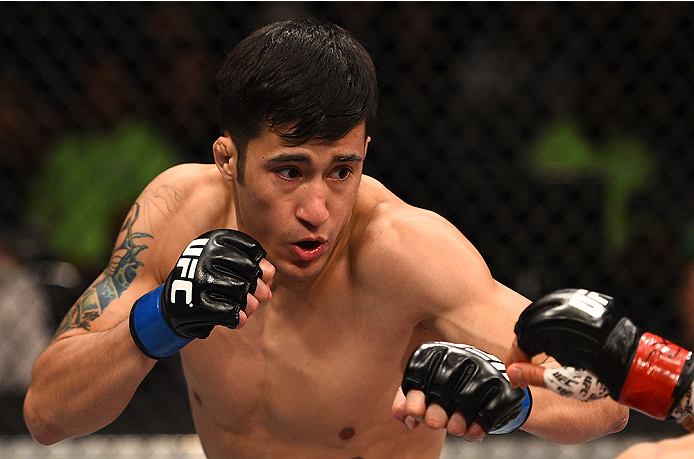 There are fewer badges of honor more prominent in the realm of athletics than being labeled a “gym rat.”

While the designation may sound derogatory in tone, nothing could be further from the truth. It simply means the person involved eats, breathes and practically sleeps in the gym as they are busy working toward a mastery of their craft. And, by definition, talented UFC flyweight prospect Joby Sanchez certainly meets the criteria.

The 24-year-old Albuquerque native is a constant presence on the mats of the Jackson/Winkeljohn facility. He’s one of the first bodies to get working once the fluorescent lights flicker on in the morning, and always one of the last to leave once the mops hit the mats and the workday is complete. He does all of this in the shadow of the great fighters and champions that have come before him and the larger than life portraits that hang overhead on the newly minted “Wall of Fame.”

“I’m born and raised in Albuquerque, New Mexico and I’m here to do work,” Sanchez said. “I’ve been boxing since I was seven years old and wrestled all through high school. Making the transition to mixed martial arts has felt like a natural progression for me and I’m absolutely in love with the sport. I train every day because that is where my heart is at. I know the saying goes that there is always someone out there working harder than you, but I refuse to believe that because I work my butt off every single day and give everything I have to give inside the gym.

“I’ve been extremely self-motivated ever since I was a little kid. I grew up with a lot of talented people around me and I’ve always been the one who has had to work a little bit harder to keep up. It’s just something that’s been inside of me since I was young.”

With every session Sanchez grinds out, he believes he’s taking one step closer to getting his picture up alongside fighters he’s idolized for years, but he’s also self-aware enough to know sweat equity is only a partial element to the overall equation of success. The hard work matters because it always does, but it ultimately takes winning at the highest level of the sport in order for true progress to be made.

While Sanchez came up short in his UFC debut, he was able to flip the energy back into a positive direction when he bested Tateki Matsuda at Fight Night: Henderson vs. Cerrone back in January.

“It was an amazing feeling to get my first win in the UFC,” Sanchez said. “I started watching the UFC when I was 13 years old and to be inside the Octagon getting my hand raised 10 years later was a totally surreal feeling.”

Of this, the lightning-quick 125-pound scrapper has no illusions, and it’s the place where the proverbial rubber meets the road where he finds the most excitement. As a product of the rough and tumble Albuquerque streets, Sanchez knows he’s wired for conflict a bit differently than most, but none of the outward bravado that often comes attached to “Burquenos” is present in him.

In fact, if one didn’t know otherwise, Sanchez could easily be mistaken for a Southern California product with his laid back delivery and his fresh from the beach swagger. Nevertheless, just because he may have a chill switch that can be flipped on beyond the walls of the gym, it would be a tremendous mistake to think he’s anything but an animal when it’s time to work his trade. And where that aggression was initially aimed at fellow highly touted talent Justin Scoggins at The Ultimate Fighter 22 Finale on December 11, an injury suffered at the tail end of training camp forced Scoggins to withdraw from the fight.

Fortunately for Sanchez, the UFC was able to bring Geane Herrera in, and even though his opponent has changed, the end goal of a devastating finish and a chunk of extra spending money is still intact.

“This is my time to shine and this is the fight where I do make my name,” Sanchez said. “People are going to be asking where this kid came from after they see how I perform against Herrera. I have the power and speed to knock him out, and I know he’s never been hit by anyone like me who has the type of speed and power that I do. People think flyweights don’t hit hard and I’m looking to be one of the fighters who helps change that perception.

“I’m going for the knockout in this fight because I want that bonus. I have dropped both of my two previous opponents inside the Octagon and dropped them both twice throughout the fight. I hit Tateki so hard that if it had been any other fighter besides him they would have gone to sleep. I give a lot of credit to Tateki, because I think he has a little bit of zombie in him, but I’m getting that knockout bonus in this fight for sure.”

As for that Wall of Fame that he works in the shadow of every day in the gym?

“I believe I was destined to fight,” Sanchez added. “It’s in my blood. You will see me up on the wall at our gym as one of the greatest fighters of all-time.”