Joaquin Buckley knew things had gone a little bit crazy after his knockout of Impa Kasanganay went viral last Saturday. But just how crazy, he didn’t know that until he arrived back home in St. Louis.
By Thomas Gerbasi, on Twitter: @TGerbasi • Oct. 14, 2020

Joaquin Buckley knew things had gone a little bit crazy after his knockout of Impa Kasanganay went viral last Saturday. But just how crazy, he didn’t know that until he arrived back home in St. Louis.

Despite garnering a $50,000 Performance of the Night bonus for what many are calling the greatest knockout in UFC history, Buckley hasn’t let the fame go to his head. So instead of having a car pick him up at the airport once his flight from Abu Dhabi landed, he got on the MetroLink train that leaves him within walking distance of his home. Business as usual.

But as Buckley settled into his seat, he saw two police officers looking at him. The UFC middleweight noticed his face mask was down, so he put it back on and one of the officers walked towards him.

“In my head, I'm thinking he's gonna ask for my ticket, which I didn't have at the time,” he laughed.

The officer asked where he was flying in from. Buckley told him.

“I thought I recognized you,” said the officer. “You're Joaquin Buckley.”

“I thought I was gonna have a whole different type of situation. But he was the first person to recognize me. So that was pretty different. But besides that, nothing really special has changed in my life. Not yet at least.”

That’s going to change, if it hasn’t already.

Search the name Joaquin Buckley on Google and 11.6 million results come up. On Tuesday, Kanye West tweeted out a new track set to the clip of Buckley knocking Kasanganay out. At press time, that Tweet has 22.8 thousand retweets and 88.5 thousand likes.

“That's different,” Buckley said of the Google search results. “I wouldn't expect that at all.”

It’s happening, though, even if nothing has changed for him other than a few more phone calls to field.

“Everything's been normal besides with technology and me being able to see the explosion of my following and the videos and the memes and everything of that nature,” he said. “That's crazy. But in the physical, real world, nothing much has changed.”

In fact, he’s not even planning on an extended vacation to celebrate his first UFC victory and the jump spinning back kick heard ‘round the world.

“We always take a break, regardless,” Buckley said before revealing that his version of a break isn’t what most of us would want after a professional prizefight. “I take a little three-day, four-day hiatus and get things done around the house, but then we're going back into training for sure. You gotta stay ready, so I gotta get that next big knockout.”

That’s a fighter talking, and if you know the roads Buckley took to make it to this point, it’s impossible not to feel good that he’s having this success now. A pro since 2014, Buckley paid his dues over the last six years, getting close to the big show but never getting over the hump due to losses at the wrong times. That doesn’t mean he didn’t have the potential to get to the UFC, and when it comes to excitement, you don’t even need to see the Kasanganay fight. Watch him swing hammers in his short-notice UFC debut against Kevin Holland in August and you’ll be an instant fan. When I say no one throws harder, I mean it. And on fight night, “New Mansa” makes sure it’s a fight.

“I get that from the great ‘Iron’ Mike Tyson,” he said. “That’s the mentality of fighting I have always been inspired by, to fight and punch with bad intentions and put everything into it. I also try to put footwork into my game as well where I put myself in position to fire but not get hit. I'm trying to be a showman out there. I'm trying to perform, and I just want to get the most devastating knockouts, as you've seen with the Impa fight. I'm trying to get as many devastating knockouts as I can while I'm in this business.” 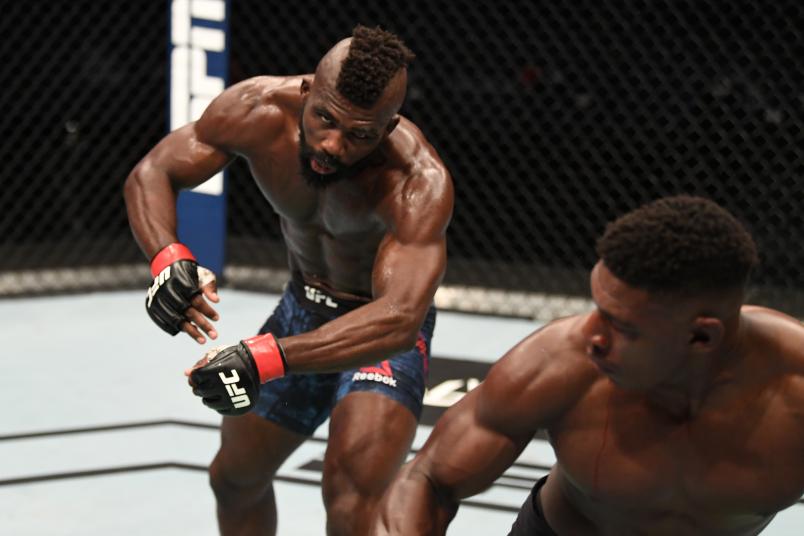 That’s not a surprise, but “Iron Mike” can’t throw a kick like Buckley did last weekend, and when he stepped into the Octagon to face the unbeaten Dana White’s Contender Series graduate, the first four fights of the night had gone to the judges’ scorecards, leaving a nice opening for Buckley to pick up some bonus money.

“When I saw my peers fight, everybody else was going to a decision,” he said. “So I wanted to be the first person to get a knockout for the event, and once I got mine, guess what, everybody else started knocking somebody out. (Laughs) So I really felt like I helped give the momentum for people to go out there and finish the fight. (When it was over, I knew) that $50,000 is really coming to me tonight and I already knew that. But I never expected for it to take storm like it did and go viral exactly how it is. It's really global right now, and for Dana White to come up and tell me what he told me, that was probably the most surreal moment right there.”

There will be more of them before any of this dies down, if it dies down at all. Joaquin Buckley is in a lot different place than he was at this time last week, and while you can’t imagine anyone lining up to fight him, he knows there will be someone aiming to try their luck.

“I know I got some people out there that think they can beat me and give me a run for my money, and I'm happy to do it,” he said. “Whoever wants to get the work, I'm glad to give it to them.”