His unbelievable spinning back kick knockout of Impa Kasanganay has racked up tens of millions of views and launched Joquin Buckley into the spotlight. With that level of attention, it’s easy to “get lost in the sauce” and feel the pressure from fans and media alike, but that wasn’t the case for Buckley.

“New Mansa” followed up his all-time great performance with another highlight-reel victory at UFC 255, knocking out Jordan Wright. That second win was a big one for the 26-year-old from St. Louis, as it silenced whispers of him being a one-hit wonder and has him ready to continue his meteoritic rise.

“It lifted a lot of weight [off me] because of all the social media and everybody expecting something crazy or phenomenal, so to get that second win, now I don’t have any pressure,” Buckley told UFC.com. “People know what I’m capable of and that’s what they should expect.”

One of the great things about Buckley’s mentality is that his expectations of himself match that of the public. He isn’t looking to get crazy knockouts to impress people; he’s just fighting the way he that he loves to fight.

On Saturday, Buckley (12-3) will make his fourth UFC appearance against veteran middleweight Alessio Di Chirico. Their bout will be on the main card of UFC Fight Night: Holloway vs Kattar, which airs live and free on ABC at 3pm ET/12pm PT.

It’s a historic event for the UFC, marking the first time that the promotion has aired an event on the powerhouse network. In addition, the event leads off UFC’s return to Fight Island and is the first event of 2021.

It’s going to be big.

And that means it’s the perfect time for Buckley to strike. 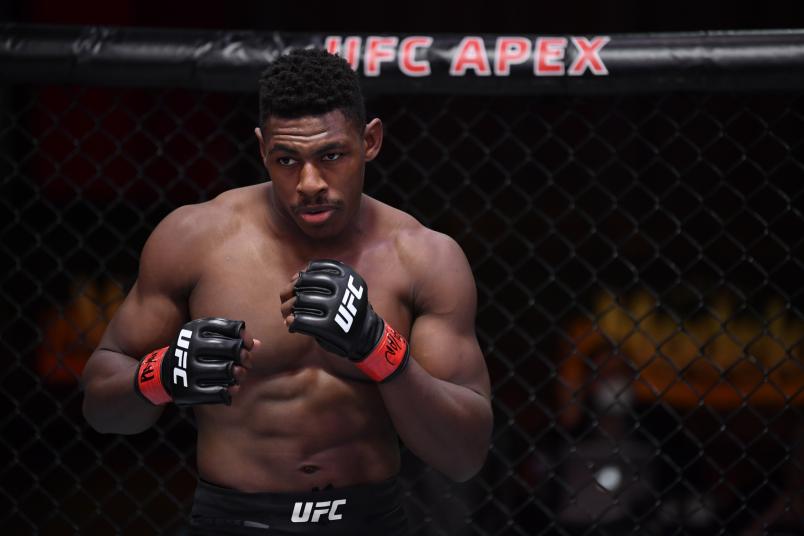 Joaquin Buckley stands in his corner prior to his middleweight bout against Jordan Wright during the UFC 255 event at UFC APEX on November 21, 2020 in Las Vegas, Nevada. (Photo by Jeff Bottari/Zuffa LLC)

“This is the biggest opportunity to do it - being on ABC, the debut, it’s a history making card within itself. So, to go out there and do what I do best, in front of the most people I’m probably going to get for right now, it’s time to capitalize on the opportunity,” Buckley said. “I think it’s actually better than being on a PPV because you have so many people watching you at one time for free. I’ve got a lot of new fans, a lot of people love exciting fights win or lose, and everybody becomes a fan. So, to be fighting on ABC and if I do what I come to do, we’re probably going to be hitting some new numbers.”

In order to hit those big numbers, Buckley is going to have to take care of business against Di Chirico, who has come up short in his last three bouts. Buckley is well aware that Di Chirico’s back is up against the wall and that the Italian is going to be more motivated than ever to get his hand raised.

The added pressure on Di Chirico is a good thing in the eyes of Buckley, and he believes that it will put him in a spot to do what he does best.

“With Alessio, I think he’s a big threat because he’s coming off a three-fight losing streak right now,” Buckley said of his opponent. “He’s fighting for his job right now but, at the end of the day, that’s just going to make for a better fight because the more pressure he brings, the more probability of me knocking him out.”

When you have two fighters on the opposite ends of the momentum spectrum, it can often make for one heck of a fight. You have a guy who desperately needs a win, and you have a guy who has all the confidence in the world right now.

That’s one of the reasons why Buckley is so excited for this fight. He understands that the fight game is full of ups and downs. And he isn’t ready to come down quite yet – not even close.

“I’m just riding the rollercoaster man, so I appreciate if you think I’m doing it pretty well. But everything that has come, I kind of dreamt of this moment,” Buckley said.

“I never thought it would be this soon, but I dreamt of being here before. It’s just visualization and seeing myself here before and making myself familiar with it.”