Joanne Wood Is On To The Next One

Joanne Wood Isn't Concerned WIth Her Past Fights, Her Only Focus Is Giving Her All At UFC Fight Night: Blaydes vs Daukaus
By Zac Pacleb, on Twitter @ZacPacleb • Mar. 24, 2022

Joanne Wood has eyed her next opponent, Alexa Grasso, for a couple years now, even if the longtime flyweight contender doesn’t necessarily remember.

In January 2020, Wood posted a tweet expressing interest in a hypothetical matchup a random Twitter user posted that tossed Wood and Grasso against one another. At the time, Grasso was still a strawweight but had just missed weight for a fight against Claudia Gadelha and issued a statement announcing her move to flyweight.

Wood hadn’t fought in about four months when she threw the idea out there. A couple years and many fights would pass until it came to fruition, but she still is just as interested as she was back then.

“At that time, I was just looking for a fight,” Wood told UFC.com. “I was throwing it all out there. She’s got an exciting style. She’s a great boxer. She’s also a strawweight coming up, so I think me and her are going to put on a great co-main event.”

If anything, the time passed has increased Grasso’s stock as an opponent. Since moving to 125 pounds, Grasso looked sharp, tallying wins over Ji Yeon Kim and Maycee Barber. The win over the latter came more than a year ago, though, so she is also still looking to establish herself in the division.

Wood is eager to get things back on track against Grasso, as well. 2021 was a mixed bag for Wood. She opened the year with a strong, bounce-back victory over Jessica Eye on Fight Island, but a close, split decision loss to Lauren Murphy followed. After marrying longtime partner and head coach John Wood – thusly dropping “Calder” from her name - she fought Brazilian upstart Taila Santos. In the first round, Santos dropped her twice before submitting her late in the first round. 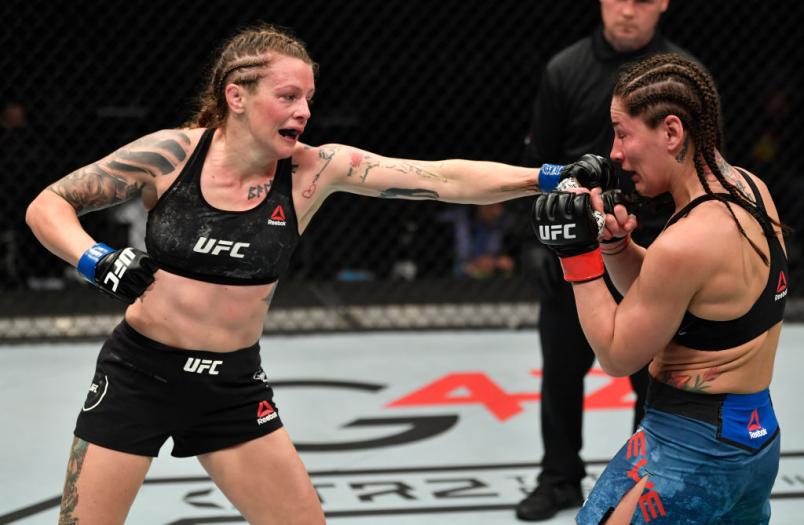 The loss to Santos was, in Wood’s words, “devastating.”

“It’s just a disappointment,” she continued. “You kind of go down a path you really shouldn’t go down, or if you go down, a couple of days and then bring yourself back up, and have good people around you to bring you back up to speed and be like, ‘It’s not the end of the world. Get on to the next one.’”

And so that’s what she did. Back into the gym at Syndicate MMA and back to facing another flyweight hopeful.

Where this matchup with Grasso is a bit different than her previous opponents is that it’s one of the first times Wood is facing a flyweight moving up from strawweight as opposed to a 135er coming down. That means she’ll feel on-par with or stronger than Grasso, an advantage Wood hasn’t really felt since her days making the difficult cut down to 115 pounds.

“I felt like everyone that’s come down (to flyweight), they’re definitely stronger and bigger than me,” Wood said. “My last opponent, she’s blessed with a great body. I do strength and conditioning, and my nutrition is good, but I guess I don’t have those good genes. Obviously, you want to go in with every advantage possible.”

Framewise, she and Grasso are virtually identical, and the general consensus is the two will put on an intricate and technical striking battle when they face off in the co-main event at UFC Fight Night: Blaydes vs Daukaus. In their 28 combined wins, Wood has the lone submission between them.

Despite the similarities, stylistic differences are present in spades. Wood’s base comes from Muay Thai, and she does an excellent job mixing up her strikes to the head, body and legs of her opponent. In the clinch, she often blasts elbows and knees. Her volume is historically high, topping the division’s all-time rankings for strikes landed per minute (7.28) and striking differential (+2.42), according to the UFC Record Book.

To Wood, however, she feels like her varied attack leaves her at a visual disadvantage, which has in turn caused judges to score fights in her opponent’s favor. She believes she’ll need to be a bit busier with her hands to Grasso’s head, a tricky prospect considering Grasso’s boxing prowess. 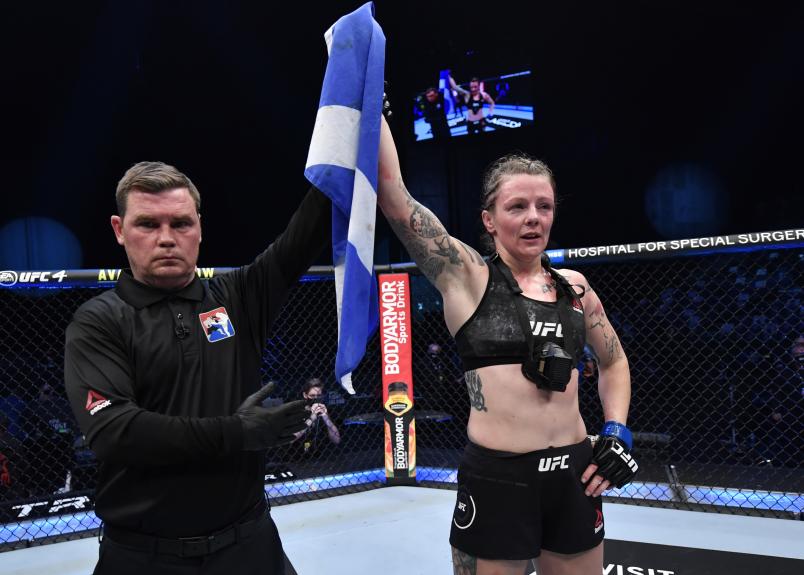 Joanne Calderwood of Scotland reacts after her victory over Jessica Eye in a flyweight fight during the UFC 257 event inside Etihad Arena on UFC Fight Island on January 23, 2021 in Abu Dhabi, United Arab Emirates. (Photo by Jeff Bottari/Zuffa LLC)

“I feel like I’m going in with the mentality of, if this does go to the judges, then I have to be more in the boxing trade,” Wood said. “I’ll still use my kicks, but I’ll have to take that into consideration.”

The fight feels a bit crucial for Wood in terms of her staying on the precipice of the title mix, but with the influx of fresher talent in the flyweight division comes more opportunities to show her quality.

Wood has also made it known she plans to take a break at some point to grow her family before returning to the Octagon. That is in the future, however, and in the present is a spotlight in which she intends to shine.

“I think that it is going to be fireworks. Also, her style of fighting, she likes to stand up. She’s very well rounded, but, I don’t know, I just got this feeling that it’s going to be a great fight, and I’m super excited to match her.”