Joanne Calderwood is okay with taking on the risks of fighting before a future title shot
By Zac Pacleb, on Twitter: @ZacPacleb • Jul. 29, 2020

Joanne Calderwood finally had her hands on a shot at Valentina Shevchenko and a UFC belt, but when Shevchenko opted to have surgery on her knee, a cloud of doubt came over the would-be challenger.

Her hunch was right, and when Calderwood learned the flyweight title bout might not happen until closer to the end of 2020, she kept on training as the world shut down due to the coronavirus pandemic. With the extra downtime, her fiancé and coach John Wood got her to watch Tombstone for the first time, which she said she enjoyed and wants to re-watch soon.

That, plus a recent kick watching Yellowstone has Calderwood imagining herself as a rancher riding a horse through Montana, and honestly, “Cowboy” Calderwood has a good ring to it.

Eventually though, she started getting itchy for a fight. That feeling only intensified as she watched her peers getting fights and moving up and down the rankings. After a little bit of debating with her team, she got her wish. Instead of waiting on the title shot, Calderwood is facing Jennifer Maia, a fight she only got word on two weeks before fight night.

“I have this killer instinct in me that can’t really come out in sparring,” Calderwood said. “I feel like that’s been playing in the back of my mind like, ‘Oh, man. I just want to let that out.’ With the fight happening and then not happening, it’s like a roller coaster of emotions, but you’re not really getting that prize at the end of the fight, so I think that’s why we took this (fight) when we heard again that she (Shevchenko) was pushing it back. I was like, ‘No. For me, for Jojo as a fighter, she has to get back in there.’” 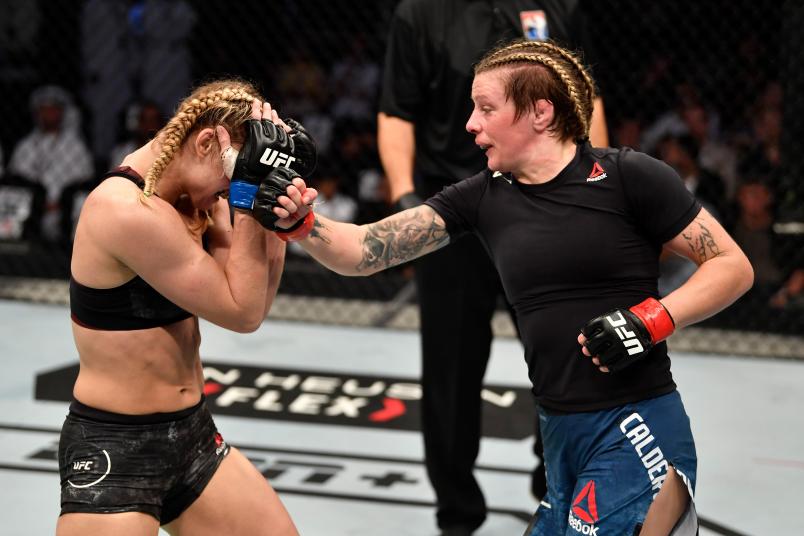 That urgency is even more understandable considering Calderwood’s busy and successful stretch from mid-2018 through 2019. After deciding to move to train in Las Vegas full-time and go up to 125 pounds, she fought four times and took home three wins, the lone loss coming in a razor-close contest to eventual title challenger Katlyn Chookagian. Coincidentally, Chookagian also fought Maia while waiting for her chance at the champ.

Calderwood’s decision to put her place in line at risk raised several eyebrows, but it’s not something she is second-guessing at all.

“Every fight is a risk,” Calderwood said. “But, for me, I feel like the worst that can happen is I lose and people talk s**t, but, at the end of the day, I’d be like, ‘Okay, I’ve learned,’ and I move on and go and get back in line. MMA is very up and down, so these risks and hurdles are meant to be sent to test us and to separate the champions from the contenders.”

For Calderwood, the opportunity to get fight time in the Octagon is something training can’t replace and getting that against a fighter like Maia makes it all the better. Maia beat Calderwood’s Syndicate MMA teammate Roxanne Modafferi in July 2019, so Calderwood does see it as a chance for some “sweet revenge,” as well.

While Calderwood might not seem like it upon first interaction, she says the desire to release tension with fighting is something that drew her to the sport in the first place back in Scotland.

“There was just this switch in me that I could flip,” Calderwood said. “If I got frustrated or something, I had this buildup inside me, and the only way I felt that I could get rid of it was punching something, or when Muay Thai happened, I could get that extra energy out of me. I had that to look forward to, and it took away my stresses and my frustrations. When I was young, there was so much pressure on me, like, ‘Oh, what are you going to do when you’re older?’ My older sister was kind of brainy. She was destined to be a math teacher, and I was like, ‘Eh, I don’t know. I like exercise.’ There was a lot of pressure but, at the same time, I hadn’t found the thing that clicked for me, and that thing that clicked for me was – at the time – Muay Thai.”

As Calderwood spent more and more of her time at the gym, her mom figured it was only a matter of time before her daughter was going to pursue the path toward fighting. While there was some nervousness when she left her job to commit full-time, there are no doubts about it now.

So, on August 1, Calderwood finally gets to scratch that fighting itch. Even though it’s not for the title, she’s not all too concerned about it. The way she sees it, the flyweight division is as open as any in the promotion, and so whether a title shot happens next or a few fights from now, Calderwood is confident in her chances. Right now, though, her focus is on Maia and she is relishing the chance to just get in and fight for the first time in nearly a year.

“Me and her stylistically makes a good fight,” Calderwood said. “I’m excited to fight her. The main thing for me is getting ring time and a little bit of cash would be nice, as well. There’s so many people struggling for work and, for me, I’m grateful I have this opportunity, and I hope I can go out there, and maybe people will go like, ‘Oh, I can’t earn right now. Maybe I’ll go to the gym and try out MMA.’ And then next thing, they’re fighting. (laughs). You never know.”