Joanne Calderwood: Going With the Flow 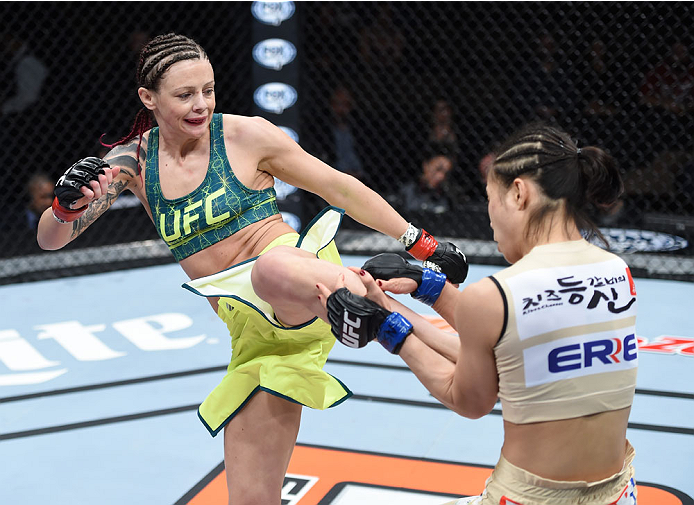 Making her UFC dreams a reality has come with some challenges for Joanne Calderwood.

Being selected as a cast member for Season 20 of The Ultimate Fighter meant that the 28-year-old from Glasgow, Scotland had to spend six weeks in Las Vegas, sequestered away from her family and friends, and the fact that the women’s strawweight division is still in its infancy has brought changes to what had previously been a pretty active fight schedule.

Over the first two years of her professional MMA career, Calderwood fought eight times – four times each in 2012 and 2013.

After a couple fights at home in Glasgow and a unanimous decision win in India, the soft-spoken, heavy-hitting striker became a regular under the Invicta FC banner, competing on four of the promotion’s five events between October 2012 and December 2013, a run that included a victory over current Invicta FC women’s strawweight champion Katja Kankaanpaa.

But it was a little over a year between that victory at Invicta FC 7 and her win over Seohee Ham at The Ultimate Fighter: A Champion Will Be Crowned Finale in Las Vegas last December, easily the longest stretch Calderwood had gone between official fights since turning pro.

“That comes as part of your career. It happened to me with Thai boxing,” Calderwood, who makes her sophomore appearance in the Octagon in the opening bout of the inaugural UFC fight card in Krakow, Poland this weekend, said. “I was really active and then eventually the opportunities (are fewer) because you get to a certain level and you’re not as active because the fights aren’t there.

“But I’m a fighter; I’m always in the gym. I do this because I love it. I love the training – the fight is just the bonus. It’s always good to be in the gym, getting better as a fighter, even if you aren’t fighting. When I’m not fighting, I’m still training, and although I’d like to stay active, everything is good.

“Everything has happened at the right time and kind of rolled into place and I’ve enjoyed every minute, although the TUF thing was a bit hard to experience,” she added. “I’m just kind of going with the flow, loving every minute.”

With the UFC having announced plans to bring an event to The SSE Hydro in Glasgow later this year, many have been looking forward to Calderwood’s participation on that card, but that hasn’t been the case for the fighter herself. Her focus has remained fixed on this weekend’s event in Poland, where she’ll share the cage with unbeaten UFC newcomer Maryna Moroz.

“To be honest, I’ve not had it in my head,” she said of the July 18 date penciled in for the UFC’s debut event in Scotland. “I don’t want to take any extra pressure into this fight. It’s more exciting that they’re coming to my hometown and it’s great for the sport, but I’m not really thinking about it. This fight is the main focus.”

Ukraine’s Moroz, nicknamed “Iron Lady,” has picked up five straight finishes to begin her career. Like Calderwood, the 23-year-old is tall for the division, standing 5’7”, and that height and her overall approach in the cage prompted the sixth-ranked Scottish competitor to seek out different training partners in advance of their meeting this weekend.

“I decided to change it up for this camp,” Calderwood, who spent a number of weeks preparing for this bout at All-Stars Training Center in Stockholm, Sweden, said. “The girl that I’m fighting is a little bit taller and I always like to make things different in my camp; change things up.

“I’m really close to my family and everyone back home at my gym in Scotland, but I think it’s good to take yourself out of that situation; it makes you stronger. I’ve got a really good relationship with my manager in Stockholm, Thomas, so I just stayed with his family for the whole five, six weeks. I had no distractions. It was good; a nice little change. Obviously, I got different training partners who were kind of more suited to the next opponent.

“I missed everyone very much and it’s made me that little bit stronger,” she reiterated. “It’s always great that you go back and appreciate what you’ve got and you can make it up to them. Plus, it gives them peace and quiet for a wee bit without me I guess.”

Given how soft-spoken and sweet she is on the phone, it’s hard to imagine Calderwood ever creating much of a commotion – that is until you watch her in the cage.

A decorated Muay Thai practitioner, the woman with a plethora of nicknames currently going by the sobriquet “Dr. Kneevil” is an aggressive, action-oriented fighter. She keeps a quick pace and swarms the opposition with a variety of strikes, brandishing sharp knees and powerful kicks. From the opening minute of Round 1 until the final horn sounds, Calderwood doesn’t let off the gas.

And while she admits that she enters this fight with Moroz without a specific game plan or expectations of what the fight will bring in mind, the undefeated up-and-comer does try to provide an entertaining performance each time out and said Saturday will be no different.

“Obviously, I’m always trying to be exciting and show different techniques and not just go in there and look for a scrap, but I’m just going to react and see what I can get when I’m in there.”