Joanne Calderwood Is All About Respect

Joanne Calderwood may be soft-spoken, but she's always willing to speak up when the time is right
By Walker Van Wey • Jun. 19, 2020

Despite being the most soft-spoken athlete on the UFC roster, disrespect the integrity of competition and Joanne Calderwood will speak up.

In the opening episode of The Ultimate Fighter 20, Tecia Torres of Team Melendez was upset by No. 14 seed Randa Markos, knocking her out of the competition immediately. Torres was given a second chance in the competition when Justine Kish of Team Pettis went down with an ACL injury. In order to balance out the teams and matchups, Torres was ordered to switch teams halfway through the show.

“It got real nasty,” said Joanne Calderwood of Team Pettis, “I knew that if you go and get girls together and put them in a house, especially fighter girls, when we’re supposed to be fighting each other and being in the same house and sharing the same kitchen, it’s bad enough having two women in the kitchen because they’re fighting over who is making what so if you can imagine having 16 of us.” 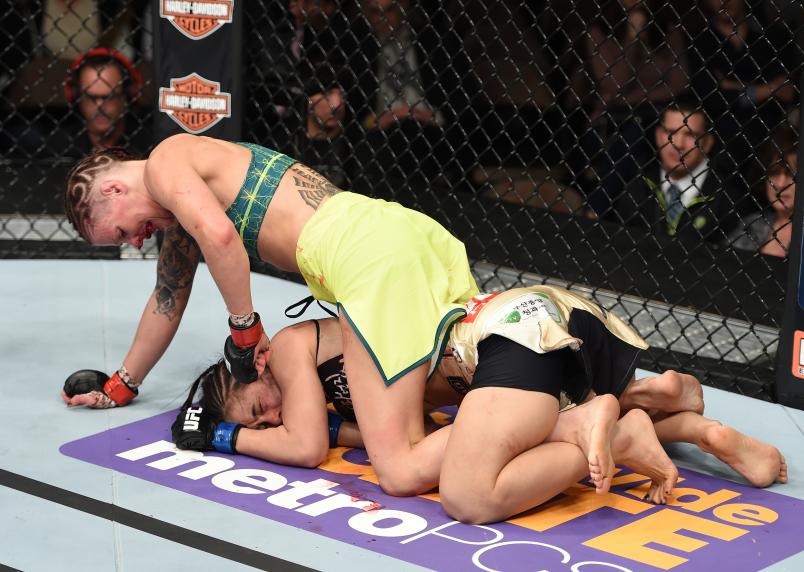 Torres defeated Rawlings by decision after two rounds and while her hand was raised, Team Melendez’s “Skrapettes” rained boos down on Torres.

While the rest of the gym seemed to just be happy it wasn’t them being harassed, Calderwood had reached her breaking point and fired back at the group of girls.

It had nothing to do with standing up to the bullies or taking one for the team. Calderwood explained that it was simply doing what was right for the integrity of the competition.

“I would have done the same if it was them,” Calderwood said. “We are professional athletes. There will be people watching this series, young girls, young guys, everyone’s looking up to the fighters and seeing how we act and it’s our job to be professional, and I did not like that. It didn’t sit well with me, so I said my piece.” 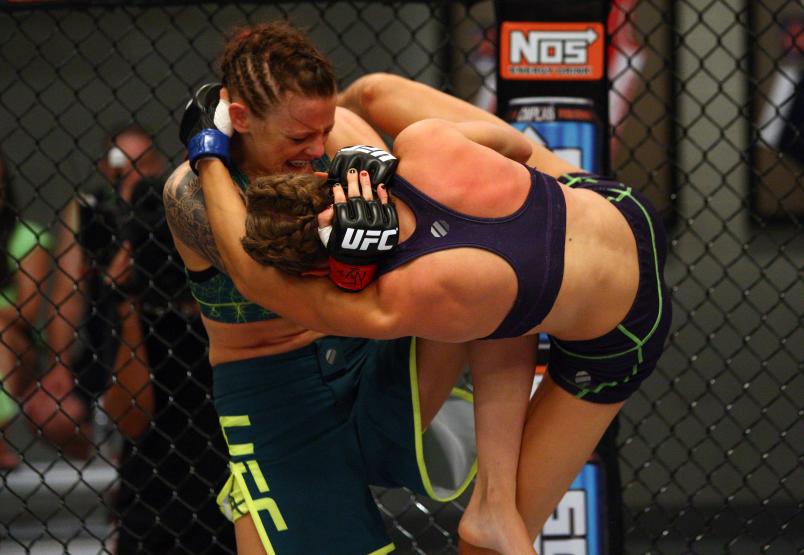 The incident was far from the first time the sect of Team Melendez ruled with tyranny. For the majority of the season they stormed through the house like tornadoes, even making victims out of their own teammates. Even when members of the group lost, the majority of the house seemed to fear the consequences of speaking out.

Calderwood never set out to “make a difference” while on the show. Aside from inserting her zero tolerance for booing, “JoJo” made a habit of keeping to herself and working hard. With only a matter of weeks to dictate the future of her career, there was little interest in wasting energy by focusing on the wrong things. Calderwood soon found a formula that kept her image intact while also avoiding making herself a victim.

“There were people worried about how their character would come out; even if they are in the right, they didn’t know how they would show it,” Calderwood said. “I think that kind of scared them a little bit into thinking they may turn out to be the villain. Just be yourself and stick to your guns and you’ll be good. Don’t act and there’s no way they can put it any other way.” 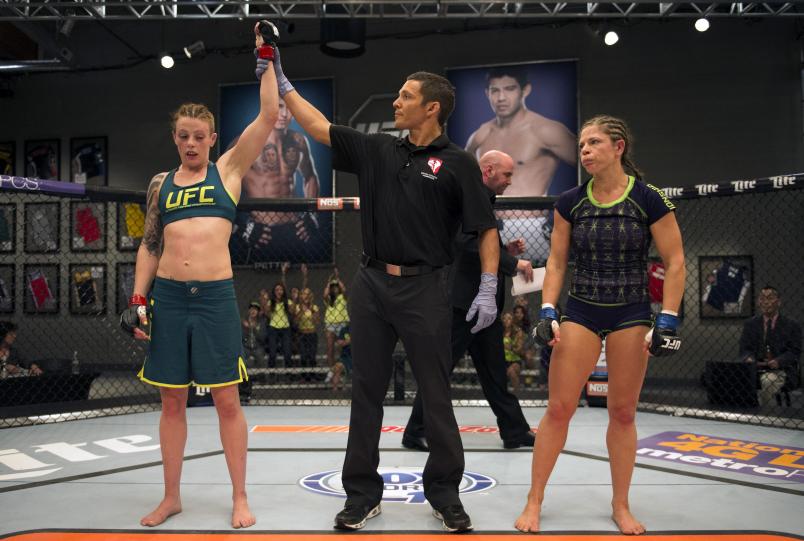 Torres thanked Calderwood for facing the “Skrapettes” on her own and condemning the jeers. It wasn’t anything personal. Calderwood and Torres were never friends before the show and weren’t training partners; it was just Calderwood’s demand for professionalism that forced her to speak up.

Had Calderwood been on the receiving end of the boos, would anybody have stuck up for her? Calderwood made it clear she wouldn’t have needed the help of words to get her point across.

“It’s not what I would say, it’s what I would do,” Calderwood laughed. “I would give them the fingers and then go, ‘Shh!’”

Calderwood’s reaction may have served a simple purpose that day, but she hopes the effect of it airing has a ripple effect for any and all athletes who look up to fighters and professional athletes. 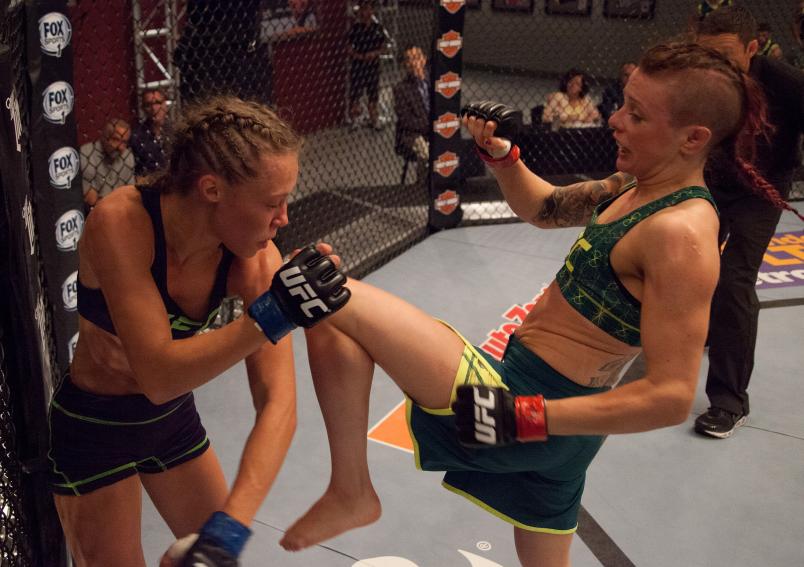 Nobody said sorry. The “Skrapettes” didn’t change their behavior, but six years later and firmly in the mix of the UFC’s flyweight division, JoJo still holds her head high with pride as she looks back on the episode.

“They laughed and I’m sure they said a lot of things behind my back, but the fact that they didn’t say any of that to my face shows that they are cowards,” Calderwood said. “Don’t be scared to say what’s on your mind, especially if it’s to stick up for someone. Even if you’re outnumbered, if other people are in the wrong, they need to know. I knew people would be watching this and I don’t want to give that bad image of being in that selected few.”

Calderwood would put on one of the best fights of the season with Team Melendez member Rose Namajunas in the quarterfinal round, but all was not lost. The Cage Warriors and Invicta FC veteran made her UFC debut later that year against Seohee Ham and with wins over Cortney Casey, Ariane Lipski and Andrea Lee, Calderwood would happily call her UFC run a success thus far. With her first title shot on the horizon, JoJo is still trending up and proud of the professional athlete and role model she has become.

With 15 of her 18 professional fights, as well as the complete TUF 20 season, UFC FIGHT PASS is your destination for all things Joanne Calderwood!