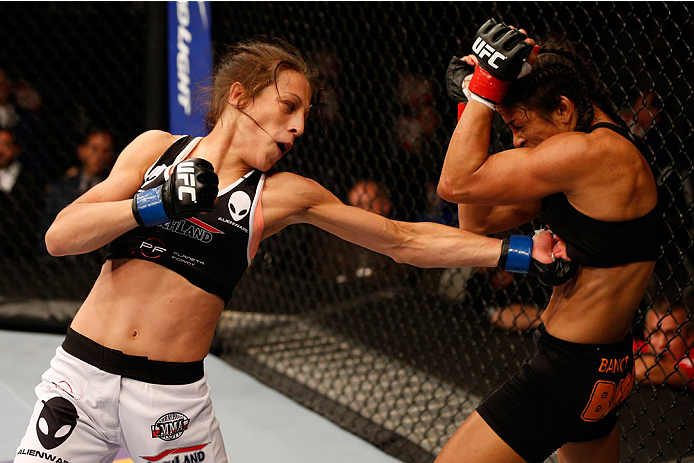 In the lead-up to Joanna Jedrzejczyk’s UFC debut in July, the question wasn’t whether the unbeaten strawweight was ready for prime time in the Octagon, but whether anyone here in the United States was going to be able to pronounce her name.

She wasn’t offended. In fact, if worse comes to worse, the native of Olsztyn, Poland has a way around it for those who are phonetically challenged.

“My family name is typical Polish and contains so many difficult letters,” she said. “But soon everyone will know how to pronounce my name. Or I can just be JJ.”

If her first UFC performance was any indication, fight fans better start figuring out how to say Jedrzejczyk, because while the pre-bout talk was about her name, the post-fight banter was all about her unanimous decision win over Brazil’s Juliana Lima. It was a dominant effort that showed off the 27-year-old’s Muay Thai attack both at range and in close, and after a heated staredown on weigh-in day that clearly saw Lima trying to gain a psychological edge, it was Jedrzejczyk who had the last word when it counted.

“I was happy that I got the chance to fight in the UFC and I just did my job,” she said. “I did hard training for Lima and I saw the fight (happening) in my mind. I was very focused on my debut against Lima and I just did my best. The UFC is amazing and I wish every fighter gets into this organization.”

One look at her first 15 minutes in the Octagon, and it’s clear that the first-time UFC jitters were no factor. As far as she’s concerned, those feelings of anticipation before the final bell just serve as motivation.

“I’m never nervous,” Jedrzejczyk said. “I love the adrenaline before the fight and it always makes me stronger. I just love to train hard and fight.”

That joy of the battle was obvious, and it apparently made an impression on the UFC brass, who not only brought her back before the end of the year, but they put her in a fight this Saturday against Claudia Gadelha that many see as an unofficial strawweight title elimination bout. That’s fine with Jedrzejczyk.

“It would be nice,” she smiles. “But I m focused on the fight with Gadelha and I want to win. If after the fight I will get chance to fight for a title, it will be awesome.”

A classic striker vs. grappler matchup, Nova Uniao’s Gadelha is a Brazilian Jiu-Jitsu black belt and a three-time world champion as a brown belt in BJJ, while Jedrzejczyk has won several Muay Thai titles as a pro and amateur. The Polish standout is confident in her ability to control the fight, but she’s not overlooking anything the Brazilian brings to the table.

“I think that she is number one in our division,” Jedrzejczyk said of Gadelha. “She has a real fighter’s soul and she is very strong. She is very good in the ground game and it’s going to be an interesting fight between us.”

In the fairly new UFC strawweight division, stars have already begun to rise in the form of Jedrzejczyk, Gadelha and Paige VanZant, but the real jolt will come this weekend, when 15 of the 16 115-pounders from The Ultimate Fighter 20 debut on Friday, with a champion to be crowned in the main event of the Las Vegas card. The next night, it’s the Jedrzejczyk and Gadelha show, and on Monday there will be plenty to talk about. But for now, Jedrzejczyk admits that with training and her daily routine in Poland, she hasn’t really kept up on her peers exploits on television.

“I’m a very busy person, training hard and doing some things in my hometown,” she said. “I’m focused on my job and don’t have enough time to watch so many fights, so I only saw one TUF episode. But yeah, this division is getting more and more good fighters and it’s going to be interesting for fans.”

It’s also going to be interesting to see how the expected success of Jedrzejczyk impacts women’s MMA in Europe, where it isn’t as big as it is here in the U.S. Jedrzejczyk admits that the reaction back home from her first win was “Normal, nothing special,” but by the same token she said that MMA is “very popular” in Poland and “getting bigger and bigger.” That’s the big picture. Personally, Jedrzejczyk has more immediate goals.

“My religion, family and friends are very important and I’m doing my job for all of them,” she said.

Now it’s time for JJ to go to work.

“I did train very, very hard for this fight and I will do my best,” she said. “I want to win this and I will do it. I hope all the fans are going to enjoy it because me and Claudia are not gonna give up. It’s going to be a good show.”