Joanna Jedrzejczyk: Losing is Not an Option 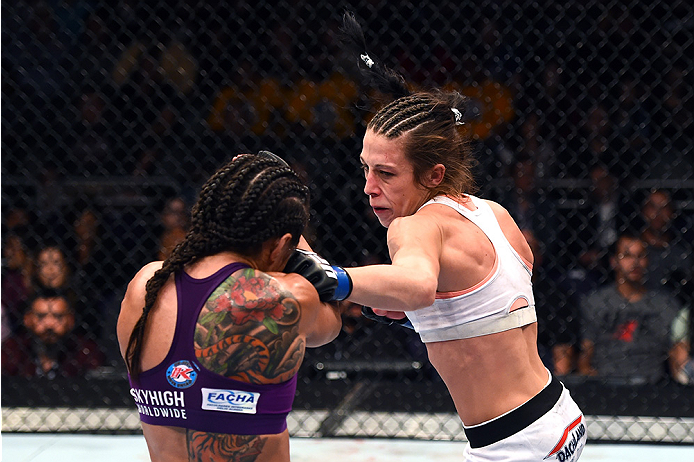 Finishing up her training camp with a trip to Los Angeles and a week in Las Vegas before heading to Dallas for UFC 185 this Saturday, number one strawweight contender Joanna Jedrzejczyk has kept abreast of the weather back in her home country of Poland, and it’s been a frosty forecast.

“It is snowing again,” the Olsztyn native said, “but spring is coming. It will come after I win the title.”

This is no mere bravado, no term lost in translation. As far as Jedrzejczyk is concerned, taking Carla Esparza’s 115-pound title this weekend is a foregone conclusion. That confidence has garnered her a legion of fans since her Octagon debut last July, and it’s led her to victories over Juliana Lima and Claudia Gadelha. And the way she sees it, those wins over top level foes and her unwavering intensity are precisely the reasons for her appeal.

“Because I’m the best,” she said. “I’m number one. Did I ever give up? Did you ever see me give up? Never. I fought with good opponents and that’s why people like me.”

Perhaps more than any other recent newcomer to the Octagon, Jedrzejczyk epitomizes what it means to be a fighter. She picks up the phone whenever the call comes to fight, she shows up in shape and on weight, and she throws down when the bell rings. As just the most recent example, she fought four times in 2014, decisioning Karla Benitez in May, knocking out UFC vet Rosi Sexton a month later, and then storming into the UFC with the wins over the Brazilian duo of Lima and Gadelha. Next up was the call for a title fight against Esparza, which basically means that Jedrzejczyk has been in one looooonnnggg training camp.

“No, I didn’t,” she laughs. “I hope I’m gonna have some holiday after this fight.”

She’s earned one, but knowing the 27-year-old, if asked back into the Octagon quickly, she would probably do it. But these are all what ifs at this point. The first order of business is beating Esparza, who looked spectacular in her title-winning effort last December against Rose Namajunas and whose wrestling-based style could give the Polish striker trouble. But when asked about the difficulties Esparza presents, Jedrzejczyk is tight-lipped.

“I don’t know what to say,” she said. “I must be focused on doing my thing in the cage, that’s all. I can say something more after the fight.”

She laughs, at ease before the most important fight of her career. That will change come weigh-in day though, when Jedrzejczyk flips the switch and turns the intensity up to 11, with her unique pre-fight staredown quickly becoming one of the most popular in the sport.

“A few years ago, I was fighting in Surinam and I was fighting with a Dutch girl but she was born in Surinam,” Jedrzejczyk said, explaining her weigh-in ritual of almost crouching down and looking up into the eyes of her opponent. “She was kind of short, and she did some trash talk about me and she said that I’m a little girl and she’s going to beat me up. So at the weigh-in I went down and just looked into her eyes. I said that I’m number one and I’m gonna beat her up. So if somebody’s trying to push me, I’m not going to give up. I’m just going to stand on my feet and look into their eyes and just do not give up. Opponents want to beat me, but I cannot let them do it.”

It’s hard to believe that a little over a decade ago, Jedrzejczyk didn’t even have designs on being a fighter.

“I started in Muay Thai and I was just enjoying the classes, training, then competition,” she said. “I didn’t expect that I was going to be a fighter, that it was going to be my job.”

It is now, and on Saturday, she could add an extra level of job security and make some history as Poland’s first UFC champion. That would make for some entrance into Krakow Arena on April 11th when the UFC premieres in Poland, right Joanna?

“I will go there with my belt.”