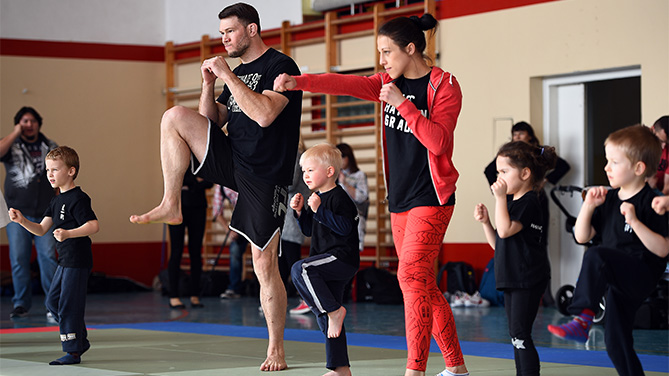 There’s something about a gym mat and a swarm of squealing youngsters donning jiu-jitsu gi’s that will turn a grown man into a little boy again – in any language.
> WATCH: Gonzaga vs. Cro Cop - The Sequel

On his second day in Kraków, Poland in advance of UFC Fight Night: Gonzaga vs. Cro Cop 2, guest fighter and UFC Hall of Famer Forrest Griffin found himself rolling on the gym floor at the Hajime School of Jiu-Jitsu on the outskirts of the city. He was absolutely covered by laughing 7-year-old Polish boys mimicking the takedown moves he had just taught them.

“This is how I know I’m getting old – one of these little guys just yanked out my shoulder,” said a beaming Griffin, who reached down to high-five one of the eager students clinging to his waist.

The eager 5-to-7 year-old students of Sensei Marcin Marek received a surprise visit Thursday from a number of international UFC stars, among them recently crowned strawweight champion Joanna Jedrzejczyk as well as Gegard Mousasi, Makwan Amirkhani and Ross Pearson. 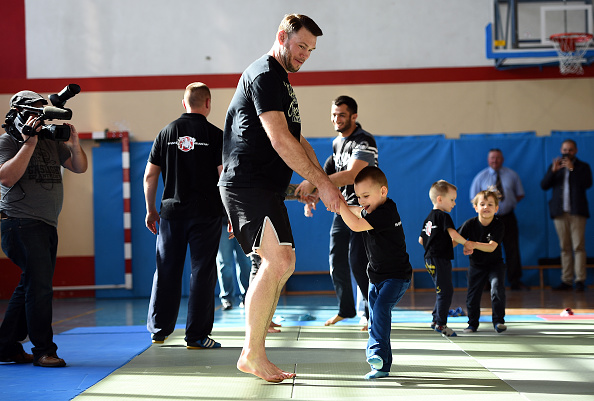 “It was a huge surprise for them, to have UFC guests visit – actually, UFC champions! -- and to have them train with my students,” said Marek, 30, who opened his Hajime Academy (www.hajime.com.pl) in 2010 and operates it at a combination middle school and high school in Kraków.

The UFC’s debut event in Poland, featuring Croatian star Mirko Cro Cop vs. Gabriel Gonzaga in a rematch of their 2007 battle at UFC 70 in Manchester, England, takes place Saturday at Tauron Arena in Kraków and can be viewed exclusively on UFC FightPass in the United States, as well as on Extreme TV in Poland and Pick TV in the United Kingdom and Ireland. Saturday’s Fight Pass prelims begin at 11:45 am ET PT/8:45 am PT, and the main card begins at 3 pm ET/noon PT.

The UFC fighters who visited Hajime Academy came armed with plenty of posters and gold Sharpies for autographs, and were immediately mobbed by the young jiu-jitsu practitioners who are helping fuel the rise of mixed martial arts in a country long known for producing brilliant standup boxers and kick boxers. 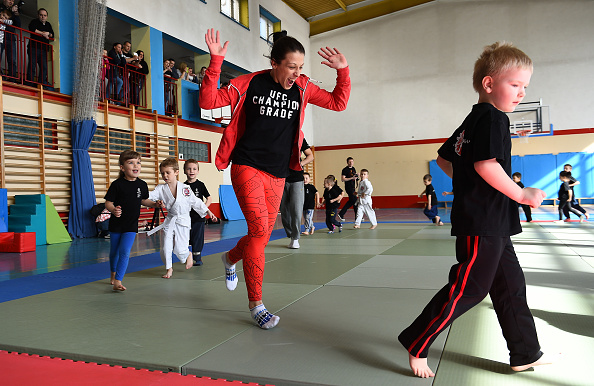 Inspired by the legacy of Pride FC, mixed martial arts in Poland has exploded in the past two decades from the popular grass roots promotion KSW (Konfrontacja Sztuk Walki, or Martial Arts Confrontation) to this weekend’s inaugural UFC event, at Kraków’s beautiful 15,000-seat Tauron Arena, which opened in 2014.

At Hajime, the three dozen MMA students watched intently as the UFC guest fighters offered a demonstration of several basic jiu-jitsu moves before joining the kids on the mat for some first-hand practice.

The youngsters were especially star struck by the incredibly popular Jedrzejczyk and her UFC belt, and she was more than happy to let the kids touch and hold her treasured championship hardware.

“This is really so cool for me,” said Jedrzejczyk, 27, a six-time Polish Muay Thai champion who captured the UFC’s Strawweight title from Carla Esparza at UFC 185 on March 14. “I love kids, and I’m so happy to come here and show the little ones a championship belt.

“They don’t know how much goes into winning a championship, how much hard work it takes, and this will help them stay excited and focused on their training.” 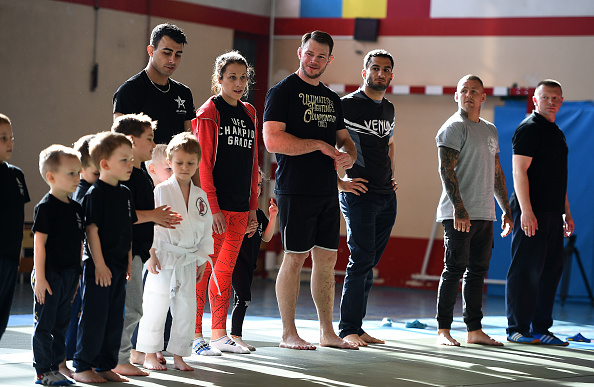 Marek, the school’s beloved Sensei, was overcome with emotion after the demonstration ended and everyone got a chance to pose for pictures with some of the UFC’s best fighters.

“I have no words to say how grateful we are that they chose us, and that they worked out with us today,” Marek said. “I’m still thinking that this is a dream! I can’t believe this is really happening. I think, after today, something will change in my life and this will be a turning point in my career. I’m sure it will mean everything to these students.”

Jedrzejczyk knows that feeling well. One of the UFC’s brightest stars, the native of Olsztyn, Poland laughed loudly as she grappled with a pair of eager 5-year-olds mimicking her strike combination.

“This is where it all begins,” she said, winking at the two boys who matched her moves perfectly. “I’m really proud to be a part of this. It’s a revolution for MMA in Poland.”