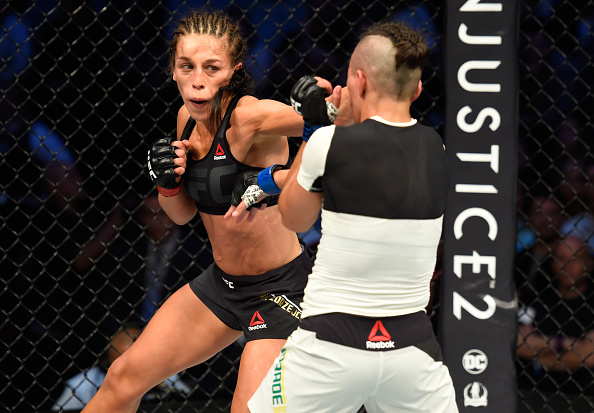 It was supposed to be Joanna Jedrzejczyk’s toughest test to date, but instead, the UFC strawweight champion put on a technical striking clinic against Jessica Andrade in the co-main event of UFC 211 at American Airlines Center in Dallas on Saturday night, successfully defending her crown for the fifth time with a five-round unanimous decision victory.

“No one is taking this belt from me,” said the champion. “No one.”

It’s hard to argue with her at this point.

Jedrzejczyk kicked off the scoring with punches upstairs and kicks to the leg, but nearly a minute in, Andrade responded with a hard left-right to the head, raising a knot on the champion’s forehead. Moments later, Andrade scored a takedown, but Jedrzejczyk got back to her feet quickly. Undeterred, Jedrzejczyk got back to work, her busy attack scoring points, even if it wasn’t slowing the Brazilian down.

Jedrzejczyk dominated the second frame, drilling Andrade with stiff jabs while throwing in leg kicks and the occasional kick upstairs as well. Andrade never stopped moving forward, but even her takedowns were brief, as Jedrzejczyk defended well.

By the midway point of the third round, Jedrzejczyk’s leg kicks were forcing Andrade to switch her stance, and the points kept piling up as she systematically broke her opponent down. To her credit, Andrade kept pressing, but her offense was being relegated to wild rushes that the champion was able to dodge for the most part.

The fourth was more of the same, with Andrade’s brief moment of daylight in the grappling game ending with Jedrzejczyk jumping right up from a takedown and going back to her crisp striking attack. As for the fifth round, Andrade kept trying to win, and she did land some shots, but Jedrzejczyk was too much for her.

The night wasn’t a total loss for the courageous Andrade (16-6), though, as she proposed to her girlfriend Fernanda after the bout and got a “Yes.”