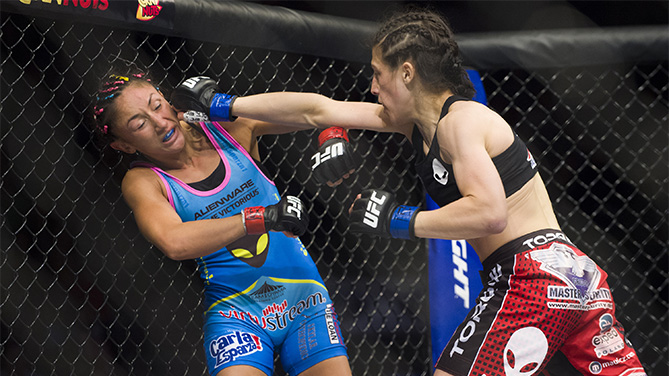 Fight fans better learn how to spell and say the name of Joanna Jedrzejczyk, because she’s not going anywhere. In the UFC 185 co-main event at American Airlines Center in Dallas Saturday, the unbeaten Jedrzejczyk became only the third European champion in UFC history and the first from Poland, as she stopped Carla Esparza in the second round to win the women’s strawweight title.

“I said I was going to do it and I did it,” the 27-year-old Jedrzejczyk, a native of Olsztyn, said.

“I fought my fight and I lost tonight,” a classy Esparza said. “She did a great job.”

Jedrzejczyk (9-0) defended Esparza’s first takedown well, adding in a strike at the end of her sprawl for effect. The second time around, the tenacious champion got the challenger to the mat, but Jedrzejczyk was up immediately. Esparza was relentless in her attack, but after another takedown, Jedrzejczyk was able to jar the Californian with a shot to the head. With under two minutes left, Jedrzejczyk began having success with her strikes and she began stalking the champion, who was winded by her early attacks.

Things continued to go downhill for Esparza (11-3) in round two, with Jedrzejczyk defending all takedowns and making her pay for each miss. Midway through the round, Jedrzejczyk looked to be on the verge of closing the show as Esparza got outclassed every step of the way on the feet, and in the final minute, she did just that, with a barrage of jarring shots bringing in referee Don Turnage to stop the bout at 4:17 of the round.

“Nobody is going to take this belt from me,” Jedrzejczyk said.

Jedrzejczyk joins Bas Rutten and Andrei Arlovski in the history books as UFC champions from Europe. 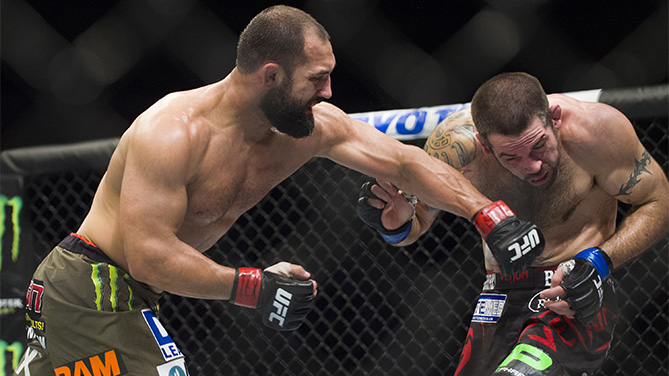 In his first fight since losing his UFC welterweight title to Robbie Lawler last December, Dallas’ Johny Hendricks went back to his wrestling roots in winning a dominant three-round unanimous decision over Matt Brown.

Brown came out fast to start the bout, with his aggression landing him on the seat of his pants thanks to a Hendricks takedown. Brown got up immediately, but in the second minute got taken down again. This time, Hendricks kept him grounded for a spell, but he wasn’t able to do much with the position, and once the two rose, Brown – although bloodied over the eye – landed some hard shots before the next takedown by “Bigg Rigg.”

After a wild scramble to kick off round two, Hendricks momentarily jarred Brown with his trademark left hand and then slammed him to the mat for the fourth time.  Hendricks scored with his ground-and-pound attack until a restart from referee Kerry Hatley with two minutes left, but Brown didn’t stay upright long, as another takedown got put in the Hendricks’ point column. After the two stood, there were some punches traded before another takedown finished off the round.

Nothing changed in the final round, as Brown had no answers for the wrestling attack of the two-time NCAA Division I National champion. And while the Ohioan was game to the end, this night belonged to Hendricks.
> Watch: Johny Hendricks Backstage Interview 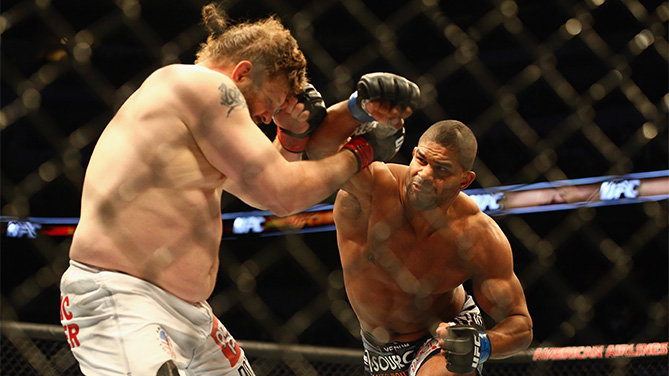 Overeem struck first with a kick to the knee and a knee to the body, neither of which stopped Nelson’s forward motion. In the second minute, Nelson got a couple shots off, but it was Overeem dominating matters from long range. Midway through the round, Nelson flurried as he pinned “The Reem” to the fence, but the Dutchman weathered the attack and got back to digging shots into his foe’s body and legs, capping off an impressive opening stanza.

After taking several more hard kicks, Nelson did score with a flush right hand in the second minute of round two, but Overeem took it well. Overeem did slow his attack down throughout the rest of the stanza, with Nelson actually outworking him in the late stages.

Following a brief break early in the third for Nelson to recover from a low blow, Overeem got a second wind and picked up the pace, and while Nelson flurried back briefly, a thudding kick to the head by “The Reem” rocked “Big Country.” Nelson did get one more shot at a comeback when he floored Overeem with a left hook, but he simply ran out of time.

Overeem, who was coming off a December victory over Stefan Struve, ups his record to 39-14 with 1 NC; Nelson, who has lost four of his last five, falls to 21-11.
> Watch: Alistair Overeem Backstage Interview 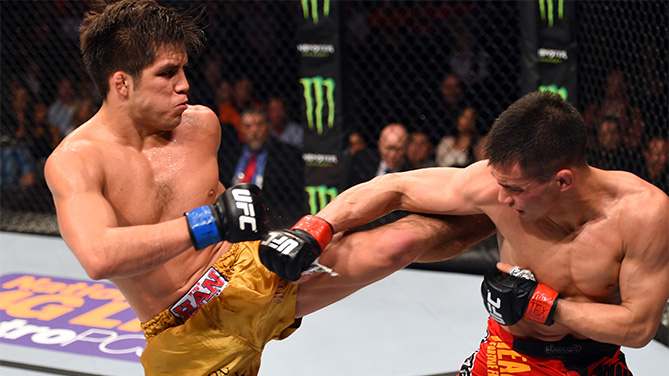 Two kicks to the body by Cariaso fired Cejudo up in the opening minute, and he took the bout to the mat briefly to unleash some ground-and-pound. Once upright, Cejudo was warmed up and on the attack, bulling Cariaso to the fence twice while landing strikes between clinches. With less than two minutes left, Cejudo dumped Cariaso to the canvas and again piled up the points before “Kamikaze” was able to get back to his feet and end the round with another solid kick to the midsection.

The pace slowed in the second, but the winner was no different, as Cejudo kept pressing on the feet and the mat, leaving Cariaso on the defensive for much of the frame, and it was more of the same in the third, as Cejudo’s relentless pressure gave Cariaso no room to breathe or get back into the fight.
> Watch: Henry Cejudo Backstage Interview