“If you’re in the UFC and you’re a top level fighter and you’ve never fought in Vegas, that’s definitely a bucket list thing to do, so I’m really stoked about it. And with the fact that McGregor is headlining it..."
By Thomas Gerbasi, on Twitter: @TGerbasi • Jan. 16, 2020

Conor McGregor may be the only native of Ireland on Saturday night’s UFC 246 card in Las Vegas, but the Irish will be represented in the night’s opener, as JJ Aldrich faces Sabina Mazo in a flyweight bout she hopes the fans from the Emerald Isle will be there and cheering for.

“I’m Irish, so it’s going to be as close to fighting in front of an Irish crowd without actually being in Ireland, so I’m really excited about it,” said Aldrich, who also gets to scratch “fighting in Las Vegas” off her bucket list, even though she technically competed twice in the fight capital of the world while on season 23 of The Ultimate Fighter.

“I didn’t get the opportunity to get to fight in the finale of The Ultimate Fighter, so I didn’t get to fight in Vegas in front of a Vegas crowd,” she said. “If you’re in the UFC and you’re a top level fighter and you’ve never fought in Vegas, that’s definitely a bucket list thing to do, so I’m really stoked about it. And with the fact that McGregor is headlining it, I know the crowd that he’s gonna bring to the show.”

Being amped up for the bright lights and the big crowd may not be what you expect to hear from the soft-spoken 27-year-old, but after 11 pro fights waged mainly in the UFC and Invicta FC promotions and a run to the quarterfinals on a reality show, Aldrich has settled in nicely when it comes to being in the spotlight.

“I’m actually very appreciative for the way I had to come up, and that way when I was brought into the UFC, it wasn’t as much of a shock,” said Aldrich, who fought four of her first pro five fights with Invicta FC. “I do feel like I still have a lot of room to grow. I’ve only had 11 professional fights, but they’ve all been on the best stages you could imagine. Ever since I was an amateur, I never fought that much locally. I was always on the road, going to enemy territory and fighting for my life. So I think with that experience as an amateur, I think that rolled over into making my pro debut in Invicta, I had a few fights there, went straight to the TUF show and then I had one fight at a local show, went right back to Invicta, and then got the call to the UFC. I think I’m very lucky and blessed because I can go in there knowing I always fought the toughest people.”

It’s why many were surprised when she was matched up with Colombia’s Mazo, a rising star who has the talent and impressive record, but not the experience Aldrich has. It didn’t come as a shock to the Colorado native, though. 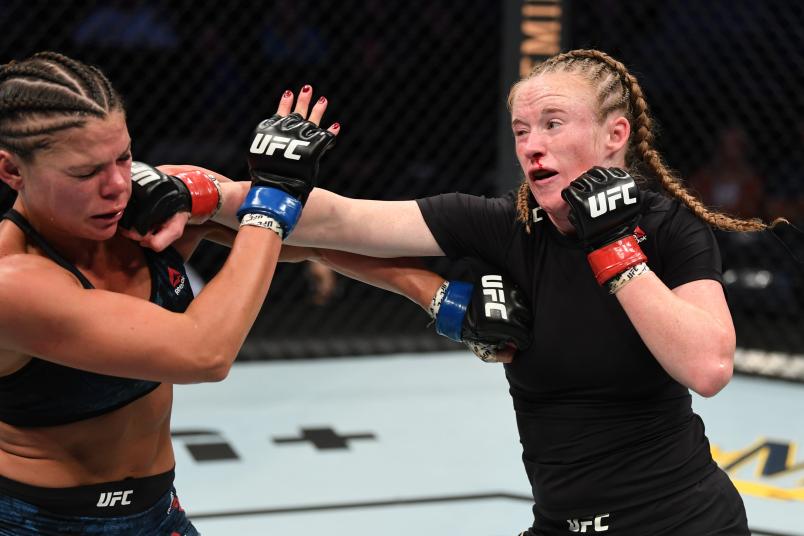 “I look at every fight as an opportunity – an opportunity to grow myself as an athlete in my ability and also the mental part. The fight game is always mental, so every fight is an opportunity. You’ve just got to take advantage of each one that you’re given. Maybe the reason they matched us up is because if you look at Sabina’s record, she fought in the LFA a bunch and had knockouts and everything else, so I think they’re really trying to push her. But while this is gonna be my seventh UFC fight, which is crazy to say that I’m turning into a UFC vet (Laughs), it’s only going to be my third fight at ’25 and she’s more established at ’25. That’s how I see it and I’m just gonna go in there and give it my all and show them why I need to be ranked after this fight.”

Fresh from an October win over Lauren Mueller, Aldrich is happy to get a relatively quick turnaround in order to keep the momentum going, and she’s all-in on taking the next step in her career both this week and in the coming months. And if she ever lacks for motivation, she can always think back to her days working in a local warehouse and the buzzer she had to ring every day to enter the facility.

“Sometimes when I don’t feel like going to the gym, I hear the buzzer, and it’s ‘Oh, you better go,’” she laughs. “I gotta keep chasing my dreams because I am not going back to that."