JJ Aldrich Is Bringing The Best Version Of Herself

After Winning Three In A Row, JJ Aldrich's Confidence Level Has Never Been Higher
By Maddyn Johnstone-Thomas, on Twitter @MaddynThomas • Jun. 2, 2022

JJ Aldrich is even more excited than normal to have a fight this weekend. She finally made it through a fight camp without having a late opponent switch, something that she went through in her last two fights.

“I was really happy to keep this one; it was someone I wanted to fight,” Aldrich told UFC.com ahead of her bout against Erin Blanchfield at UFC Fight Night: Volkov vs Rozenstruik. “She’s tough and durable and I know it’s going to bring out the best in me, so it’s someone I really wanted to fight and when they called me, I was like, ‘Yes!’ right away.”

The last time fans saw Aldrich was only 11 weeks ago, when she fought against Gillian Robertson. This weekend’s bout will be Aldrich’s fourth fight in the APEX, a place that she’s starting to consider home after how frequently she has fought there.

The 29-year-old flyweight came out victorious against Robertson, and with no injuries, she was ready to get back to work immediately. She began preparing for flyweight prospect Blanchfield, who is 2-0 in the UFC after making her debut last September.

Aldrich couldn’t pass up this fight.

“She’s very tough and she’s young. I’ve been there before. I was 23 when I was on The Ultimate Fighter, so I know how it is, but I’m excited,” Aldrich said. “I think she’s going to pull out a very tough, and probably the best, version of me that we’ve seen so far, so I’m excited.” 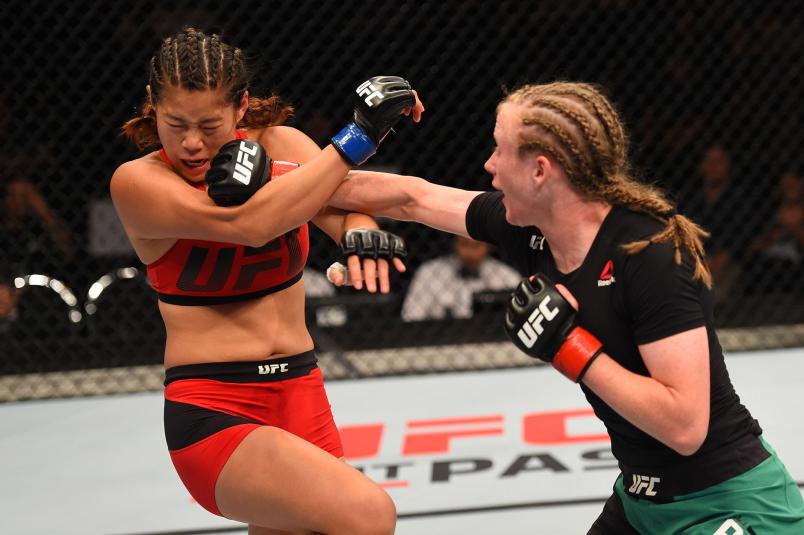 The Colorado native believes she’ll be able to attack from anywhere against Blanchfield, who has never been knocked out or submitted in her career.

Aldrich fought on The Ultimate Fighter when she 23, the same age as her opponent is now. She made her UFC debut in 2016 and has gone 7-3 since she made her first walk into the Octagon. 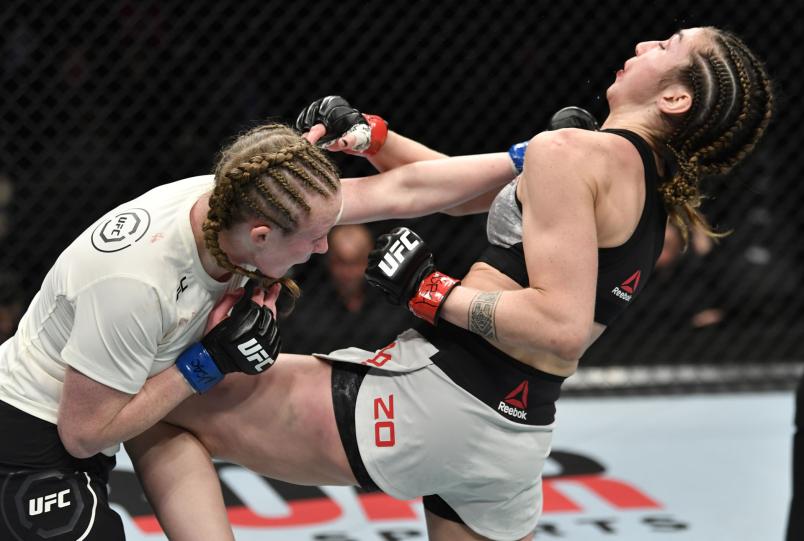 JJ Aldrich punches Sabina Mazo of Colombia in their flyweight fight during the UFC 246 event at T-Mobile Arena on January 18, 2020 in Las Vegas, Nevada. (Photo by Jeff Bottari/Zuffa LLC)

Looking back on her time so far, Aldrich has been able to see how far she has come.

“It’s crazy because I was 23 years old and I thought I was the best ever,” Aldrich said. “You just have to take it year-by-year and grow as a person and a fighter. I’m 29 and this is my 11th fight in the UFC, so I really grew up here and matured as a person and a fighter. Just being able to be at this level that I’m at now and continue to grow and continue to get better in every fight, I think it shows a lot.”

The focus for Aldrich on Saturday is bringing the best version of herself to the Octagon, which will allow her to be happy with her victory.

Not only is Aldrich coming into the matchup with a full camp, which was focused on one opponent, she’s never felt better about herself and the skills she’s bringing to the table on Saturday.

“I think I’m more confident in myself than I ever have been and that’s all it takes for me,” Aldrich said. “I know I’m the better fighter, I just have to have the confidence in myself, and I do.”