If you’re looking for Twitter flame wars and online spats between UFC fighters, you have a better chance of winning the lottery than seeing Jinh Yu Frey involved.

“People are like, ‘Why aren't you more busy on social media?’ And I'm like, ‘It would literally be the same thing posted every day.’ I lead a pretty boring life. I garden, I run with my dogs, and I train. That's about it. There's not a whole lot of different things going on.” 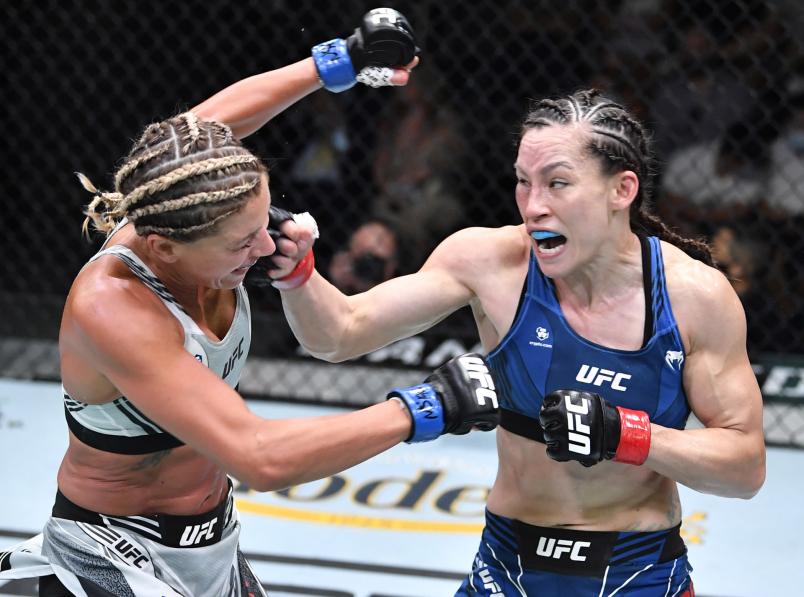 She’s more interesting than she’d have you believe. Outside her fighting career, she owns an associate degree in Nuclear Medicine, a bachelor’s in radiologic sciences and a master’s in Business Administration. Inside the cage, she’s the former Invicta FC atomweight champion and a rising UFC strawweight star. If her desire to duck the spotlight is commendable, it’s also wildly atypical for her chosen career.

“It doesn't come natural to me,” she explains ahead of her prelim-opening bout Saturday at UFC Fight Night: Tsarukyan vs Gamrot. “I'm actually kind of an introverted private person and so it does take a lot of effort for me to be like, ‘Okay, I want to share these things. I want people to look into my life and see what I'm doing in my home life.’ So, it's definitely something that I've had to work on.”

There’s a certain paradox to that. Despite moving up a weight class in a different promotion where she went from knowing the life of a champion to being unranked, the spotlight was nonetheless notably brighter. She knew that would be the case and, for a moment, she wasn’t even sure she wanted it.

“I was really uncomfortable with the idea, and my husband, he’s my biggest cheerleader, he thinks I could do anything. He just really didn't want me to lose the opportunity. He's like, ‘You’ve been a champion. You've defended it. You've reached all your goals. But what if you could go a little further?’ I think he knew that if I didn't take that opportunity that it might be something that I look back on in 10 or 15 or 20 years, or even a year later when the opportunity's passed and just be upset and regretting it.”

“At the start of my UFC career, my debut was a short notice fight and I was coming off a really serious injury and I was actually considering retiring. I didn't know if I was going to keep fighting and I just got the opportunity on six-days’ notice to go up a weight class at a time that I wasn't really even sure that I was going to continue, and also being right in the middle of the pandemic. It was June of 2020, so things were just weird.”

Her worst fears realized, she stumbled in her UFC debut to Kay Hansen.

“I went ahead and took the opportunity, and I was so nervous. I had so much anxiety going in because I knew I wasn't in great shape. I hadn't really been training because of my injury. Then the next fight leading up to it, it was double the pressure because it's like, okay, you lost your debut, you have to win, there's no other option, you have to win. It almost started to feel like more of a job, like I was putting so much pressure on myself. I was so worried about all these outside things.” 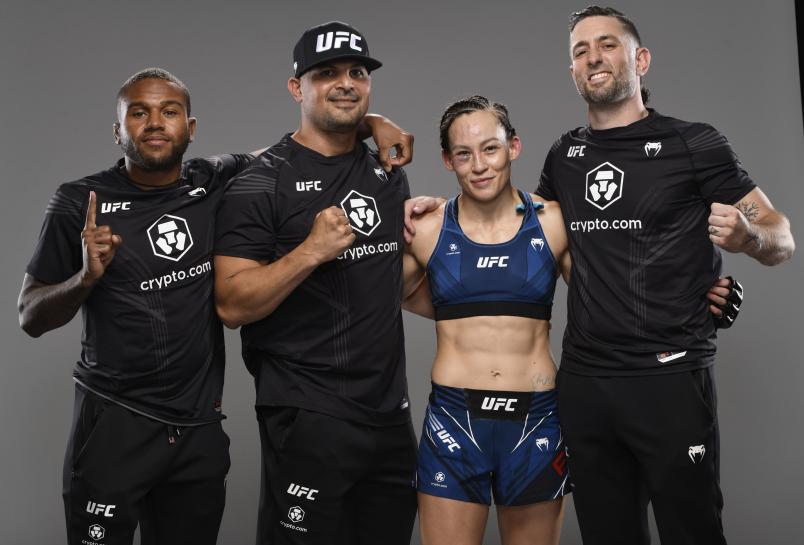 Jinh Yu Frey & Team Fortis pose for a portrait after her victory during the UFC Fight Night event at UFC APEX on July 31, 2021 in Las Vegas, Nevada. (Photo by Mike Roach/Zuffa LLC)

Her second outing didn’t go her way, either. A unanimous decision loss to Loma Lookboonmee marked the first time in her professional career that she’d suffered back-to-back losses. She wondered if her decision not to retire was the correct one.

“After I dropped that second fight, I started working with a mental coach and he really just helped me kind of reframe things in my mind and start looking at things instead of it being an obligation, it’s an opportunity. How many people would kill to be in my shoes? How many people is it their dream to make it to the UFC? So instead of me being, ‘I have to go to training, I have to get a spot tonight,’ [Instead] ‘I get the opportunity to train with high level athletes, I get the opportunity to do something I'm passionate about and make a living at my age. I'm still healthy enough to compete.’”

The approach seemed to pay off, and Frey fired off back-to-back wins over Gloria de Paula and Ashley Yoder. A move to Texas’ famed Fortis MMA in 2021 also played a part. 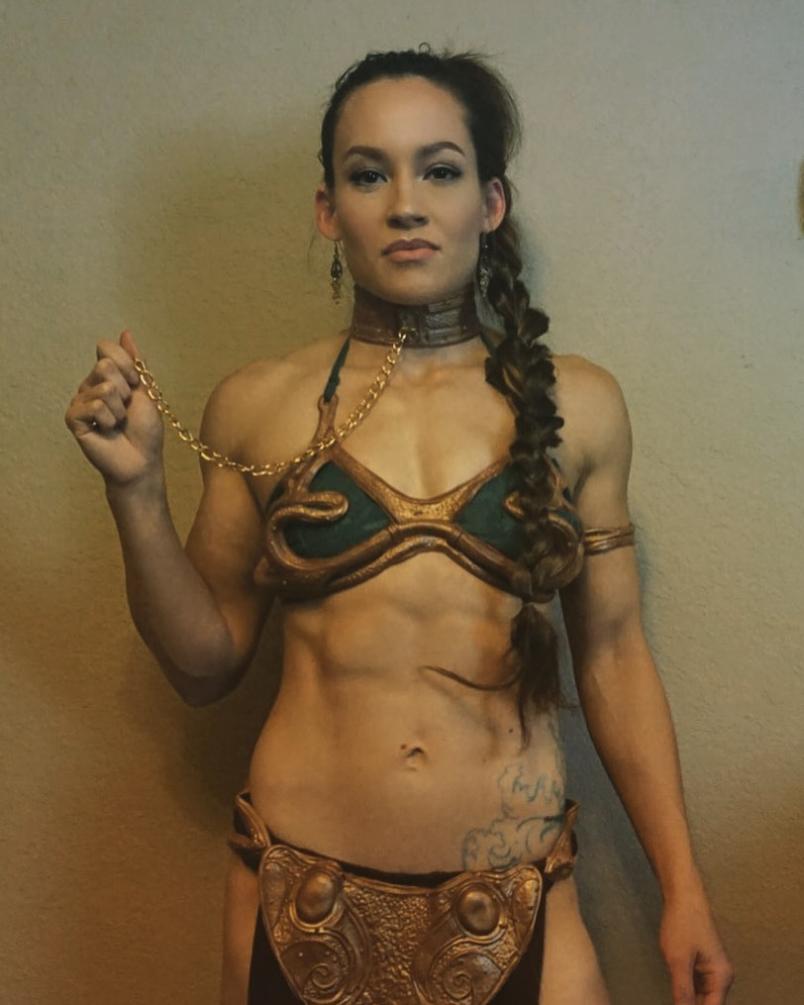 From Her Instagram @jinhyufrey, celebrating "May The 4th" as Princess Leia

She’ll draw on all that high-level expertise Saturday when she stands across from Vanessa Demopoulos at the UFC APEX in Las Vegas. Of course, she has envisioned the bout any number of times, but she’s hesitant to verbalize what she expects to happen.

“I hate to expect anything from anybody because people evolve all the time. Fights are crazy, anything can happen in a fight. She's a black belt in jiu-jitsu. She's very skilled there and I have to respect that. If things are not going her way, I do expect her to probably try to take it to her wheelhouse and try to get it to the ground where we can grapple, where she feels the most comfortable.”

Frey can feel pretty comfortable there, too. Teammate Sam Hughes called her the “best wrestler in the strawweight division” following her most recent win, attributing at least some of her victory to the time she spends training with the 37-year-old. Once again, there’s that spotlight, one that will get dialed up another notch if she can make it three in a row this Saturday. She’s not worried, though. That’s in the past.

“I try not to put pressure on myself anymore. I have my best performances when I'm just cool as a cucumber. I don't have pressure on myself that I need to do this and I have to do this. I feel like I've done the best when I worked super hard during camp and then just let the chips fall where they may come fight night.”