Jingliang believes his time is now 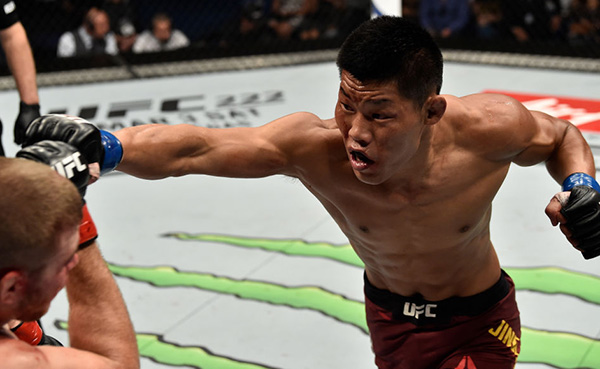 Li Jingliang of China punches Jake Matthews of Australia in their welterweight bout during the UFC 221 event at Perth Arena on February 11, 2018 in Perth, Australia. (Photo by Jeff Bottari/Zuffa LLC/Zuffa LLC via Getty Images)" align="center" />
China’s Li Jingliang has paid his dues in fighting and in life. In March, he turned 30. Now the fun begins.

“An old Chinese saying is that 30 is the year to stand up in a person’s life,” said Li through a translator. “I am married with a lovely wife and daughter now, and I want to be best the best version of myself in the coming years, to be the face of China Power, to be the best father, to love and protect my family. I will keep up my own style and I will not leave my career as a professional MMA fighter with any regrets.”

That idea of attacking life and not waiting for it to happen has translated into his fighting style, one that has led him to wins in six of his nine UFC bouts heading into a Saturday showdown with Japan’s Daichi Abe, one that many believe is a strong candidate for Fight of the Night honors. Why? Well, it’s because “The Leech” always shows up ready to throw down, with the result being post-fight performance bonuses in each of his last three bouts.

“I have nearly 10 UFC fights now, I’m getting more mature each time, and I am getting better each time,” explains Li. “Every time when I’m putting on a good show, it’s because of the experience I gained over these fights, including the losses. I don’t feel any pressure to be an exciting fighter; all I’m doing is trying to win the fight, to put on the best performance, and to get my championship in my MMA career. That’s all what matters to me. I would say this is the style I was born with.”

In 2016-17, Li evolved from a raw talent into a legitimate welterweight threat, as he won four fights in a row, three by knockout. Included in that quartet of victories was a Performance of the Night finish of Zak Ottow and a Fight of the Night with Frank Camacho. He earned another Fight of the Night bonus in February against Jake Matthews, but saw his winning streak snapped by the Aussie up and comer.

“Last time in Perth I lost the fight to Jake, but I learned a lot from it,” Li said. “I didn’t have my best performance during that fight and that’s a big lesson for me. I don’t want to make the same mistake again.”

If Li is firing on all cylinders, it could end up to be a bad night for Abe. And that’s just what Li has planned for him, as he looks to deliver another performance to remember for his growing fan base, one he is very thankful for.

“I can see that I'm gaining more and more fans and I’m very grateful for them all,” he said. “I have so many people leaving messages for me on my different social media platforms, and I’m sorry I can't reply to each one, but I saw all of them, and I want to thank them all. I also want to thank my family again, and my team - China Top Team - who are my family too. On June 23rd, I want to give everyone a great show and, of course, I want to give my fans a big win. It’s going be a good fight and I’m looking forward to June 23rd also because my team member Yan Xiaonan from China Top Team will be fighting too. Let’s see how we represent the China Power.”