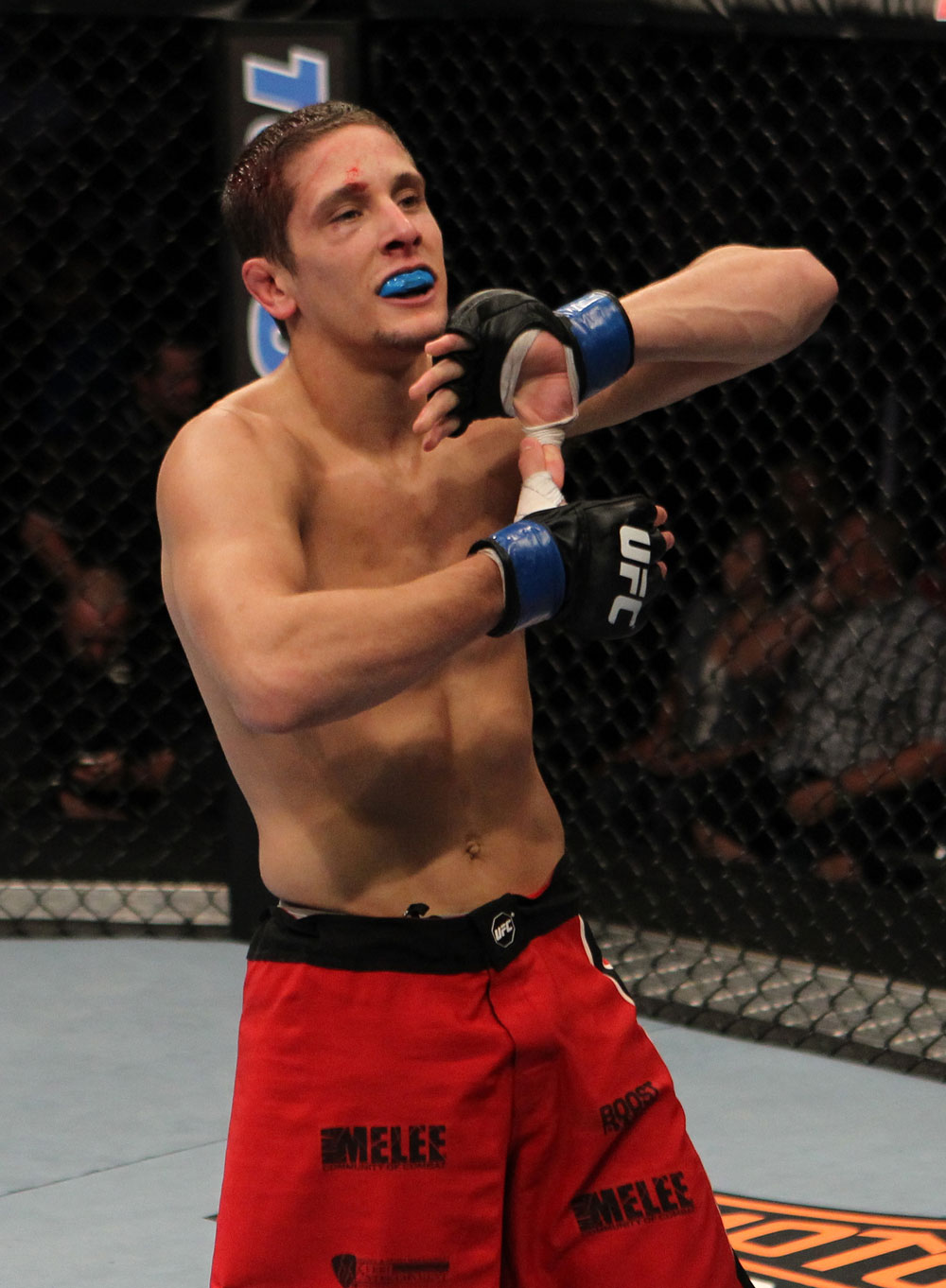 When talking about the subculture surrounding mixed martial arts that almost requires a fighter to have some sort of tattoo – or a collection of them - UFC featherweight Jimy Hettes has to chuckle.

“The thing with tattoos, by nature I shouldn’t be a fighter at all,” he reveals. “I’m afraid of needles, I’m afraid of blood, and I’m just a skinny little kid.”

A statement like that brings to mind another skinny kid who many believed didn’t belong in the fight game – Royce Gracie. But over 18 years since Gracie introduced the world to his family’s brand of jiu-jitsu, there are many disciples like Hettes who continue to break the mold when it comes to what is expected from a professional fighter.

“I really like the martial arts side of fighting and I really love learning new techniques and stuff like that, and it almost gives me an advantage because I can keep going forward and learning new techniques in every martial art with no pressure,” said the 24-year old native of Kingston, Pennsylvania, who returns to the Octagon this Friday in a main card bout against veteran Nam Phan.

It’s the second UFC visit for Hettes, who made a positive impression the first time around in August when he submitted Alex Caceres in the second round. But even though he made it look effortless, he had those first time UFC jitters.

“I tried to tell myself it was another day, another fight, and I really tried to suppress the nerves and tried to trick myself into thinking I wasn’t in the UFC,” he said. “But finally when I got there, that’s when the nerves hit me. I saw the venue and my name on the megatron, and it really hit me then.”

“At that point, it was just dealing with the nerves. The butterflies were in my stomach and I just had to let ‘em fly.”

And after getting warmed up and into his rhythm, it was business as usual, as he kept his record perfect at 9-0, with all nine of his wins coming by submission. Yeah, he’s good, real good; so good that it looks like he’s always one step ahead of his opponents when it hits the mat. Years of work in various forms of combat sports will do that for you.

“I was a big mat rat as a kid,” said Hettes. “I was doing jiu-jitsu, wrestling or judo and I just immersed myself in it. So as soon as it became time to fight, all the techniques were so ingrained in my brain that they would just flow without me really thinking about them.”

It’s kept him unbeaten thus far, and while some consider keeping that “0” an albatross; for Hettes, it’s part of the game.

“There’s always pressure in a fight, especially in a great organization in the UFC,” he said. “There’s a certain pressure that comes along with that, but you have to remain calm and just go from there.”

If anything, Hettes exudes calm in the Octagon. There is no wasted motion, no nervous energy to be burned off before he can get into his game plan. With only two and a half years as a pro under his belt, he still looks like a fighter who has been doing this forever.

“If you stay calm in practice, it translates well into the fight,” he explains. “If you’re always going nuts at practice, you can translate that into the fight as well. At practice we have a bunch of good guys and everyone stays calm, but at the same time we get excellent work.”

That work is getting even better, as Hettes has been working in New Jersey with the likes of UFC lightweight champion Frankie Edgar and former UFC standout Ricardo Almeida in preparation for Phan. Edgar is a good choice of training partner for Hettes, and not just for the obvious reasons. Before establishing himself as the best 155-pounder in the game, Edgar was looked at as the quiet underdog, a label he quickly shed when beating the likes of BJ Penn and Gray Maynard. Hettes may have the goods to follow in Edgar’s footsteps one day.

“It’s mainly his attitude toward fighting,” said Hettes when asked the biggest influence Edgar has had on his game. “Even in the gym, he never gives an inch and he’s always coming forward. What people don’t see is the mental side of fighting. He really stays on the guys he trains with, making sure everyone’s giving their all and stuff like that.”

That kind of work is invaluable, especially against a fighter like Phan, who is easily the best opponent Hettes has faced thus far. And while the Ultimate Fighter season 12 standout has focused on showing off his boxing in his UFC career thus far, Phan also has a Brazilian Jiu-Jitsu black belt, though Hettes isn’t so sure his foe is going to use it on Friday.

“He’s probably gonna want to keep it standing at all costs, and I’m sure he’ll be confident in throwing his hands because he’s got the jiu-jitsu background,” said Hettes of Phan. “And if I do get him to the ground, it’s still not gonna be a cakewalk from there. It’s gonna be hard work the entire fight.”

Hettes is fine with whatever happens when the bell rings, and he knows that at this level of the game, it’s not about a purple belt testing his ground game out against a black belt; it’s about winning a fight wherever you can.

As long as he gets the win, Hettes will be happy. Then it’s back to the gym to start all over again. It’s the fighting version of Groundhog Day, but “The Kid” wouldn’t have it any other way.

“I just always like the competition,” he said. “Every day you’re training with someone who’s been where you are or is past where you are, so it never gets boring; it’s a different experience every day.”