“In Vegas at the Contender I felt like a kid, I felt like a young boy,” Crute said. “As I said before, this is the first fight I’ve felt like a man that’s going in there with a purpose.”
By Gavin Porter, on Twitter: @PorterUFCnews • Feb. 21, 2020

Fighters often look back on a loss and think “what if?” or “I should have done this instead,” especially if it’s their first loss as a professional.

But that’s not the outlook that 23-year-old light heavyweight Jimmy Crute has after suffering his first defeat at the hands of veteran Misha Cirkunov at UFC Vancouver last September.

“It felt like I was just one or two punches away,” reflected Crute. “But f*** it. I can’t change anything about that fight now.”

The loss for Crute was almost like a reset button, as it allowed him to rediscover what drove him and helped him sharpen his focus going forward.

“I always knew that I’d take a loss well,” Crute said. “And while I was surprised at how the loss ate at me at first, I realized the only thing I can do now is keep winning fights and that’s what I’m going to do at Spark Arena.”

Crute’s confidence is warranted. The Aussie entered the UFC with bang, taking out wily UFC vets Paul Craig and Sam Alvey in his first two Octagon bouts. Wins over tough guys like that indicate that Crute is a top prospect at 205 pounds.

On Saturday, Crute will face his toughest test yet in the form of Poland’s Michal Oleksiejczuk. The two young light heavyweights will be featured in the co-main event of UFC Auckland in a bout that many believe will produce fireworks. 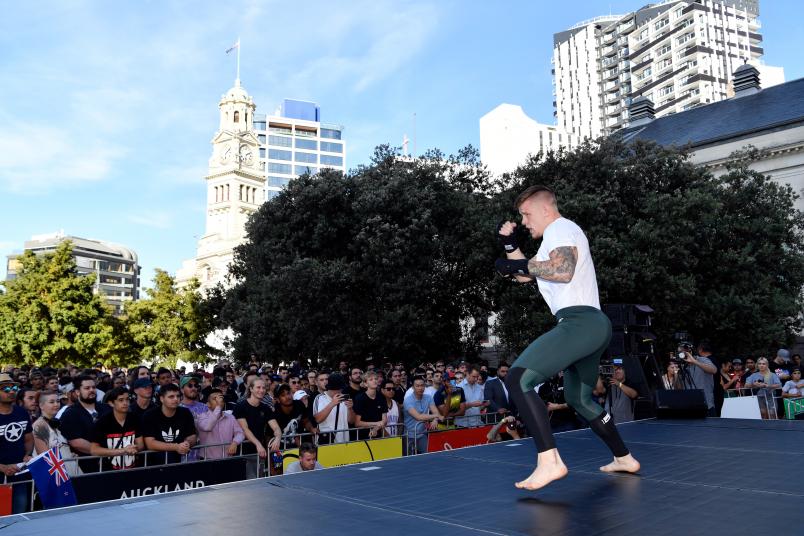 And that’s just the type of fight that Crute loves.

“He might try to put it on me, but mate, he’s going to walk into a right hand and then he’s going to back up and I’m going to go to work on him,” Crute said. “The moment he takes a step back, he submits to me...I can’t wait to light him up.”

That desire to break the will of his opponent is something that fuels Crute, and it’s part of the reason why he has been able to grow so much as a fighter since getting a contract on Dana White’s Contender Series in the summer of 2018. The biggest area that Crute has seen growth is in his mindset.

“In Vegas at the Contender I felt like a kid, I felt like a young boy,” Crute said. “As I said before, this is the first fight I’ve felt like a man that’s going in there with a purpose.”

That purpose is to be remembered as an exciting fighter and a warrior that never took a step back. Crute also has every intention to skyrocket the credibility of the MMA scene in Melbourne, as he is one of four Aussies fighting out of former UFC fighter Dan Kelly’s gym, The Resilience Training Centre.

“We have been quietly hustling for some time now. It’s Jake Matthews, Cal Potter, Ben Sosoli and I here in Auckland,” Crute said. “And we are going to put on for Melbourne and start our own takeover.”