Jimmo in Search of Excellence and 18 Straight Wins

"I think people can expect some fireworks… and another installment of The Robot." - Ryan Jimmo 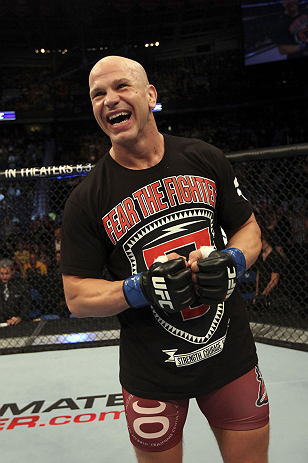 Five years and 16 consecutive wins after losing his MMA debut, Ryan Jimmo finally made his way into the Octagon.

Seven seconds later, the 31-year-old Canadian stood in the center of the cage, smiling as he broke out his patented celebratory dance, a rock-solid “robot” that ended with a full front split.

The journey to UFC 149 in Calgary, Alberta last summer was a circuitous one, as he threw hands across his home and native land in various organizations, ultimately settling in Edmonton for an extended run in the country’s premier organization, the Maximum Fighting Championship.

After racking up nine consecutive victories prior to his MFC return, Jimmo rattled off four more wins to arrive at a title shot, and then defeated fan favourite Dwayne Lewis to claim the vacant light heavyweight title. In his next two outings, “The Big Deal” defeated current Ultimate Fighter contestant Zak Cummings and former PRIDE and UFC competitor Sokoudjou by decision to run his winning streak to 16 straight.

Half of those 16 wins – including six out of seven following his return to the MFC – came by way of decision, earning Jimmo an unappealing reputation as a decision fighter; someone more interested in making sure he added another win to his resume than entertaining the fans.

It’s that reputation and string of results that made his blistering debut knockout of Anthony Perosh all the more impactful.

“I’ve nailed guys with a right hand lots of time in a fight, and lots of time in training, so I don’t know if my power was ever put into question,” offered the engaging Canadian, who celebrated his 17th consecutive victory with a cigar and a couple cold bottles of Alexander Keith’s India Pale Ale.

“I had done a lot of decisions, but because I was fighting in a different league, and if you lose in a league outside of UFC, sometimes you don’t get a chance at the UFC, so I had to fight more conservatively. It was good to be on a bigger stage where it’s worth taking the risk. In the smaller shows, if you take a big risk, if you win, it’s like `Good knockout.’ You’re going to make a highlight reel, and that’s about it.”

The streaking light heavyweight competitor explained the risk/reward assessment involved with opening up his style by combining two of Las Vegas’ staples – fighting and poker.

“It was good to be on a bigger stage where it’s worth taking the risk. If you take a big risk and you get it, you get a big bonus check.”

Jimmo did just that with his performance last July against Perosh, netting an additional $65,000 for Knockout of the Night after his near UFC record finish. Next up for the New Brunswick native is a showdown with James Te Huna, a heavy handed New Zealander who also holds a first-round TKO win over Perosh, and has posted a 4-1 record since joining the UFC roster in February 2010.

After a long journey to arrive on the biggest stage of the sport, it would have been understandable had Jimmo taken a little time to bask in his impressive debut win, but instead, the former Canadian National Karate champion opted to get right back into the gym to focus on putting forth an equally spectacular performance in his sophomore showing in the UFC.

“I started training right after my last fight. I took a week where it was a little bit easier, but I was still riding a bike, doing the right things. I’ve been back here since October, so it’s almost been like an extended camp.”

“Here” is Delray Beach, Florida, home of the Jaco Hybrid Training Center and “The Blackzilians,” the talented fight collective that includes Rashad Evans, Alistair Overeem, and fellow UFC on FUEL 7 competitor Jorge Santiago. Following a long stretch spent training in Edmonton, moving south not only offered a warmer year-round climate, but a serious upgrade in training partners and coaching.

“I’ve always had good instructors, but what are down here are superior training partners,” explained Jimmo, who stands as the lone Canadian on the team known by the portmanteau originated by Evans to describe its initial composition.

“The coaches are awesome down here as well, but I get world-class training partners down here. Before, my sparring partners were maybe an amateur boxer with two or three fights, and I would have to just work. I would have to do things like just try to hit him with jabs for a whole round or just evade and use head movement for a round; I’d have to pick out little spots and just try to work on them. Now I have guys with complete games who are better than me who can help bring me up to the next level.”

While many have talked about how this weekend’s fight card has been overshadowed by the stacked pay-per-views that bookend it on the UFC fight calendar for February, Jimmo has paid no mind to what else is happening in the organization.

Though he has an idea of the course he’d like to take to reach the top of the loaded light heavyweight division, his focus has been trained on Te Huna for some time, and won’t waver until after his hand is raised in the Octagon Saturday night inside Wembley Arena in London.

“I have a fight in 10 days. I don’t know what you’re talking about otherwise. Does that answer your question?” responded Jimmo when asked about his fight and this card being stuck between a pair of powerhouse pay-per-view events. “I have a fight in 10 days, and I don’t know about any other cards that are happening, and I’m focused on that. I don’t even know that the other things are happening. I didn’t know it was Christmas, so when you say, `Does this overshadow you?’ I don’t feel it overshadows anything because I don’t even know it’s happening.

“I just simply want to perform excellently, to the top of my ability. Afterwards we can worry about being a superstar and getting noticed. Superstars get noticed because they perform with excellence inside of the cage. I don’t know about the other stuff because I don’t think about it.”

“I have a bit of a road map,” added Jimmo, “but you can’t plan how you’re going to step off the curb a block and a half from where you’re at, you know? You put one foot in front of another, and make sure to show up for this fight. After that I can reassess my options. I have to make sure I nail this fight pinpoint on and perform very excellently, and then we go from there.”

As for predictions, the surging light heavyweight opted to keep things real simple: “I think people can expect some fireworks… and another installment of The Robot.”