Jimmo Looks to Start a New Winning Streak on Saturday 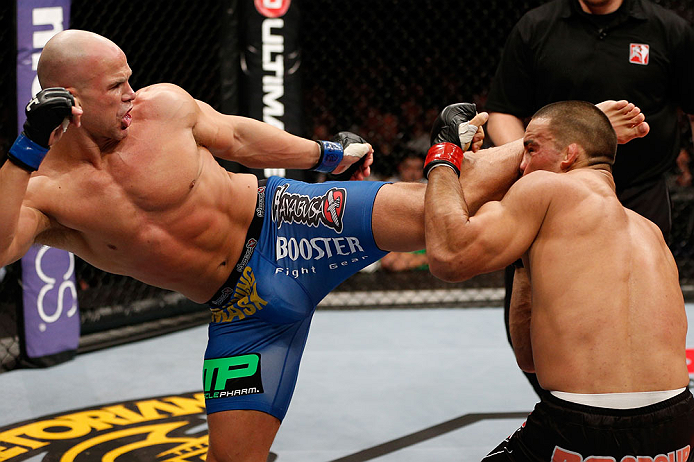 After six years and 17 winning performances in a row, including what many would call the single greatest debut in UFC history, Canadian light heavyweight Ryan Jimmo finally lost another fight. It took one of the fastest rising stars of the 205-pound division as an opponent, a superhuman recovery from a seemingly night ending head kick, a leg injury, and a grueling 15 minutes to a decision to do it, but it happened.

With that setback behind him, Jimmo is more determined than ever to give the UFC faithful a “Big Deal” highlight-ready show and many more to come.

At 31 years old, the former karate champion turned 17-2 MMA wrecking crew nearly tore a hole in the matrix in his Octagon debut last July: a seven second Knockout of the Night into a robot dance celebration into a full-split. It caught the UFC’s attention that the light heavyweight division’s new one shot sniper who likes to entertain had dispatched a seasoned fighter like Anthony Perosh so easily, so Jimmo was promoted from mid-card to main card for his next scrap. Octagon bout two was set for UFC on FUEL TV in London against New Zealand knockout machine James Te Huna, who, at the time, was 4-1 in the UFC with three wins by KO.

“When I first took the fight, I think the UFC moved me up the ladder pretty quick,” tells Jimmo. “It was only my second fight in the UFC and it was following the seven second knockout. I was expecting it to be a tough fight. I wasn't 100% healthy and I didn't have the greatest camp for that fight. I knew that if it went into the third round it would be a really hard fight and I would be in trouble because I didn't get those last few weeks to peak out and hit my cardio peak in training. I knew I wasn't quite there with my endurance. My performance didn't live up to my expectations, but I was expecting a tough fight with James because he's obviously a tough guy. My body was just not prepared for the second half of that fight like James' was and he fully took advantage of it.”

About three weeks before the Te Huna tangle, Jimmo injured his quadricep while near the end of his training camp. It limited Jimmo’s ability to work out and push himself in those last few weeks preceding the fight and he believes that’s why he gassed midway through the fight. It was a rumble that perfectly illustrated how tough these two competitors are, as Jimmo survived two rounds of pummeling once gassed as well as Te Huna overcoming that disastrous opening five minutes when “The Big Deal” nearly took Te Huna’s head off. Only a minute into the matchup, Jimmo flashed more of his lightning-like knockout ability with a quick shin to Te Huna’s forehead, which really seemed like it was the end of the fight, but somehow Te Huna rode it out.

“That left front roundhouse kick is something I've done 100 times in karate tournaments since I was a little kid,” reveal Jimmo. “I saw the opening and threw it up there, but James happened to duck into it and cause more force than I anticipated. When he went down, his eyes were googly and rolling into the back of his head. Sometimes when you're fighting, things kind of go in slow motion. When I hit, I saw him go out, but you have to keep going until the referee stops you. So I actually hit him again and he woke up. That happened twice in that first round. I could see his lights go out, so I went in to make sure the referee would stop it and I hit him again and he woke back up and grabbed ahold of me and survived it. The guy is tough as nails.”

In two Octagon appearances, Jimmo has specifically shown two fast and devastating strikes that finished one fighter and should have finished the other. Prior to the UFC, Jimmo’s aforementioned ridiculously long winning streak was heavily marked by decision victories. Many criticized Jimmo that while being UFC caliber, he wasn’t exciting enough to warrant a call from MMA’s premier league. Thankfully he did get the call because his previous conservative fighting style has gone out the window now that he’s in the big show, and he’s letting fists and feet fly for fight fans the world over.

“The risk vs. reward is worth it in the UFC for me to pull the trigger,” explains Jimmo. “Sometimes in these smaller promotions, there is a $1,000 knockout bonus. But if you take too many risks and you get caught with an overhand right and get knocked out, then you'll never make it to the UFC. I knew I had to play it safe that no stupid variable would stop my chances of making it to the UFC. Now that you're there, you can let it all hang out a little. It's time to fight. These guys are here to fight. You get rewarded appropriately. You get the proper reward to be an entertaining fighter. It's worth the risk to get that reward.”

Another change besides proper motivation, Jimmo moved from the Arctic tundra of Edmonton to the Sunny beaches of Boca Raton, Florida. At the beginning of 2012, Jimmo went looking for new management and found Authentic Sports Management with their supergroup of UFC stars like former UFC light heavyweight champion Rashad Evans, former UFC light heavyweight champion Vitor Belfort, former Strikeforce heavyweight champion Alistair Overeem, Thiago Silva, and Michael Johnson, to name a few of the fighters more commonly known as the Blackzilians. Between the mental switch of pushing himself harder because he is fighting in the UFC and training with a litany of the UFC elite, Jimmo is making the adjustments needed to become a big deal inside the Octagon.

“I also switched my camps and began training with the Blackzilians,” says Jimmo. “I had some good training partners and good coaches up in Canada, but I never got to spar with Alistair Overeem. I never got to spar with Rashad Evans. I didn't have the resources or training caliber. It's brought up my intensity as well. You usually don't get that many alpha males, that many chiefs in one room. I think what’s different with me now is a combination of these factors. Being in the new league and believing it is worth it, and having a different camp and different atmosphere.”

Up next for Jimmo is a slugging showdown on his home soil at UFC 161 in Winnipeg against powerhouse Igor Pokrajac. With an overall record of 25-9, 1 NC, the heavy-handed Croat was riding a three fight win streak until midway through 2012, including a stoppage of TUF alum Krzysztof Soszynski and a rock ‘em sock ‘em unanimous decision win over Fabio Maldonado. Since then the nine fight Octagon vet was armbarred by Vinny Magalhaes and dropped a decision to Joey Beltran, which was later overturned to a no contest. “The Duke” has shown great strength and resilience in the UFC and will need two tons of both when taking on Jimmo.

In preparation for Pokrajac, Jimmo is hard at work in Florida and coming up on a full year with the Blackzilians team. As mentioned, he is getting quality sparring sessions in with this all-star lineup of teammates like Evans, Overeem, Silva, and so on, but the Blackzilians are not joking around with their coaching either. For wrestling, the team works with former gold and silver winning US Olympic wrestling legend Kenny Monday. Also, Jimmo gets in work on the mats with the team’s original head coach and former NCAA Division I National Champion wrestler Mike Van Arsdale. As for his bread-and-butter, “Big Deal” is sharpening his striking with Dutch kickboxer Roberto Flamingo.

“Roberto's been Alistair's striking coach for a long time,” affirms Jimmo. “Good guy, great personality. He has a very different kind of style of Dutch kickboxing. A lot of Dutch kickboxing is very straight ahead, left hook then low leg kick, body shot then low leg kick, a lot of basic stuff. But Roberto's style is very intricate. Roberto relies on a lot of feints and tricks and his southpaw stuff is very good and almost like how a karate system would be. Like 10% of the time, he'll show me something and I'll be like I don't know if that works with my karate basics and my years of karate training. And we'll have to switch some stuff up. But 90% of what he shows me is very tricky and intricate Dutch kickboxing-based stuff and it works very well for my style. Roberto is very adaptable, very intelligent, and he's able to see what will work best for my style. We both work, we both adapt a little, and it's a great partnership.”

This Saturday, two light heavyweights will collide as the one and you’re done striking of Jimmo takes on the thudding force of Pokrajac. “I'm looking forward to a standup fight - that's my game,” states Jimmo, who believes his standup will be too much for Pokrajac, forcing his foe to vainly search for a takedown before it’s all said and done. “I don't think he's going to want to keep it standing for too long. He's going to want to take it to the ground. I think that's going to be the tale of the tape. I like the fact that he seems willing to stand, but we'll see for how long once we get in the Octagon.”

The last time Jimmo took a loss, it turned into 17 straight victories. With the striking “The Big Deal” has shown thus far, it could be another 17 more filled with bonus checks, robot dance moves, and entertained fans the world over.