Jimmo on the Hunt for a Big Night

"I’m a striker who can knock him out in one shot. And I’m a karate guy,
so it’s going to be easier for me to read him than it is for him to read
me." - Ryan Jimmo 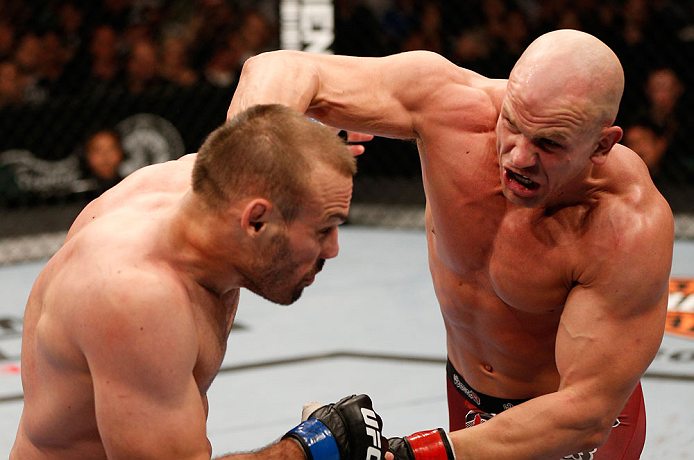 Not to be a pessimist, but the odds of Ryan Jimmo repeating his seven second knockout of Anthony Perosh anytime soon – or ever – are pretty slim. Forget catching lightning in a bottle; that’s like catching it every day for a month. And after years of competition, the Canadian light heavyweight is well aware of that.

But the thing is, when you make a UFC debut like he did with that win in July of 2012, people tend to expect a similar result every time. And when you don’t deliver, and win a fight in a less than show-stopping fashion, like Jimmo did in decisioning Igor Pokrajac in June, well, fans can turn on you.

“The contrast factor makes it seem even worse,” he agrees. “If I had been sort of boring but sort of exciting and I did this, people would be okay with it. (Laughs) But since I came into the UFC and had this spectacular knockout (of Perosh) and this spectacular knockdown (of James Te Huna in his second Octagon bout), it’s such a contrast. But it can work to your advantage too. If my next fight is a little bit of a boring fight but there’s some action, people will think it’s exciting in comparison.”

Jimmo laughs, knowing that the odds of a repeat of the Pokrajac fight are almost impossible, considering that he will be taking on British knockout artist Jimi Manuwa in Manchester this Saturday. Manuwa only knows one speed – go – and if he catches you, it’s usually lights out. Jimmo has heard all the talk about the “Poster Boy,” but believes that come fight night, he’s going to be the one with his hands raised over a fallen foe.

“He’s a big, athletic guy, but what you see is what you get with Jimi,” said Jimmo. “People see him against lower level strikers, and they’re like ‘this guy’s awesome.’ But going back to that contrast principle, they’re thinking he’s better than he really is. I’m a striker who can knock him out in one shot. And I’m a karate guy, so it’s going to be easier for me to read him than it is for him to read me.”

And there is no recklessness in the 31-year-old’s game. He shows up on fight night to win, and whatever path he needs to take to get to that goal is fine with him. It’s why he got pegged with the ‘boring’ tag on his way through the Canadian circuit, even though he readily admits to not wanting to risk his winning streak because it would mean no calls from the UFC. And when he got to the Octagon in 2012, he immediately picked up Knockout of the Night honors for his blitz of Perosh, and while he lost his second fight to Te Huna, he nearly finished his foe in the first round after a crushing head kick.

Then came the Pokrajac fight at UFC 161, and though he left the Octagon with the win, he was hard on himself for the way he scored the unanimous decision victory.

“I was disappointed that I didn’t put on a more exciting fight, but I was happy with the win,” he said. “I got the win and I was dominant in my win. It was a very one-sided fight, albeit a boring one. When I went in there with Igor, I threw some pretty heavy shots. I was trying to knock him out, but he’s a very awkward standup guy. He throws weird loopy punches and he has weird movement, and I said to myself that I knew I was better than him. I’m not going to risk losing this and getting cut from the UFC, because this would have been my second loss in a row, so I clinched him up and I took the safe, conservative route. I’m thinking long-term. I’m thinking I’ll put on one boring fight now to extend this and build my momentum back.”

Boring probably won’t be on the menu this weekend against Manuwa, and if he can get the win, it will be a nice first step forward for Jimmo and his new training teams in Arizona – Power MMA and MVA (Mike Van Arsdale). It’s the Edmonton product’s first fight after leaving the Blackzilians team in south Florida, and it sounds like he’s found a home.

“Every camp has their own little societies and beliefs that work for them, and I just didn’t have those same beliefs and the same methodology of thought,” said Jimmo. “I was more like-minded with Mike (Van Arsdale, a former Blackzilians coach), so I came here to train with him, made some connections, and decided I had more like-minded people here than in Florida. I had a nice fit with the guys (at Power MMA) as well, and I decided that was going to be one of our gyms that we kind of center on.”

Given the track record of Van Arsdale and the Power MMA boys (Ryan Bader, CB Dollaway, Seth Baczynski, Aaron Simpson, etc), Jimmo will have no shortage of top-notch training, but more importantly, what he has in his new situation is peace of mind.

“Imagine if you went to work every day and you were ten percent less productive because of some sort of outside stress factor,” he said. “And over time it leans on you a little more, and then it’s 15 percent, and then it’s 20 and it drags you down. I believe this is a better environment for me, psychologically, mentally, emotionally, and the skill is very high here as well.”

Now that’s a contrast he can live with.