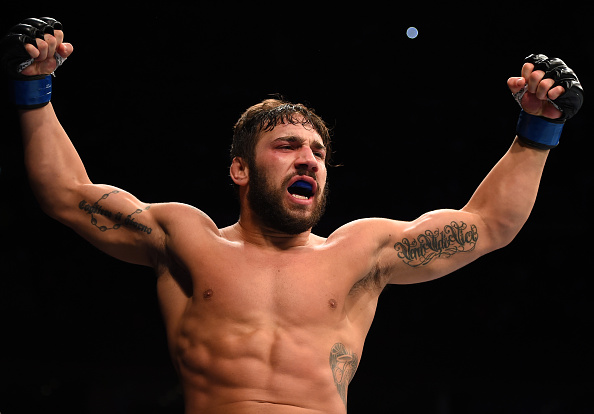 For a time, it looked like all the time Jimmie Rivera was going to spend in the UFC Octagon were the six minutes and change he accumulated during his fight to get into the house on Season 14 of The Ultimate Fighter.

After a strong first round, Rivera got submitted by fellow East Coast staple and eventual finalist Dennis Bermudez, and his dream of making it to the biggest stage in the sport was put on hold. Undaunted, he went back to the tough East Coast regional circuit and kept doing his thing, winning the Ring of Combat bantamweight title in his first fight back and successfully defending it three months later, running his winning streak to nine.

Every couple months, Rivera would add another tally to his winning streak.

He got to double digits in December 2012. Lucky No. 13 came in April 2014, but there was still no call for the guy that was making it look easy every few months to return to the Octagon.

“My coach talked to Sean Shelby and he said, ‘Get me some finishes,’” recalled Rivera, who said there were plenty of times he questioned whether he was ever going to get a second chance to step on the canvas in the UFC cage. “I said, ‘All right – I’ll get you some finishes’ and that’s what I started doing.”

In November 2014, he won the CFFC bantamweight title with a third-round technical knockout win over Anthony Durnell, the first time in nine fights that Rivera hadn’t gone to the scorecards. Six months later, he dropped fellow TUF 14 hopeful Carson Beebe in just 16 seconds to defend his belt.

“Shortly after that, I got the call and I was super-frickin’ excited about it.”

When Ian Entwistle was forced out of his bout with Marcus Brimage, the UFC called Rivera to make the transatlantic trip to Glasgow to take on “The Bama Beast,” and the eager New Jersey product happily hopped on a plane for his first fight outside of the United States and just the second bout of his career to take place beyond the Tri-State Area.

Ninety seconds into the fight, Rivera’s night was done and his winning streak was extended to 16.

“It feels unbelievable – there is no drug that could replace it,” he said of getting that first UFC victory. “Obviously it’s a great feeling to go in there, do what you love to do and get the “W” in such a short amount of time.”

After a run of eight consecutive fights in Atlantic City was broken up by an impromptu trip to Scotland for his UFC debut, Rivera’s sophomore effort in the Octagon takes place in Sao Paulo, where the 26-year-old bantamweight prospect squares off with fellow Top 10 hopeful Pedro Munhoz in the second bout of Saturday’s deep Fight Night event.

While traveling to Brazil and competing before the raucous fans that fill every venue the Octagon touches down in is a Bucket List item for many fighters, that’s not the case for Rivera. The same goes for the matchup with Munhoz.

“It’s definitely interesting to go there, but am I looking forward to going there? I’m not super-excited to go there. I like home, but this is business. I gotta go there, do my thing and that’s it; simple as that. I’m looking forward to going and fighting, but at the end of the day, I would always love to stay home and fight at home. Home is where the heart is, but you’ve gotta do what you’ve gotta do.

“I’m always excited to get in the cage – that’s the fun part of this business; getting in there and doing what you love to do in the cage – (but) honestly, I’d be more excited if it were someone in the Top 10, but this is a stepping stone to get there,” he continued, speaking about the pairing with the 29-year-old Brazilian, who enters Saturday’s contest with consecutive first-round stoppage wins and the only loss of his career coming against current top bantamweight contender Raphael Assuncao on short notice in his UFC debut.

“I think it’s just like Marcus Brimage – another person in front of me, stopping me from going where I want to go and I gotta do my best to get him outta my way.”

Having spent nearly seven years stacking up victories on the regional circuit, trying to get his chance to compete in the UFC, Rivera has no interest in sitting back and resting on his laurels now that he’s made it there. Just as he did in the years leading up to his impressive UFC debut, “El Terror” wants to keep active and keep working his way to the top, regardless of how long or difficult a process it may be.

“I’m trying to stay in here, keep fighting. You have some guys, they get in the UFC and they want to fight one, two times a year to maintain that UFC status, but I’m in here because I want the belt.

“It’s a little harder, but I’m looking forward to the challenge.”