"Once I let off my fury, I think all their plans go out the window." - Jimi Manuwa 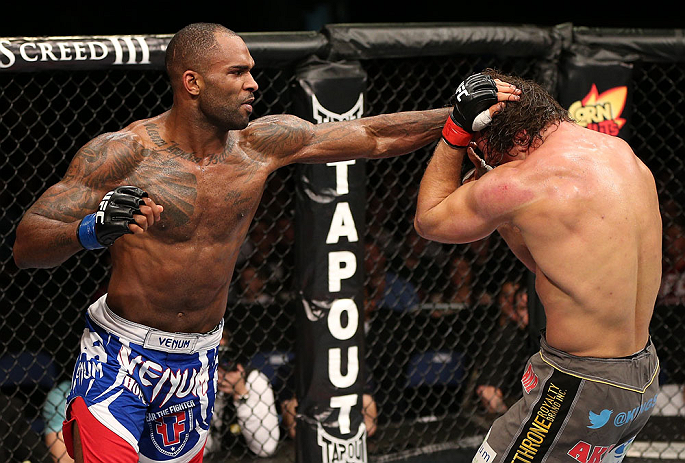 With one year in the books as a UFC fighter, unbeaten British light heavyweight Jimi Manuwa already has his next 12 months in the Octagon mapped out.

“Just expect more exciting fights as I work my way to the top with more stoppages, more excitement, more knockouts,” he said. “You could see some submissions as well.”

He laughs, not because he’s kidding, but because the idea of the London knockout king submitting people is simply not what fans expect from him. Then again, Manuwa – who finished his fourth pro fight in 2009 against Jamie Hearn via guillotine choke – doesn’t expect anything less than a knockout on fight night himself.

“The fans expect a knockout, but so do I,” he said. “I always expect a stoppage. That’s the way I fight and that’s the way I train. I train to stop my opponent with different combinations and different strikes. But I’m ready to go three rounds if I have to.”

So far, that whole going the distance thing hasn’t been an issue. 13 times Manuwa has stepped up to the plate, and 13 times his opponents have failed to hear the final bell. Mostly, it’s been the 33-year-old’s fists that have been to blame, leaving his opponents with questions they don’t have answers to, like ‘why did I want to be a fighter in the first place?’

“Once I let off my fury, I think all their plans go out the window,” chuckled the ‘Poster Boy.’

And though he hasn’t produced a highlight reel victory in the Octagon yet, his punishing two round TKO win over Kyle Kingsbury in September of 2012 showed what his fists can do. As for his second UFC victory, February’s injury-induced stoppage of France’s Cyrille Diabate, Manuwa will take the win, and the experience, even if it wasn’t the ideal ending.

“It would have been great to get the stoppage as usual, but a win’s a win at the end of the day,” he said. “I knew the way the fight was going anyway, so I think it was a good thing for him that he got injured. I think everyone could see the way the fight was gonna go, but I’ll just take experience from it from fighting a much taller fighter and a southpaw like he was.”

All in all, it’s been quite the successful first year for Manuwa, who went from local sensation to international hot prospect in the space of two fights. Today, UFC fans know who he is, and they want to see more.

October 26th is the date of Manuwa’s next bout, a Saturday showdown with Ryan Jimmo. Given Jimmo’s occasionally explosive striking outbursts and Manuwa’s ‘always on’ mission of seeking the knockout, this could be a fast and furious bout in Manchester. Or, Jimmo could look to take the fight to the mat and keep it there. Either way, the Brit will figure it out and act accordingly.

“He likes to start fast, but so do I, so it could be a big clash of the titans in the first couple minutes of the fight,” he said. “But I just read what the fighter’s like when I go into a fight; I don’t expect anything because any fighter could do anything. So I’ll just see how the fight goes and work around it.”

And if Manuwa lands one of his bombs, well, you know how the rest of the story usually goes after that.