Jimi Manuwa: No Sleep 'Til Wembley

"I can take a good shot, but not a lot of people can take what I’ve got
to give, and I think that’s what separates me from a lot of strikers." - Jimi Manuwa 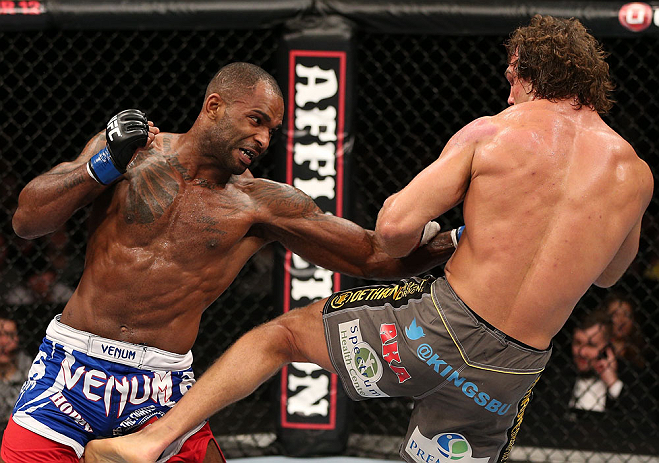 Jimi Manuwa’s world changed the second he left the Octagon after his UFC debut win over Kyle Kingsbury last September, but he hardly realized it.

“I haven’t really been out of the gym,” laughed Manuwa when asked about life after one of the most compelling UFC debuts seen last year. “Maybe on the internet I get a bit more recognition, and when I go to fight shows people congratulate me on being in the UFC and tell me that they watched the fight. But I just try to stay humble and stay grounded and just keep doing what I’m doing because I’m not satisfied with just getting to the UFC. That’s just the beginning for me.”

Watch a pre-fight interview with Manuwa

Well, as far as beginnings go, Manuwa’s was memorable. Fighting against the always tough and durable Kingsbury, the “Poster Boy” showed the power that had made him a cult hero in the UK, and though he didn’t get the clean knockout he craved, the doctor’s stoppage of the bout after the second round was a wise one, as the American suffered multiple fractures above the eye and nose.

Yeah, this guy hits hard. But as he explains, he didn’t even hit Kingsbury as hard as he could have.

“He was a really tough dude and I knew he was going to be tough,” said Manuwa. “I caught him with some good shots, but I really didn’t catch him with something that I really wanted to catch him with. I missed a few punches and stuff like that which I think would have stopped him if I had caught him. But he’s really tough and I wasn’t surprised that he took the punishment.”

The fight immediately brought to mind something heavyweight Pat Barry once said about the standup game, that most folks that fancy themselves strikers don’t anymore after getting hit by a real striker. When this is relayed to Manuwa, he chuckles, knowing exactly what Barry is talking about.

“I can take a good shot, but not a lot of people can take what I’ve got to give, and I think that’s what separates me from a lot of strikers,” he said. “I know my punches and my strikes hurt, and that’s why I’m so confident in my striking.”

That kind of punishing stopping power has always been what attracted fans to combat sports like MMA, boxing, and kickboxing, and Manuwa has it for days. Now unbeaten in 12 pro fights, with 11 wins by KO and one by submission, the 32-year-old Londoner returns to the Octagon this Saturday against veteran French kickboxer Cyrille Diabate, and once again, all eyes are on Manuwa, while his eyes are on “The Snake.”

“I see a 6-foot-6 southpaw that’s very experienced,” said Manuwa of his foe, who has won three of his last four. “He’s a good striker, has trained with Dan Henderson and Team Quest, but fight prep’s been going well. I’m training hard as usual and I know what I’ve got to do on the night.”

For such a destructive finisher, Manuwa is remarkably humble, something you would have picked up even before talking to him by remembering that before signing his UFC deal in 2012, he had turned down previous opportunities to compete in the Octagon. That was a risky call and one criticized by some, but Manuwa obviously got the last word in that department.

“I think it was the right decision to turn them down and get more experience,” he said. “I still am relatively young in my fighting career, and even my training career. I’ve only been training since 2008, and before that I didn’t know anything to do with fighting. So I have to work on a lot of things – even my striking, which is my strong point. But I’m gaining more experience, and I’m happy I made the right decision. Now it’s time to show the world what I can do, and my skills and my explosiveness.”

The Kingsbury fight was a good first showing. Now he’ll get a chance to do it again, and the way he sees it, whatever the outcome is, you won’t be asking for your money back after one of his fights.