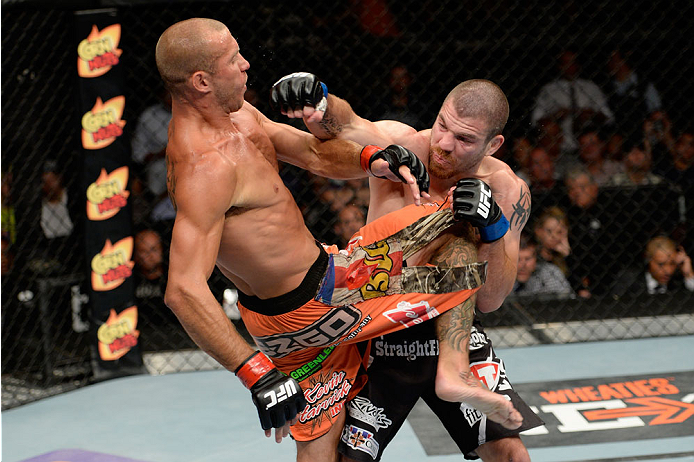 Jim Miller relishes the role of the spoiler. He doused a red hot Charles Oliveira with a first-round submission way back in 2010. He followed that up with a TKO of the surging Kamal Shalorus. Both guys showed a lot of promise for the lightweight division. Both were derailed by the Jim Miller express train.

Now he’ll have a chance to do it again against Beneil Dariush in New Jersey’s Prudential Center on Saturday night. The rising star is on a three-fight win streak and has looked more and more well-rounded with every outing.

“He’s a dangerous guy,” Miller said. “He looked very impressive in his last fight. He seems to do pretty well on his feet and he’s dangerous on the ground. It should be a fun fight. If I do what I’m capable of doing I don’t think he’s going to last. I just have to be on point.”

On point is something Miller has been for much of his career. Yet coming off his first knockout loss of his career against Donald “Cowboy” Cerrone last July, Jim is looking forward to getting back in the win column and spoiling any plans Dariush might have of climbing the lightweight ranks through Miller.

“It’s a role I’ve played before and I don’t mind playing it again,” says Miller. “I’ve made a career out of fighting the toughest guys I could. Everybody I fight I take very seriously. I am always hoping to fight the best guy out there. I train to be the best and I come in and try to fight my fight.”

Dariush is stepping in on short notice after Miller’s original opponent Paul Felder suffered a knee injury. The Iran native took the fight after earning a Submission of the Night bonus last month against Daron Cruickshank. Now he and Miller will fight in the top preliminary bout on FOX.

At age 31, Miller has about as many fights on his record as years on his life. To adjust, the 12th ranked lightweight says he’s slowed down the pace a bit, and marvels at his last opponent’s ability to take as many fights as he can.

“Cerrone is a good kid and a talented fighter,” he said. “He’s got stones. He hops into these fights and he’s capable to fight at that pace still. That’s being in training camp year round. I can’t fight at that pace anymore. I have been pretty lucky coming out of a fight completely injury free and able to fight a couple weeks later but those days are over. It’s fun to see though. It’s something I did early on and it’s something my brother Dan did too, taking fights on short notice. I’m rooting for Donald.”

Despite suffering the first knockout loss of his career against “Cowboy,” Jim says he isn’t too disappointed with his performance, but he would like to set the record straight on the second round “low kick incident” during that fight.

Miller said Cerrone hurt him in the very first exchange of the fight with a well-placed knee, and it was a kick directly to the bladder that dropped him. Referee Dan Miragliotta called it a low blow and intervened when Cerrone went in for the stoppage.

“You come into a fight and things happen,” he said. “I won the first round on the judge’s cards. Even being hurt I was doing well. I was taking damage and I was in a lot of pain but I was still beating him. The only thing that was disappointing about the fight is that I got my character called into question. He kicked me in the bladder and I dropped, and the ref called it a low blow. If people had been listening to what was happening in the cage they would have heard me correct the referee. It was said that I faked a low blow and that’s the disappointing thing, that my character was called into question.”

If Miller sounds perturbed, that’s because he is, and that does not bode well for Dariush come Saturday night.

“It should be a fun fight,” says Miller. “He and I match up very well. This fight could go anywhere but I’m confident I will go in and get the stoppage. I’m a guy who doesn’t like winning by decision. I don’t need someone else to tell me when I’ve won a fight.”