"I like to fight guys who I have this level of respect for. It's going to be a fun night." - Jim Miller 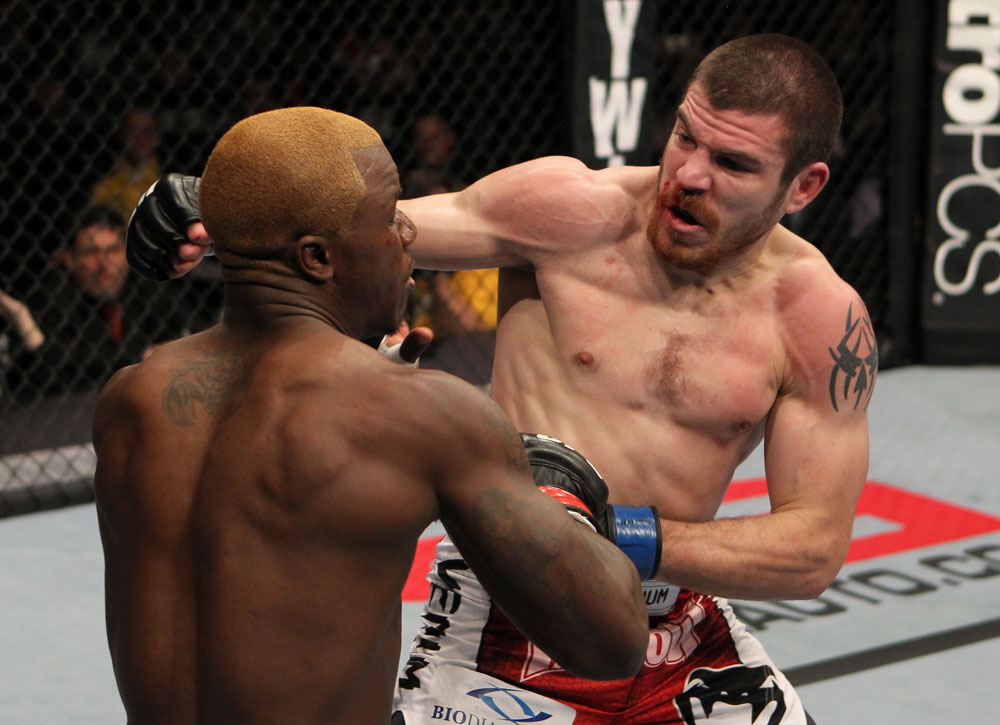 While a golden lager birthed on the streets of Mexico has given us “The Most Interesting Man in the World”, among the UFC’s shark infested lightweight ranks there is a red-bearded ruffian born and bred in the super suburbs of New Jersey who very well could be “The Most Well-Rounded Man in the World”: Jim Miller.

If you find yourself at the 21-4 fighter’s home, it’s a safe bet that whatever you see, eat, or touch has been a personal project of Miller’s. The food? He cooked it. The vegetables? From his garden. The bread? From his oven. The meat? Hunted it. The fish? Caught it. The beer? Home brewed. The wine? Home vinted. The chair you’re sitting on, he made it last year, but he put a fresh coat of stain on it yesterday because he had some free time. Everything from carpentry to automotive repair to anything else one can think up, Miller is ready and able to do it now or willing to learn and do it the first chance he gets.

Basically, Miller doesn’t always _____, but when he does, he prefers to do it himself.

It is more than being a hobbyist for Miller because he is never satisfied with just doing it; he wants to be good at it. What originally drove Miller to take on new pursuits like welding were a natural curiosity and a desire for self-sufficiency. Now, the 29-year-old is a father of two and would like to pass down this legacy of practical knowledge and handiness, as well as inspire the same passion for learning that Miller clearly has.

“In all the things I do, the first and foremost is always a father,” tells Miller. “That's my main role on this Earth. I'm a father first, husband second, and everything else is coming after that. A lot of the things I do, I just like to learn. I like to try new things and like to figure things out. A lot of these things are things that I can teach my children. I can prepare them for anything. To have them not only go through life, but to thrive. My biggest goal is to make sure they're capable people.”

The goal to be versatile everywhere is no better illustrated than watching Miller fight. Inside the Octagon, Miller is an incredibly impressive 10-3 and, at one time, was riding a seven fight win streak in what many believe is the most talent rich division in the UFC. From Submission of the Night wins over Melvin Guillard and Charles Oliveira to vicious striking displays like the TKO of Kamal Shalorus to gritty grinding decisions against Mac Danzig and Matt Wiman, there isn’t a scrapping style or a facet of the fight where Miller isn’t dangerous. He’s the Brazilian jiu-jitsu black belt people don’t want to stand with, an aggressive Muay Thai striker people don’t want to take to the ground, and Miller grew up wrestling.

In essence, Miller is the epitome of a well-rounded cagefighter.

“I sure as hell try to be,” asserts Miller. “I like to learn new things outside and inside the gym. I'm just trying to build on the things that I have and be more dangerous. That's what is so great about this sport and what drew me to this sport, you're never done. You're never done learning. It's not just run, catch, throw. There is always more technique to learn. To get enough reps in to perfect even a dozen techniques is difficult to do in a career, so it's a matter of trying to get it all in. That's really what I enjoy. I love learning new techniques and I love playing around with them. I really want to be well-rounded and I'm never going to be satisfied. As much as I try and as much as I train in my life, the way I look at it, I'll never be as technical and as well-rounded as I would like to be.”

At the end of the day, a fight is a fight, and sometimes no matter how well prepared or ready to battle one is, the unpredictable can derail all that hard work. In his most recent Octagon outing, Miller took on The Ultimate Fighter season 5 winner Nate Diaz in the main event of UFC on FOX in Newark, New Jersey. In his first and only stoppage loss, Miller was tattooed by a two-pronged attack of a freak leg injury and a helluva good wallop from the top lightweight contender.

“Nate, you have to fight him solidly basically,” explains Miller. “You can't give him any opportunities to gain momentum. I thought I was doing a good job of that in the first part of the first round, but then a couple things went wrong for me. I tore a muscle in my lower calf and then as I came in on one of the exchanges he met me with a beautiful straight left hand that rang my bell. It had me seeing stars for quite a while after the fight as well. I tried to suck it up and tried to keep going in there and going after him. I felt like I didn't really recover between rounds and I think he noticed that and really put pressure on me in the second and got me in trouble.”

Certainly a disappointing outcome, but there is always something to gleam from each Octagon appearance. “I had a lot of time leading up to the fight and used my time better in the gym and broke it down a lot better than just going in there and getting the crap beat out of me for 12 weeks,” says Miller, who believes he was in his best shape cardio and fitness wise for the bout with Diaz. “That first round with Nate, I think that was the most energy I've used in a round of any fight and I felt fine between rounds and was barely breathing heavy, even though my nose was pushed around a little bit. We definitely prepared for that one pretty much perfectly if you asked me. I'm going to carry that over into my other fights and prepare more like a professional athlete and less like a tough guy going in there to fight.”

Up next for Miller, a tangle at UFC 155 with another lightweight sniffing around a title shot: Joe Lauzon. Originally, Lauzon was scheduled to fight Gray Maynard before a knee injury forced the former TUF housemate to withdraw. The 28-year-old with a professional record of 22-7, including a mind-boggling 11 UFC Fight Night bonuses, Lauzon is an equally distressing multi-dimensional threat of an opponent, with all of his wins coming by some form of finish. Lauzon likes to strike with crisp, clean boxing and follow his foe to the floor with slick submission wizardry, which should mean this bout will be an endless frenzied attack no matter where it goes.

“Coming off a loss, I wanted a big name and I wanted a tough fight,” reveals Miller. “I wanted a fight that would get me back at the top of the card in a tough fight to fight even better contenders. Joe has definitely solidified himself as one of the top lightweights, so it is an exciting fight for me. Joe is one hell of a fighter and I'm a big fan of watching his fights. I really like the way he approaches fighting, so it is really cool because I like to fight guys who I have this level of respect for. It's going to be a fun night.”

There are a lot of parallels between these fighters: dynamic striking and grappling, the majority of wins by submission, neither talks trash, a lot of mutual respect for each other, both entering the UFC cage for the 14th time, and so on. Even their own ground game (offensive, attacking) and those of their respective coaches (methodical, position oriented) are comparable. For Lauzon, the immovable object to his unstoppable force is Pedro Sauer black belt Ricky Lundell. For Miller and the rest of the AMA Fight Club in Whippany, New Jersey, the head BJJ instructor is Renzo Gracie black belt Jamie Cruz.

“I think Joe and I have a very similar style that works well for us,” affirms Miller. “It's a basic aggressiveness. My instructor Jamie, his style is more of a pressure and methodical type game, so I have that in there. It is something that I do revert back to and go to, but a lot of my style has been combating that, someone who is looking to pass and slowly hook your arm and then eventually take something. I have found the best way to go after that is to attack, attack, attack. It's cool to have both of those in my repertoire. To be able to do a tighter game and more technical game and then also have that scrambling ability. It is something that I try to use and bounce in between in a fight to catch people off guard.”

As far as standup, Miller works with two striking coaches in Nick Avalos and Muay Thai living legend Kaensak Sor Ploenjit. “My striking has evolved a lot, it's been evolving a lot,” says Miller, who has had notable striking performances like the one against Shalorus, but to Miller that was only the tip of the iceberg. “I'm actually pretty frustrated that I haven't been able to really show it off in the last couple fights. It's kind of like you're working on a technique and it's just not quite ready to throw out against one of the best in the world, so you kind of hold back on it. I love Muay Thai and the whole sport of it and it is actually something that I would love to do after my UFC career is over.”

Lastly, Miller can be found honing that never-ending gas tank for his trademark come forward and often fighting style with Martin Rooney at Training for Warriors. “In my opinion, he is one of the best if not the best strength and conditioning coaches in the business,” asserts Miller, who gives credit to where credit is due for the previously mentioned best shape he’s been in for the Diaz fight to Rooney. “He's coached world champions in just about every sport. He's trained guys for the NFL combine. He's a phenomenal coach and definitely knows what it takes to train at a world class level.”

On December 29th, lightweights will collide in a war on the feet and on the floor when Miller battles Lauzon. “I like butting heads with somebody,” affirms Miller, who is excited to throw every technique he’s learned at Lauzon, who will be looking to do the same in return. “I'm going in there to fight as hard as I can and leave it all in there. I expect if the fight goes the full 15 minutes then I'll be dead tired and I won't be able to stand up. If that's not the case then I'm not going to be happy about it.”

The only thing that would be more satisfying than defeating Lauzon inside the Octagon is if the UFC let Miller build it first before fighting in it. Maybe that's a project for next year.