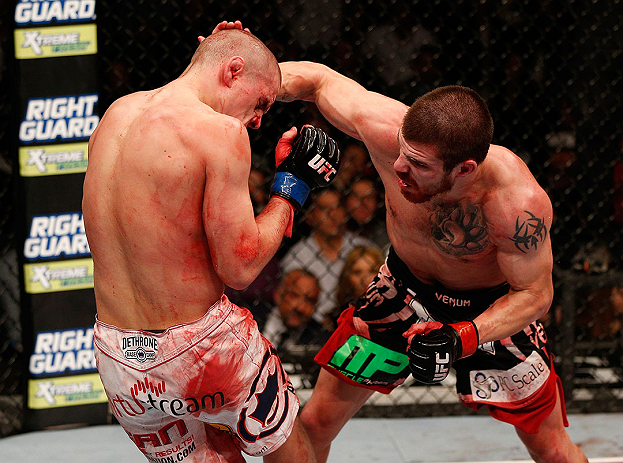 The canvas looked like a Jackson Pollock piece – abstract and violent, no rhyme or reason to the patterns that were created on top of it over the previous 20 minutes, give or take.

The artist responsible for the work, Jim Miller, stood in the center of his masterpiece, a hint of a smile on his face, his body tinted the shade of crimson that only comes when you mix blood with sweat inside the cage. His partner in the violent ballet that created the blood soaked canvas, Joe Lauzon, stood on the opposite side of the referee. He too was smiling, blood still trickling from the sizable gash Miller had opened on his forehead early in the first round.

“It was a fun fight to be in,” says the 29-year-old who pushed his record to 22-4 with his victory over Lauzon last December at UFC 155. “Joe’s a really great guy. It’s nothing personal when you’re in there; it’s mutual respect.

“We both threw everything we had at each other. I’m still disappointed in myself that I didn’t finish him, because I felt like I had him in the first, and that’s why I’m out there, to put guys away. But it was definitely one of those fights where we were both throwing as hard as we could, landing quite a few.”

The wildly entertaining lightweight battle earned Fight of the Night honors, and featured one of the more entertaining non-fistic exchanges to take place inside the Octagon.

At one point in the contest, time was called to deal with a loose piece of tape. Lauzon was inside Miller’s guard, blood dripping from his head onto his opponent as they waited for the restart. The two shared a laugh, expressing how much they were enjoying the bloodstained battle of skills that was momentarily on pause.

“That was kind of weird,” laughs the bearded, lightweight half of Whippany, New Jersey’s Fighting Miller Brothers. “That doesn’t happen very often where you get a little bit of time just sitting there with somebody bleeding on top of you, and you get to have a little conversation.”

After his in-fight talk with and subsequent victory over Lauzon, the conversation surrounding Miller has shifted to his place in the lightweight hierarchy.

In his first two years in the organization, Miller amassed an 8-1 record, his only loss coming to future title challenger Gray Maynard. The previous two years have netted another three victories, set against two defeats, one at the hands of current champion Benson Henderson, and the other against Nathan Diaz.

With an 11-3 record inside the Octagon that includes wins over Matt Wiman, Melvin Guillard, Charles Oliveira, and most recently Lauzon, Miller has established himself as a perennial member of the division’s top 10. Having solidified his position in the upper echelon, taking the next step and earning a title shot is next on his list of things to do, though the straightforward and honest fighter knows there are a lot of variables that factor into a fighter climbing the rankings to the point of being deemed a possible title challenger, especially in the UFC’s deepest, most talent-rich division.

“It really does come down to timing. You’ve got to just catch that wave, have a good performance, and stay on top of it. With months between fights, it’s really competitive and tough to stay relevant, stay on people’s minds when you’ve got all these other fights going on that you’re not involved in. It just comes down to timing and having a good night.

“In 2012, I was inside the Octagon for less than half-an-hour,” he continues. “In 2011, it was the roughly the same thing; maybe a little bit over a half-an-hour. That’s not a lot of time to make an impression, and it’s not a lot of time to show the things that you’ve been doing for years, and drilling for years, doing thousands and thousands – even tens of thousands – of reps. Sometimes the opportunity just doesn’t arrive in that short amount of time.

“My last fight, the opportunity arose and I was able to throw some things out there, and in the couple previous fights, it really didn’t happen.”

Miller knows first-hand what it’s like to be quickly replaced in the memory banks of fight fans.

Less than a month after he made his case for contention with his win over Lauzon, both TJ Grant and Anthony Pettis earned impressive first round stoppage wins on the January FOX show, replacing Miller as the fighter of the moment. This weekend, he’ll look to do the same to Josh Thomson, the former Strikeforce star who returned to the UFC last weekend in San Jose with a dominant performance against Nathan Diaz.

“It’s a little frustrating when that happens, but that’s the nature of the beast.”

Pat Healy will be the man sharing the 30 feet of fighting space with Miller inside the Octagon this weekend at the Prudential Center in Newark. After beginning his career at welterweight and earning wins over future UFC contenders Dan Hardy, Paul Daley, and Carlos Condit, “Bam Bam” made a successful transition to the lightweight division.

Healy has posted an 8-1 record since shifting weight classes, his only loss coming to the aforementioned Thomson nearly three years ago. He was twice scheduled to battle Gilbert Melendez for the Strikeforce lightweight title, but the bout never materialized as the champion was forced from the contest due to lingering injuries in each instance. In addition to carrying the frustration of missing out on a title shot in the cage on Saturday, Healy will also enter riding solid six fight winning streak, hungry to prove that like Thomson, he too belongs in the upper echelon of the UFC lightweight division.

“We knew the Strikeforce guys were coming in, and he was going to be the title challenger over there until (Gilbert Melendez) pulled out. He’s a tough guy, and a top guy coming over from Strikeforce, and we knew we would have to kind of sort these things out. They weren’t going to throw a Strikeforce guy versus a Strikeforce guy coming into the UFC; they kind of want to see where these guys (fall in the division), so this was really one of the fights that I expected.”

“He’s definitely a tough fight,” he says of Healy. “He’s a big lightweight, and has fought a lot of very tough guys up at ’70, and he’s got great control. He’s a very smothering type of grappler, and that’s something that I’ve had trouble with in the past; guys that kind of slow me down a little bit.”

Like every fighter, Miller wants to be the best, but he’s not fixated on the title or ready to take the microphone from Joe Rogan after a victory and call out the champion. That’s not his style.

Instead, he’s focused on the one variable that is within his control – earning another victory and delivering another memorable performance against Healy.

“You’ve got to leave your mark in people’s memories, and do something that they’re going to remember, something that makes them say, `I want to see that guy fight for the title.’  I take (Pat) very seriously, and I want to step in there, do my best, and make a statement against him.”

Saturday night in his home state of New Jersey, there will be a fresh canvas under his feet, and a new opponent across the cage, but Miller’s intention will be a familiar one.

He’ll be looking to “put on another beautiful display of violence,” he says, echoing sentiments he shared in latest edition of UFC 360 magazine.

After four months of waiting, the lightweight mixed martial artist is ready to create another blood-soaked masterpiece at UFC 159.