"I have some similar characteristics to guys that have beaten him, so that keeps my confidence up to where I know I just have to go in and fight my fight, do what I’m capable of, and put it to him." Jim Miller 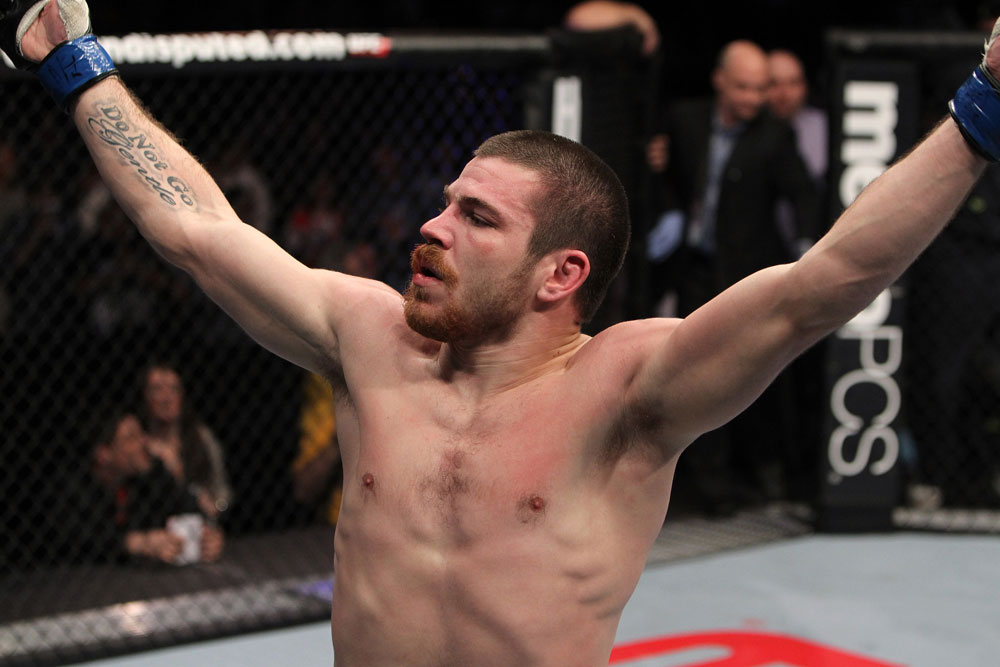 Last year, as Frankie Edgar and Gray Maynard remained locked into a trilogy atop the UFC lightweight division, a collection of fighters with championship aspirations built their cases for being next in line.

Among that group was Whippany, New Jersey native Jim Miller. A scrappy, blue-collar-to-the-core contender, Miller had put together a seven-fight winning streak since losing a decision to Maynard at UFC 96. The only other loss of his career came a little more than three years earlier against Edgar in a battle for the Reality Fighting lightweight title.

Injuries pushed back Edgar-Maynard 3 until October. In the interim, Miller was booked with another of those emerging contenders, former WEC champion Benson Henderson, in the co-main event of a Fight Night event in Milwaukee, Wisconsin.

Though it played second fiddle to a welterweight fight between Chris Lytle and Dan Hardy, most everyone viewed Miller-Henderson as the real main event. UFC President Dana White had announced a victory would elevate Miller to the top of the list of challengers — a chance to rematch one of the two men that had beaten him previously in a battle for the lightweight title. All he had to do was get through Henderson.

It wasn’t meant to be. Henderson controlled Miller throughout their three round encounter, sweeping the scorecards and halting Miller’s seven-fight winning streak at the same time. Henderson would go on to earn a title shot later in the year, and he completed his climb to the top of the division with a victory over Edgar at UFC 144 in February.

Along the way, the large crop of contenders that had bottlenecked at the top of the division back in the summer had been whittled down substantially. Henderson had dispatched Clay Guida after defeating Miller, while Joe Lauzon upset Melvin Guillard, ending his solid run of success. In December, Nate Diaz collected his second consecutive win since returning to the lightweight ranks, halting Donald Cerrone’s steady climb up the rankings with a performance eerily similar to those his older brother Nick had been putting forth in recent years.

Miller returned in January opposite Guillard, a pairing that would allow the winner to bounce right back into contention. Headlining the UFC’s maiden voyage on the FX network, Miller made the most of his opportunity, surviving an early power shot from Guillard that planted him on his backside to choke out his enigmatic opponent just over two minutes into the very first round.

The victory earned him a pairing with Diaz on the top of the UFC’s third show on FOX, a shot at the lightweight title going to the victor.

“You know, timing definitely does come into play,” says Miller in his standard laid-back drawl. “There were a couple guys there that if the title situation didn’t get as backed up as it had that could have fought — myself, Melvin, even Cerrone with five impressive wins. It’s just the way that it works out some times.

“Losing in August doesn’t erase the nine prior wins that I have in the UFC; those are still there. I’ve done that work, so it might not be as long of a streak now, but I’ve still beaten all the guys that I’ve beaten.”

If Miller seems unaffected by the twists and turns in the road to the lightweight title, it’s because the 28-year-old married father of two has never made what he does in the cage out to be anything more than a job. Training and stepping into the Octagon is his version of a 9 to 5, and though he’s very good at what he does, Miller refuses to let his career define him.

“I’ve always been that type of person where I never got too carried away with it,” he explains. “I try to have a lot of things going, and do a lot of stuff. I’m real close with my family, and I always knew that no matter what I do — fighting is just a sporting event, and a job for me. The situation with my nephew is one of those times where it solidifies that there are bigger things than getting into the Octagon.”

Daniel James Miller Jr. is the son of UFC welterweight Dan Miller, Jim’s older brother. The two-year-old boy was born with autosomal recessive polycystic kidney disease (PKD), and is awaiting a kidney transplant. Having already had both of his kidneys removed in order to prepare for the transplant, Danny Jr. undergoes daily dialysis treatment, and will be on anti-rejection medications for the remainder of his life.

“He’s doing all right; he’s been a lot better lately,” Miller says as an update on his nephew’s condition. “They’ve finally got him infection free. Hopefully he’ll be back home soon, and they can get that transplant.”

Watching your nephew battle through that, it’s easy to understand why the ups and downs of a career in the cage don’t seem to faze the lightweight half of New Jersey’s Fighting Miller Brothers.

On a different level, it’s the same reason being one half of the headlining act in his home state doesn’t get much of an emotional response from Miller either. Whether he’s fighting as part of the main event in East Rutherford or the first fight of the night in Butte, Montana, the workmanlike lightweight with a 21-3 record is still going to approach the task at hand the same.

“As a fight, it’s the same thing,” says Miller matter-of-factly. “When I think of it as fighting my opponent and what it’s going to be like that night, it’s the same as any other thing — the door closes behind me, and my vision doesn’t extend beyond that cage. I’m still getting locked inside of a chain-link fence with another guy who has been training for months to punch me in the face.

“There has been a larger media presence because of being on FOX and being the main event, and in this area, so there is more to it than normal, but that’s what I want.”

Some fighters make no effort to hide their contempt for the media obligations that accompany being a UFC fighter. As he explains the taxing and sometimes frustrating schedule of events that awaits him during Fight Week, it’s clear that Miller would prefer to be anywhere else during his final few days of weight cutting, but the consummate professional will take his seat at the pre-fight press conference, and fulfill his obligation with a smile on his face.

After all, it’s a requirement when you rise to the position of potential title challenger and main event fighter, and that’s a position Miller is happy to hold at this point in his career.

“There’s been some media and stuff, but it hasn’t been a burden. Fight week is definitely going to be a little more hectic, and that’s when it counts; that’s when it will have an effect. Even the first couple days are easy, but it’s the day before weigh-ins when it starts.

“That’s usually when there is a decent amount of media going on, and that’s when we start feeling it. We as fighters usually do a good job of hiding it because it starts to take a toll on you, and you start to feel a little miserable. When the weight starts coming down, you’re a little bit anxious, a little bit antsy, and a little short, but it’s all part of the job.”

While making nice with the media is a piece of what he does for a living, stepping in the cage with Diaz on Saturday night is where he’ll really earn his keep, and potentially the title shot that has eluded him thus far.

The younger half of the Diaz Brothers has looked impressive since dropping back down to the 155-pound ranks following back-to-back losses in the welterweight division in the first half of 2011. Precise boxing, high punch counts, and a slick ground game have fueled his successful return; the same recipe that has turned his brother Nick into one of the top pound-for-pound fighters in the sport today.

Though he admits that Diaz will be a difficult challenge once the cage door closes, Miller is buoyed by the fact that the talented trash talker who won Season five of The Ultimate Fighter has struggled against opponents with a skill set similar to the one he will carry into the Octagon on May 5 at the IZOD Center.

“Nate is a very tough fight for anybody in this weight class; he’s as tough as they come, and very well trained. His boxing in his last fight was awesome, and cardio-wise, his volume of punches that he threw was pretty incredible to watch. He’s good on the mat too, so it’s a tough fight.

“I have some similar characteristics to guys that have beaten him, so that keeps my confidence up to where I know I just have to go in and fight my fight, do what I’m capable of, and put it to him because he has shown that little bit of weakness. It’s about trying to capitalize on that.”

Miller will be ready to put in an honest day’s work come fight night, just as he has in each of his previous 12 trips inside the Octagon. As for how he intends to deal with the trash talk that is likely headed his way in the days leading up to the fight, and once he and Diaz are alone in the cage?

“I honestly haven’t worried about it. I just completely disregard it, so it doesn’t matter to me. It’s not going to get a rise out of me.”

Listening to trash talk isn’t part of the job description.