"I want complete and utter domination and destruction. I
want the first mistake he makes to be the last mistake and the one that
ends the fight." - Jim Miller 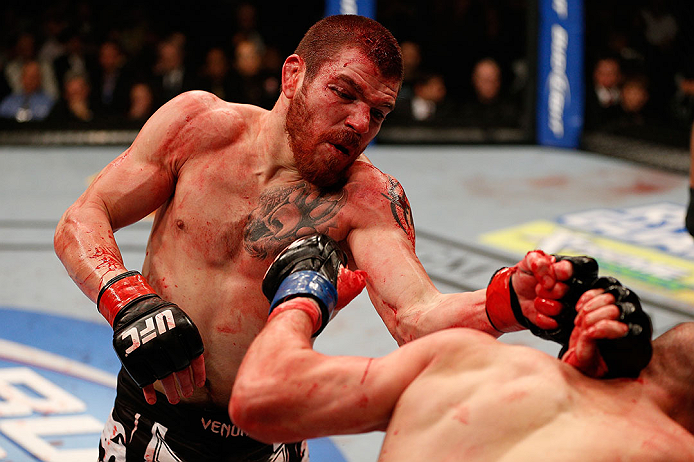 Jim Miller is well aware of the expectations attached to his UFC Fight Night main event against Donald Cerrone this Wednesday. Both are all-action fighters with more than their share of post-fight bonuses padding their wallets. But if Sparta, New Jersey’s Miller has his way, it won’t be a Fight of the Night or Fight of the Year candidate; it will be something different.

“I want complete and utter domination and destruction,” said Miller. “I want the first mistake he makes to be the last mistake and the one that ends the fight. Everybody’s dangerous, and the longer the fight goes on, the more risks there are for me, so I’m looking to put him away early.”

I guess a Performance of the Night bonus wouldn’t be bad either, but for Miller, all that matters is the win. And with Cerrone sharing a similar mindset, there will still be fireworks, and Miller knows it.

“We’ve been ranked around each other for the last couple years, and I think we fought four similar opponents and we’ve had the same outcome with everybody,” he said. “The guys that he’s lost to I lost to, the guys that he’s beat I beat, so it’s kind of a fight that has been in the making for a couple years now and it just never fell together. I’m excited for it because it’s a fun fight, he’s a talented guy and one of the guys I really like watching. I like his style of fighting, it’s a tough challenge, and I like that. That’s what I want. So I’m excited for the fight.”

Miller should clarify that statement – he’s excited for every fight. At home in Jersey, in Vegas, in England, it doesn’t matter. When the 30-year-old lightweight contender gets that call, he couldn’t be happier. But does a home game get him even more amped up?

In 29 pro fights, Miller has fought 16 times in the Garden State, including the first 12 bouts leading to his UFC debut in 2008 against David Baron. Even in those early days battling it out on the local circuit, the goal was always the same.

Again, we must clarify. At that point (and today as well), Miller probably would have fought Anderson Silva at middleweight if someone asked him to.

“Yeah,” he laughs. “I would have fought anybody at ’85 too. I trained with my brother (UFC fighter Dan) for all these years and my style of grappling and fighting is actually more geared towards fighting a guy that’s bigger than me, so I’m comfortable with somebody that has to cut down to ‘85 because I can walk around at ‘85 and a little bit above.”

“205 is a little big,” laughs Miller, who will keep busy between fights with the gym he and his brother are opening in Sparta sometime this August. For the brothers, it’s a chance to start a new business while also having a place to train that Miller estimates will be four minutes (with traffic) away from his house.

“Dan and I were born and raised in Sparta, we’ve been looking for a place for a little while, and it happened to open up in our hometown,” he said. “It’s exciting. We got a good space, we’re trying to do everything right, and we’re setting up a facility that we’d like to train at and that has everything that I think we need.”

In the meantime, what Miller needs is a win. Not because he has to snap a losing streak, but with a 3-0, 1 NC record in his last four bouts, a victory over Cerrone keeps him moving toward his eventual goal of a world championship fight. Not that he sees that as something on the near horizon.

“This is a big fight because I’m fighting somebody who’s ranked above me and that hasn’t happened in a while, so I’m excited for it,” he said. “There’s always pressure to move up the rankings, move your career along and everything like that. But unfortunately, the title in my division is stagnant right now. (UFC lightweight champion Anthony) Pettis is a talented fighter, but he seems to be a bit injury prone. I could win this fight, win another fight against another top contender and still be in limbo. I like to fight and the way the title picture is now, it’s still three, four fights away to earning that shot. So I don’t really worry about it because the title’s not even the picture right now for me.”

When Miller says that, he’s not complaining or crying about the way things are; he accepts them and deals with what’s on the plate right now. That’s “Cowboy” Cerrone and a fight fans want to see and he wants to finish. But he’s not thinking about how it ends. He’ll let his inner autopilot handle that.

“I try to train to not have to think about it,” said Miller of finishing fights. “I want to be a very cerebral fighter and see everything and be the conductor of it. But what I excel at is making these complex things a reaction. I get him to move into a spot where everything feels like it does in training, in drilling, and then it’s just autopilot and everything kind of happens before I even have the opportunity to realize what’s going on and pounce on stuff. That little mistake, that’s all I’m really looking for.

“I’ve been training for over nine years now, and I’ve got thousands of reps of certain moves in me, and some of them tens of thousands, so I’m letting everything do what it’s supposed to do and letting the machine work on its own and not try to run it,” he concludes. “When it does that, I usually have a pretty good night. I try to keep my head out of it, remain calm, remain loose, and let everything go.”