For a good number of years, Jim Alers has been a road warrior, packing up his bags and taking on tough competition around the globe.

After starting his career with eight fights on U.S. soil, “The Beast” spent the next three years collecting air miles and victories, touching down and having his hand raised in Bahrain, Jordan, Scotland, Wales and Ireland. His UFC debut was no different, with the Floridian venturing to Abu Dhabi to score a hard-fought decision win over fellow upstart Alan Omer in April 2014. It wasn’t until he got the chance to compete in the United States again that Alers’ run of success came to a halt. 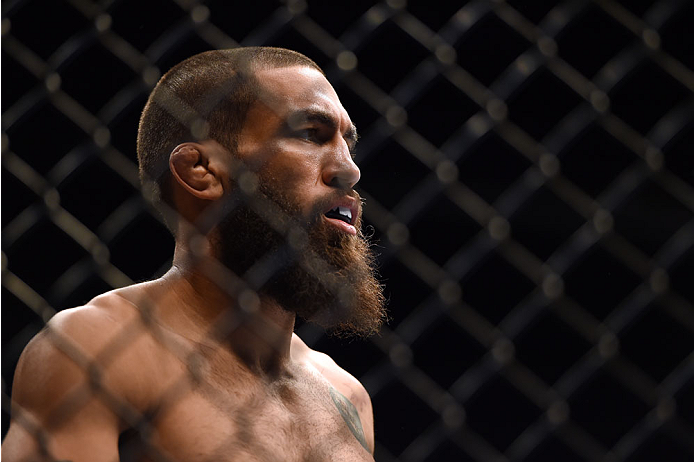 Back in February, the 29-year-old came out on the wrong side of the result against Chas Skelly, succumbing to the Texan’s power in a fight that came together five weeks before the event and arrived at a time when Alers was just getting his feet wet with a new gym.

“It’s been a real crazy year,” the always upbeat Alers laughs. “Before the Chas Skelly fight, I had just moved down here in December, so I had about a five-week camp for that with a new team. I was at American Top Team and at first, I thought, ‘Man, look at this team – it has so many UFC fighters; this is going to be the camp for me.’”

It didn’t work out that way.

Alers didn’t like the fit, there were conflicts and he once again set out looking for a place to call home. In the midst of a tumultuous time, a friend reached out and extended an offer that had been made several times over in the past and this time, the 13-2 former Cage Warriors standout accepted.

“I had my daughter a couple months after the fight and was coming off my first loss in 10 fights, that was hard to deal with too, lots of ups and downs. And then Josh Samman…”

Before he can finish his sentence, Alers breaks out laughing, having pronounced the promising middleweight talent’s surname as salmon.

“Samman, sorry; he’ll get mad if I call him that,” he says, correcting the pronunciation. “He kept telling me to come to MMA Masters and finally I was like, ‘You know what? I’m going to do it.’

“From the first day, everyone was so welcoming to me. Even though MMA Masters is a big gym and they have a lot of great guys there, it has that small gym feel. They welcomed me, we joke around, but we’re getting work done every day. Now I’m happy again; I’m happy training, where in my last fight, I felt like I was going through the motions.”

Now he’s ready for his homecoming.

This weekend brings Alers’ career full circle, as he returns to Orlando to compete at home for the first time since the second bout of his career seven years ago.
Fight Night Orlando fight card
“My first two fights were in Orlando and I just remember those fights and just thriving off the passion of the crowd, so I’m happy to get back there and do it again,” he says. “I think the gym that I was a part of in Orlando already sold over 200 tickets, so right there I know I have those people there for me, so I’m excited.

“I went to Magic games at the Amway Center with my family growing up, so to be there, in front of my family and my friends – my mom and dad have never been to any of my fights, so it’s going to be good to win in front of them.”

In order to complete the perfect trip home, Alers will have to clear a difficult hurdle in a fight that now carries a little extra awkwardness, as Saturday afternoon, he’ll share the cage with Cole Miller, a battle-tested veteran and proud member of American Top Team.

“The crazy part is that Cole was one of the guys that I got along with while I was there,” Alers says of being paired with someone from the gym he fell out with earlier in the year. “When I got the message from (UFC matchmaker) Sean Shelby about the fight, the first thing I did was write to him and say, ‘I don’t have a lot of pull in the UFC; this is only my third fight. I can’t tell them I’m not going to fight. It’s just business and if you want to do this, let’s put on a good fight’ and he was all for it.”

The lightweight combatants are in very similar places in their careers. opines Alers, noting that he and Miller both last fought in February, had their children at roughly the same time and bring strong jiu-jitsu pedigrees to the Octagon for their preliminary card encounter.
READ: Hello America, my name is Jim Alers

While Miller has a decided advantage in experience at this level, Alers feels like since he’s already dealt with his nerves and felt both the thrill of victory and the agony of defeat, his third appearance inside the Octagon will be his best.

And if Miller and his coaches believe they know what to expect as a result of having had Alers in the gym for a few weeks earlier this year, he says they’re going to be mighty surprised come Saturday night.

“I think the lights of the UFC got to me. My first fight, I think I could have come out a lot better, but I pulled through and I got the win. My second fight, I didn’t feel like me and I lost, but now that’s all out of the way. I’ve got a win in the UFC. I’ve got a loss in the UFC. Everything is out of the way. Now it’s just time for me to go out there and show everybody why I was chosen to be in the UFC and be the old Jim with a lot of new tricks.

“I’m going to go back to just fighting off instinct. Whatever is given to me, I’m going to go for. We’re both submission specialists and if it goes to the ground, it’s going to be fun.

“They’re going to be in for a big surprise, because if they think they know who I am from watching me train, they’re going to have another thing coming to them.”