UFC Bantamweight Jessica-Rose Clark Is Determined To Achieve Her Goals At All Costs.
By Thomas Gerbasi, on Twitter: @TGerbasi • Jul. 1, 2022

The pomp and circumstance of UFC International Fight Week can be intoxicating for a fighter competing on the card that highlights the festivities in Las Vegas. 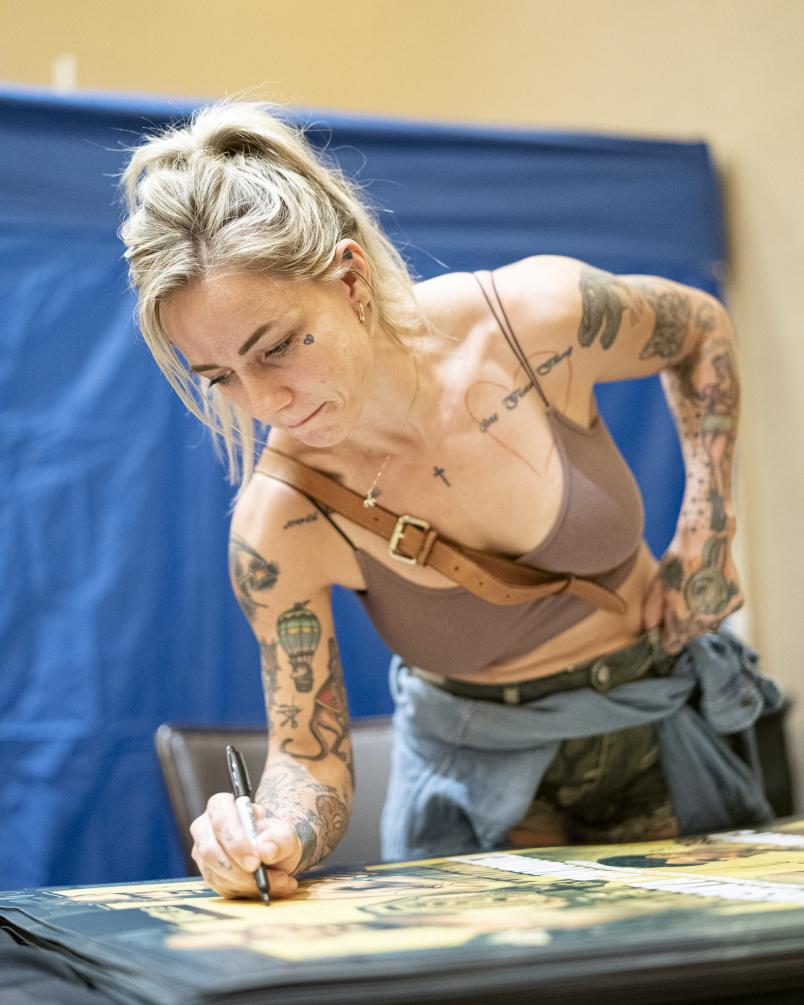 Getting up at 5am to drive an hour-an-a-half to get to the gym to train for that fight? Not so much.

But it’s a price bantamweight Jessica-Rose Clark is willing to pay. Just don’t call it a sacrifice.

“When I first started kickboxing in 2011, I had zero direction for my life, and the very first kickboxing session that I went to, it was like a switch flipped for me,” said Clark. “I knew instantly. Within ten minutes of starting that kickboxing class, I knew that was what I wanted to do. And I've been doing it for 11ish years and I can't see myself doing anything else. There's not many other things that I would give so much time to, but this keeps me so fulfilled. I still feel like I'm a baby in the sport and I still feel like I'm growing and learning all the time, and part of the things that come with that is, I don't even want to say sacrifices because I'm not giving anything up. It's just putting in the hours. So I'm still at the putting in the hours stage.”

The hours are in the bank for Clark’s pivotal eighth trip to the Octagon to face Julija Stoliarenko at UFC 276. It’s pivotal because the Australia native wants to right her ship after seeing her two-fight winning streak snapped by Stephanie Egger in February. It was a disappointing result for the 34-year-old, but not one that’s discouraged her. That ability to rise from the knockdowns life and the fight game have dealt her made Clark a fan favorite, as well as a pioneer for the still-developing women’s MMA scene back home.

Unfortunately, sometimes progress requires change, and to get to the point where she could represent her nation on the world stage, she had to leave home. By 2016, she was in Las Vegas, and now her base of operations is in California, where she trains with Kirian Fitzgibbons and the CSA crew in Dublin, along with the Team Alpha Male squad in Sacramento. And though Clark believes she could have still made it to the UFC while living and training down under, to be the best fighter she could be, she had to pack her bags and leave.

“I would have had to hunt a lot harder for the right training,” she said. “I have a really great gym in Sydney that would have served as a base camp, but the issue with being back in Australia is that I never really had any female training partners because there were so few of us on the scene, and I fought all of them and we all lived so far away from each other. So I definitely think I could have still been successful, but to be honest, I actually moved to the U.S. with the goal of training with the coach (Fitzgibbons) that I have right now. So I think if I had stayed in Australia, I always would have felt like I was missing out on something because I knew the gym I wanted to be at and I knew the coach I wanted to learn from.”

The alliance with Fitzgibbons has produced a 2-2 record thus far, but beyond the numbers, Clark has seemed more at peace with the pressures of life at the top level of the sport, and realizing that sometimes, it’s just not your night. But when it is, Clark can hang with the best at 135 pounds, and that’s a beacon of light for the fighter and for the ones she hopes to reach with her platform.

“I do want to go back to Australia soon and I realize that there's not really any Australian women that are really doing it anymore,” she said. “In the UFC, there's myself and Casey O'Neill. In Bellator, there's Arlene Blencowe and Janay Harding, but that's pretty much it these days and I don't even know of any up-and-coming Australian women that are fighting. So I was thinking about that and trying to figure out if there's anything I can do to help switch that, to encourage more Australian women to get in the sport. Because realistically, Casey O'Neill's still really young and she hasn't been doing it that long, but the rest of us - myself, Arlene and Janay - we've been doing it for a while, and once we're out of the sport, who's left? So I would like to be a better representative of that and I would like to figure out how I can encourage more Australian women to get into the sport and show them that it's possible. I'm not entirely sure how I do that yet, but that is part of my plan for when I go back home is to figure that out because it makes me sad that we might be the last of the Aussies on the big stage for a while.” 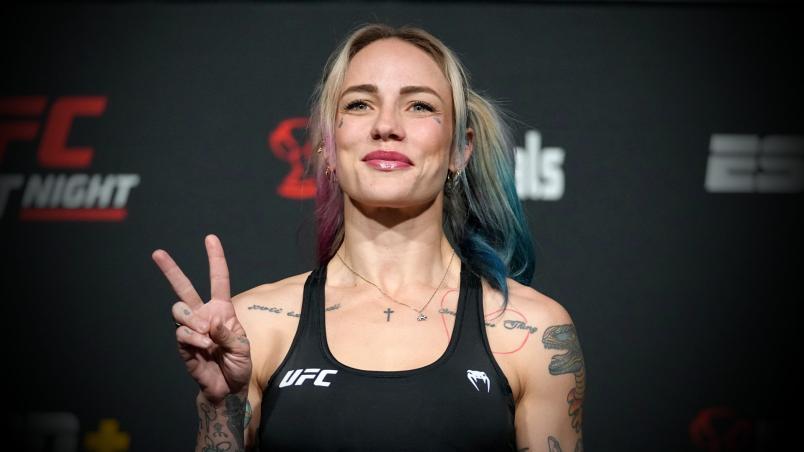 Jessica-Rose Clark of Australia poses on the scale during the UFC Fight Night weigh-in at UFC APEX on February 18, 2022 in Las Vegas, Nevada. (Photo by Jeff Bottari/Zuffa LLC)

So no ego-enticing ideas of being the last in line?

“No,” Clark laughs. “I want to be the one that opens doors for following generations.”

It’s an admirable goal, but let’s not forget that Clark isn’t about to give up fighting for an ambassador’s role. She’s won two of her last three, she’s got a fight opening up one of the biggest cards of the year, and yeah, she’s still one of the toughest outs in the division. Not surprising, as the ladies of MMA tend to have an extra valve in their heart when it comes to this hardest of sports.

“I'm not gonna say women are tougher than men,” said Clark, who was then told that I’ll say it for her. “I just think that realistically, as a 34-year-old female, if you want to talk about sacrifice - which I don't think any of it is a sacrifice; it's never a sacrifice if it's for something that you love - but a lot of us mid-30s women who are still fighting and competing at a high level, we are ‘sacrificing’ having families, having traditional marriages. We give up a lot of traditional female things and roles, maybe, so that we can pursue this. So I think once you've made that decision, yeah, I'm gonna have this non-traditional female career, and there's a lot of things that the majority of women do throughout their lives that we're not gonna be able to do, it's easy to put in the hours that you need to put in to get what you need.”

No, not easy. But for fighters like Clark, it’s necessary. That’s enough to inspire any fighter back home, male or female.

“Especially being an Australian woman, I feel like I've already done so much, and the fact that I've only completed three percent of my mission, it’s definitely what keeps me engaged and what keeps me coming back time and time again, even after a loss, even after all the heartbreak that comes with that. I still have so much left to do, so I'm gonna keep going until I physically can't.”