Jessica-Rose Clark Is Happy, Healthy And Ready To Scrap

After Recovering From Knee Surgery And Falling Back In Love With MMA, Jessica-Rose Clark Can't Wait To Fight
By Zac Pacleb, on Twitter @ZacPacleb • Oct. 21, 2021

Jessica-Rose Clark just wasn’t feeling it as she trained to fight Pannie Kianzad at UFC Fight Night: Magomedsharipov vs Kattar in November 2019. Not just physically, although a major foot injury kept her from going all-out for most of camp, but mentally, she was just not into the idea of mixed martial arts.

“I just hated this sport,” Clark said. “I hated fighting. I hated training. I would wake up in the morning, I would just dread going, but I had nothing else. That was what I kind of realized through the lead-up to Pannie was that I just wasn’t enjoying it. And then I fought, and I hated every single moment of that fight. I hated fight week, I hated traveling, I just hated everything about it.”

Her coach, Kirian Fitzgibbons, could sense as much. After the fight, he sat Clark down for a heart-to-heart with the Australian to find out what was going on.

“I didn’t want to be vulnerable,” Clark said. “I wanted to be a tough guy, like, ‘I’m a fighter. I’m Australian. We’re tough. We should be able to get through this.’ He sat me down, and he was like, ‘You gotta talk to me. You gotta communicate with me. I need you to make me a promise that you would,’ and then once I started doing that and realized that he wanted to see me succeed just so that I would be happy, not that there was any benefit or gain for him, that really allowed me to let go and just be in it and be in every moment and not focus so much on external s**t.” 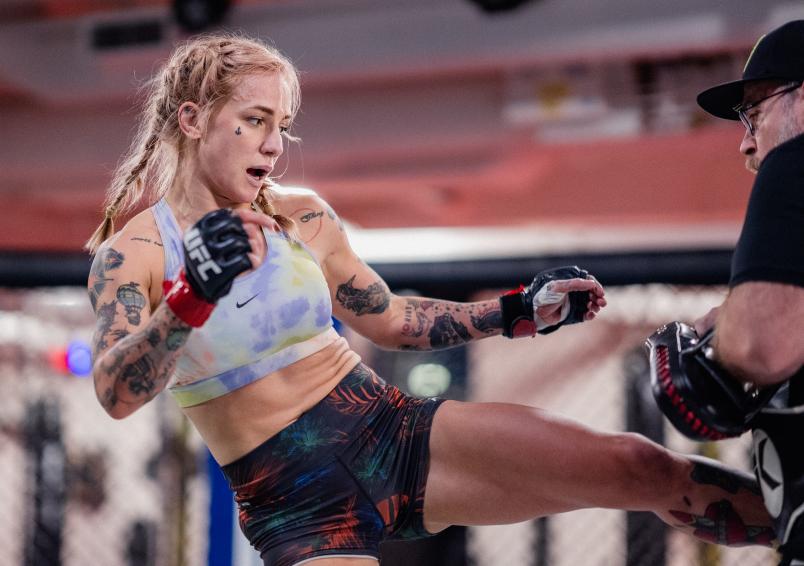 For the next year, Clark tried to figure out if she could fall back in love with the sport, and with Fitzgibbons, she did just that. Clark got herself a new therapist and a sports mindset coach, and by the time she signed a bout agreement to face Sarah Alpar, it was full steam ahead for “Jessy Jess.”

Not a whole lot went wrong in Clark’s TKO win against Alpar last September. Clark’s performance was indicative of all the work she put in the previous year, and it was all happy days when she got her hand raised that night in the UFC APEX. Sure, the bumps and bruises that come from a fight would hurt later, but an unpleasant surprise revealed itself when she got an MRI on her knee. Clark felt a little bit of instability in her leg after the fight, but nothing really to catch her attention, and after the scan, she saw she tore her anterior cruciate ligament.

“It just felt kind of wrong,” Clark told UFC.com. “It just felt off, and then after the fight, it still wasn’t painful at all. It was just a little bit of instability, and then I got the MRI, and I was like, ‘Oh, s**t. Guess who gets to have surgery?’”

Naturally, frustration came in waves. Clark had just gone through a major injury recovery when she hurt her foot in 2018, an injury that lingered throughout fight camp leading up to her loss to Kianzad. Against Alpar, Clark looked healthy and fluid, and a torn ACL was the furthest thing from rebuilding any sort of momentum in her career. 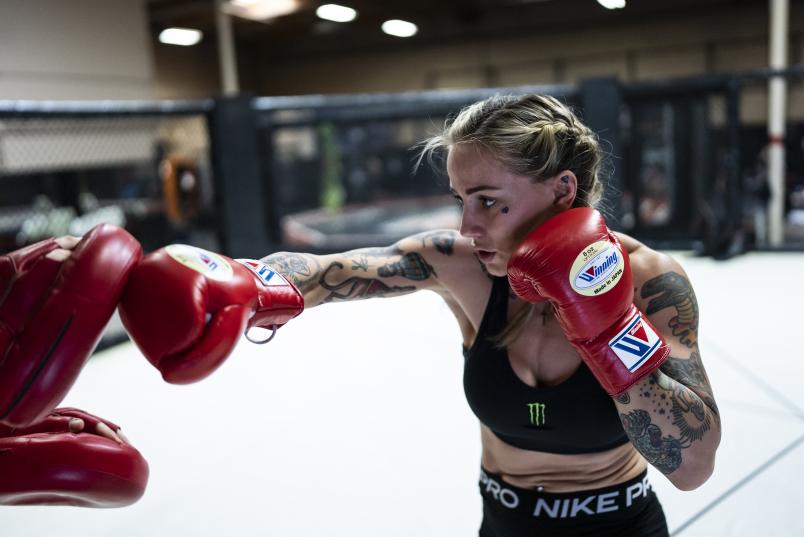 Not that multiple major injuries are a positive thing, but Clark did take solace in the definitive timelines provided in the recovery process this time around compared to the “wait and see” approach she needed to take with her foot. She and her physical therapist went with an “aggressive” rehab process, and nine months after surgery, she was cleared for full-contact and almost immediately signed up to fight Joselyne Edwards on October 23. It took some patience, but she also took advantage of the opportunity to rebuild herself into an even better athlete.

“There were definitely difficult days when I’d go and try and do something, and I was like, ‘F**k. I can’t do this yet,’” she said. “I remember the day I got cleared to jump rope, and so that day, I went to the gym and I jumped rope for like 40 minutes and then couldn’t walk for three days afterwards. There was a lot of frustration, but it almost made me feel like I was a student again.”

Clark gets to test her refined athleticism against Edwards, a Panamanian striker who split her first two fights in the UFC. 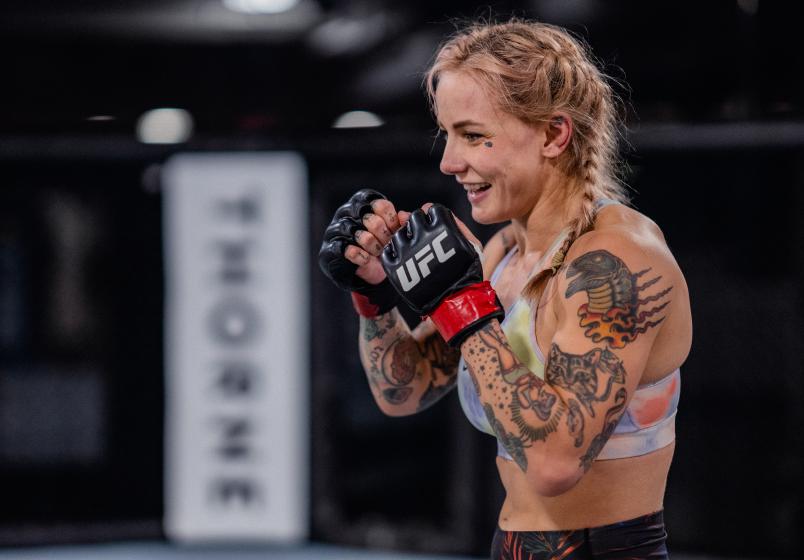 The first Panamanian to earn a UFC victory, Edwards boasts eight finishes, including six inside the first round. The matchup is an interesting one physically and stylistically. Clark thinks of herself as a “baby bantamweight,” and that description is definitely fitting against Edwards, who will have a three-inch reach and height advantage on Clark.

In Clark’s mind, that’s all the more reason to go for it once the Octagon door closes.

“I think the things that (Edwards) does well, she does really well,” Clark said. “When they offered me her, I was like, ‘Cool, let’s go have a look,’ and I saw that she was a striker, and I was like, ‘Yeah, that’s what I want. Let’s make this s**t exciting,’ because striker-versus-striker is either really boring or really entertaining, so I was like, ‘All right, this is going to give me an opportunity to make this fight really entertaining.’

“I feel like this is my first foray into the bigger part of the division,” Clark continued. “There’s a lot about this fight that excites me, and my whole goal is just to get to the end of it, win or lose, and have people go, ‘F**k, that was sick.’ That’s it.” 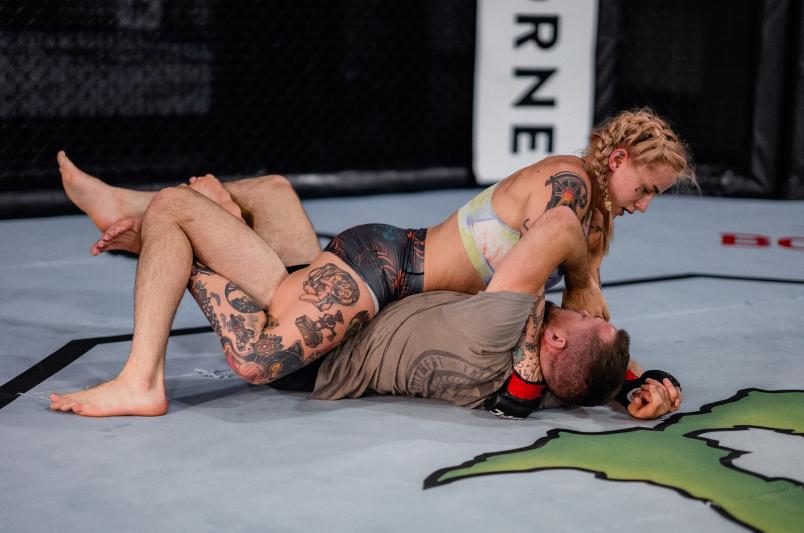 It seems like, after a few years of injuries and disenchantment with the sport, that Clark is in the best place of her career ahead of this fight. She is both in a new, better place in how she approaches the sport as well as searching for ways to get back to the roots of why she loves it, and when she steps into the Octagon, she has a simple message she wants to deliver everyone watching.

“Just that I’m a dog,” Clark said. “I got away from my heritage, my country, for a long time. I moved to America five years ago, and I was like, ‘F**k yeah, I love being here,’ and I kind of lost that touch of home, so I’ve really been trying to find that again and remember what it was that got me to where I am now, and that was just: Aussies are tough. We’re tough. We love to scrap. We don’t want to take a step back. We don’t want to back down, and that’s it. I want to get to the end of this fight, and I want people to be like, ‘Yeah, she’s a f***ing Aussie.’”