Jessica Penne: Ready for Her Close Up 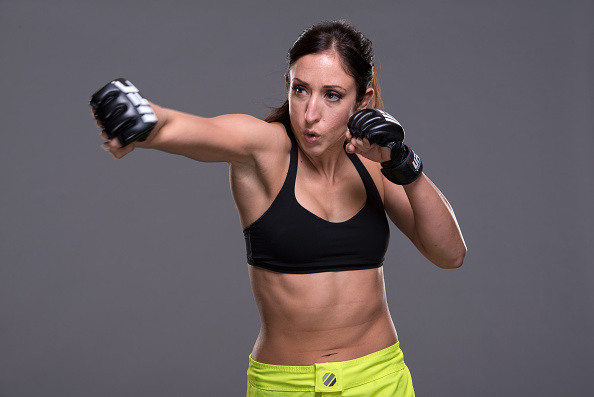 If Jessica Penne can join Fabricio Werdum, Daniel Cormier and Rafael dos Anjos as one of the group of recent UFC title winners by defeating another newcomer to the championship ranks - Joanna Jedrzejczyk - this Saturday, don’t expect an Octagon filled with family and friends celebrating the victory at the O2 World Arena in Berlin.

That celebration will have to wait until she returns to Southern California.

“I have a rule of no family members at the fight,” Penne said. It has nothing to do with superstition or any bad past experiences. It’s just one of those mom things.

“My mother is to blame,” she laughs. “She went to my first amateur fight, and all I could hear is her screaming and yelling the entire time and it was a little distracting. I ended up winning, so there was no harm done, but just seeing how anxious and stressed out and excited she was, I just feel like it’s better they watch it at home.”

It shows the level of dedication and motivation that Penne has at the moment that even for the biggest fight of her career, she’s keeping things as business as usual as possible. There were some changes before the fight though, as she made the move to San Diego and the Alliance MMA gym to shake things up after her Fight of the Night win over Randa Markos last December.

“I was looking for a little bit of a change,” she said. “I loved Reign Training Center and all of my teammates and coaches, but I had to travel around and go to a lot of different gyms. So I had the opportunity to come down and train with the head coach, Eric (Del Fierro), and I love his coaching style, I love the team environment at Alliance, and it’s something I haven’t experienced in a really long time. I feel like it’s motivated me to be even better. There are some killers in that room.”

From Dominick Cruz and Myles Jury to Jeremy Stephens and Johnny Case, there is a star-studded lineup in San Diego, and when you’re fighting for a world title, the more killers the better. But Penne wasn’t preparing for Jedrzejczyk in her first Alliance MMA training camp. Instead, her second UFC bout was scheduled for May 30 in Goiania, Brazil against Juliana Lima.

A month before the bout though, Penne was out to lunch with her teammates when the phone rang.

“I was asked to go someplace where nobody could hear me, and (UFC matchmaker) Sean Shelby gave me the great news,” she recalled. “Obviously I said ‘yes,’ and the feeling when I got the call was excitement. Fighting for the belt is what everybody dreams about.”

But is she ready?

“Of course I feel like I’m ready,” she says, eyes lighting up at the idea of fighting for a world title, and more importantly winning a world title. “I definitely knew that I would get the opportunity to fight for the belt one day. I’ve been in this sport a long time and I know I’m one of the best in the world.”

That’s why she’s ready. Despite introducing herself to UFC fans just within the last year through The Ultimate Fighter 20 and her subsequent win over Markos, the 32-year-old Penne is a seasoned grappler with a Jiu-Jitsu black belt to her name, and an equally experienced MMA fighter, putting together a 12-3 record since turning pro in 2006. But she’s still moving forward, with each fight displaying the evolution in her game.

“Every time I compete I feel like I show another layer to my training, and I’m always trying to improve and always working hard at my craft,” she said. “So every fight I feel like a different person going in there.”

But is the latest incarnation of Penne prepared to face Poland’s Jedrzejczyk, a former multi-time Muay Thai champion whose striking and takedown defense has allowed her to go from European prospect to world champion in three UFC wins over Juliana Lima, Claudia Gadelha and Carla Esparza?

“I think Joanna is one of the top fighters in the world,” Penne said. “She’s a very high-level striker outside of MMA, and she really brings the fight, but I’m definitely looking forward to the challenge. I love challenging myself with great fighters like her, and I’m out here to prove that I’m the best. I have a lot more experience, I’m more well-rounded and I know she doesn’t want to go to the ground with me. I definitely plan on going in there and submitting her.”

Well, there’s the game plan, but neither fighter’s approach to Saturday’s fight is much of a secret. Jedrzejczyk wants to keep it standing and Penne wants it on the ground. The winner will likely be the one who can be successful in the other’s strongest area, and Penne is sure that she can do just that over five rounds or less.

“Every fight I’ve had has led me to this point, and I feel very prepared and confident,” the former Invicta FC atomweight champion said. “I feel that I’m in a great place in my career, I’m in my prime, and I’m ready to show everybody that I’m one of the best in the world. I’m definitely going in as the underdog, but I don’t mind. The victory is that much better.”

“I can’t spell Joanna’s last name, but I feel like since we’re gonna be face-to-face and locked in a cage together, we can be on a first name basis.”